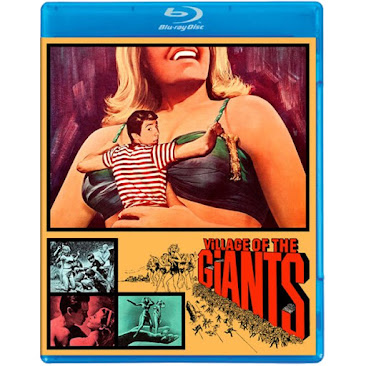 What did mid-century adults fear more than anything? Teenagers! Genre-movie maestro Bert I. Gordon (The Amazing Colossal Man, Earth vs. The Spider) turns the concerns of the aging establishment into a teen dream with his 1965 fun-fest Village of the Giants, filmed in Perceptovision!

The plot is wafer-thin: Mike (former Disney kid Tommy Kirk) and his girlfriend Nancy (Charla Doherty) are smooching on the couch while her parents are out of town. In walks her science-obsessed kid brother (Ron Howard, half-way through his stint on The Andy Griffith Show) with another failed lab experiment. Or is it? When the cat snacks on the pink concoction bubbling out of a beaker, it grows into a massive behemoth, and the same thing happens when the dog licks the "Goo" too. "Hey, think of what this could do for the cattle industry," an enterprising Tommy Kirk says. Further experiments follow. Meanwhile, some rebellious rich kids from out of town get caught in a mudslide after their car careens off the road. Stranded, they wander into this quiet, orderly neighborhood looking for some trouble and find exactly that when they discover the nice young people and their growth Goo. Before you can say "far out, man", the adolescent ne'er do wells have stolen the formula and turned themselves into giants. That's when the trouble really begins. 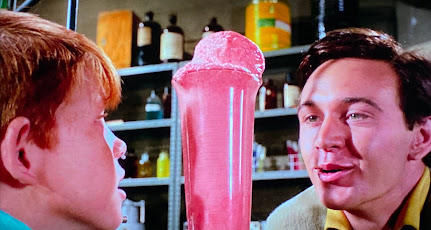 Village of the Giants is my kind of shindig. Loosely based on "The Food of the Gods" by H.G. Wells, it adeptly combines many of my favorite 1950s and 1960s movie flavors into one tasty confection, setting up camp at the crossroads of the juvenile delinquency, rock and roll, hot rod, science fiction, and beach party genres. The central good teen vs bad teen battle comes straight out of an AIP beach movie. Frequently, the gang stops whatever they're doing for an impromptu dance party complete with bikinis, belly shirts, and hot pants. We're only missing Captain Geech and the Shrimp Shack Shooters. A red-wigged Toni Basil--the choreographer-turned-star who years later recorded the early MTV hit "Mickey"--appears as a young go-go dancer. 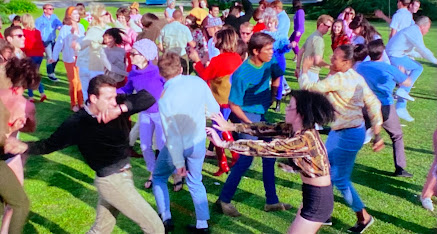 Musical performances are provided by recognizable mid-sixties acts like The Beau Brummels, Freddy "Boom Boom" Cannon, and Mike Clifford. Also, much of the score for the film was handled by Jack Nitzsche, a songwriter and composing giant who was Phil Spector's collaborator and who wrote a string of hit pop songs for established acts before later going on to score films like The Exorcist and One Flew Over the Cukoo's Nest. Perhaps his greatest contribution to Village of the Giants is a surf-soaked instrumental piece called "The Last Race" which plays over the title sequence and several times throughout the movie. Decades later, Quentin Tarantino would repurpose the track for his own film, Death Proof, the latter half of the 2007 Grindhouse double bill. In Village of the Giants, the song isn't even credited! 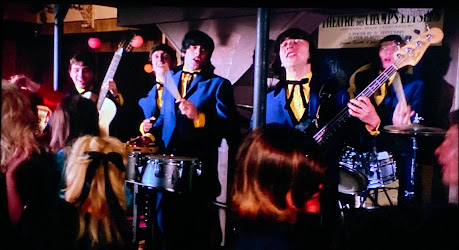 This mid-sixties exploitation spectacle from Joseph E. Levine's Embassy Pictures stands apart from its Disney and AIP brethren by pushing the envelope farther than either competitor would have been willing to go at the time. There's a joke about Toni Basil losing her bikini top, and when the delinquents all grow into giants half-way through the movie, they tear straight through their clothes Incredible Hulk-style, leaving everybody naked and covered only by their hands. There are also a couple of fist-fights, a kidnapping, and lots of slow motion footage of the delinquents dancing while wearing almost nothing. Close up shots of tanned and bikinied bosoms and bottoms must have been really mind-blowing in 1965, an era where Barbara Eden's belly button couldn't be shown on television. In fact, the censors required that certain shots be removed from the film before it could be released. On top of all of this, the Goo that the teenagers take is clearly a metaphor for LSD, which they take together as a group. Those that aren't sure they want to experiment are peer-pressured into ingesting the foreign substance. 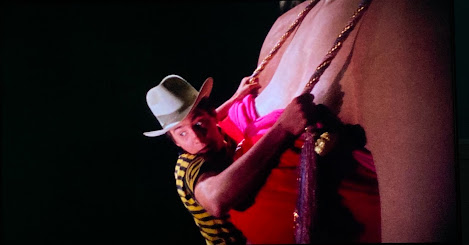 As with many of the rebel youth films of the 1960s, the cast is populated by a who's who of young talent. Tommy Kirk (the boy who shot Old Yeller) had recently been fired from his Disney contract and was finding work hard to come by thanks to recent sex and drug controversies. Johnny Crawford had recently come off of a five-year run on TV's The Rifleman and was finding troubled teen movies to be a stepping stone to other work. Joy Harmon was a relative newcomer who would go on to guest on Gidget, Batman, Gomer Pyle, U.S.M.C., Bewitched, That Girl, and The Monkees before getting big screen attention again in Cool Hand Luke alongside Paul Newman. Character actor Bob Random made the usual television rounds as well, appearing on everything from Gunsmoke to Gidget. Ron Howard's dad, Rance Howard, even appears as a sheriff alongside Joe Turkel, who Kubrick fans will know from The Killing, Paths of Glory, and The Shining. The rest of the cast seems to be filled out with the offspring of Hollywood's Golden Age stars. Beau Bridges (son of Lloyd) plays one of the teen ruffians and took the part very seriously, going as far as to rewrite one of his bits of dialogue into a soliloquy about what young people want from the world. Tisha Sterling is the daughter of actor Robert Sterling and Ann Sothern. Tim Rooney (son of Mickey) is here too. 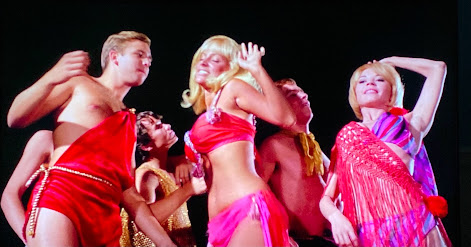 Village of the Giants arrives on Blu-ray from Kino Lorber with a beautiful transfer sourced from a 4K restoration by StudioCanal that accentuates bold colors and gorgeous visuals. Seriously, who ever thought a movie this goofy and locked in the mid-sixties would get the 4K restoration treatment? Things could only be better if the presentation was in true 4K instead of having that compressed down to 1080p for Blu-ray. Maybe one day. The disc includes a new audio commentary by Video Watchdog guru Tim Lucas. The theatrical trailer--which was in desperate need of restoration as well--is also included.

It's simply impossible to watch Village of the Giants and remain in a bad mood. It's the definition of feel-good cinema with fantastic pop music, beautiful twenty-something Hollywood youths in beach attire dancing The Watusi and The Jerk, and a goofy premise that rejects any ironic take and reminds us not to take ourselves so seriously. It's the epitome of escapist cinema and a must-see for fans of any teen-geared sub-genre from the era. Thanks to the new 4K restoration and Blu-ray, it looks like it was filmed yesterday.