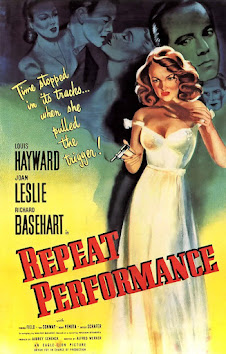 The "supernatural noir" is a rare breed. By nature, Film Noir tends to focus on humanity's fears and foibles, with the central characters either caught in circumstances beyond their control or trapped in a web of their own making. Supernatural occurrences seem to be at odds with the cold, criminal reality that exists in most of these films. That's one of the things that makes 1947's Repeat Performance such a wonderful anomaly. It's a hard movie to pin down, but it does indeed possess many of the hallmarks of noir while also including elements of romance, melodrama, and yes, the supernatural.

The film begins on New Year's Eve. It's almost midnight and the wind rages outside while the city celebrates. The camera approaches an apartment, zooming into the balcony as the double doors fly open and gunfire rings out. A body lies dead on the floor and the beautiful-but-stunned Joan Leslie holds the murder weapon. She throws on a coat and flees to a party in her building, confessing to her poet friend that she has killed her husband. How did it come to this? If only she could do things over again, things would be different, she opines. As the clock tolls what should be the arrival of 1947, something magical happens: it's once again the dawn of 1946. Joan Leslie has the chance to relive the previous year, using her knowledge of the future to hopefully change everything for the better. But noir fans know that fate sticks out a foot to trip you; can our sympathetic protagonist truly change anything with her repeat performance? 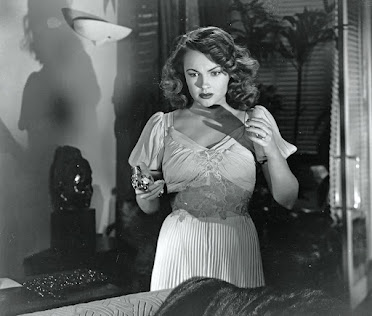 Joan Leslie is wonderful as Sheila Page, a broadway actress who has been given a second chance and doesn't want to waste it. The role is a showcase for the actress, affording her the opportunity to portray darker traits such as despondency, desperation, and dread, but also the other side of the coin with romance, joy, and optimism. As a teenager, Leslie had often been a romantic figure for the affections of men who were much older than her--Gary Cooper in Sergeant York, James Cagney in Yankee Doodle Dandy--but this film finds her all grown up and carrying a huge portion of the narrative on her shoulders. 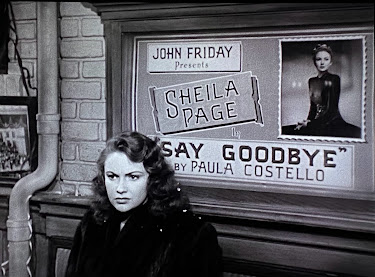 Sheila Page's husband Barney--who we first meet as the dead body on the floor--is played by Louis Hayward, who takes top billing. He's an out-of-work playwright who seeks solace at the bottom of a bottle. Once they were happy together and he looked at his wife with love and admiration, but now he's grown bitter and openly seeks the affections of other women. He finds those affections in the arms of a fellow playwright, played by Virginia Field, and they make no secret about their affair or the disdain they share for his wife. Richard Basehart, who would soon turn heads as the killer on Anthony Mann's He Walked By Night, makes his movie debut as William Williams, a poet and confidant of Sheila's who plays a crucial part in this tale of second chances. Val Lewton fans will recognize Tom Conway as an older benefactor and friend of the family. Finally, Gilligan's Island fans will enjoy seeing Natalie Schafer (Mrs. Howell) as a wealthy socialite. 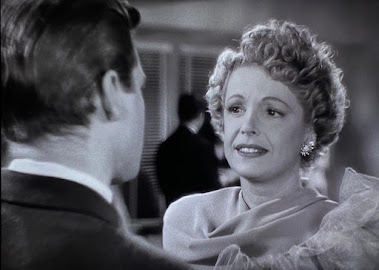 The film is gorgeously shot, wonderfully acted, and at 93 minutes, perfectly paced. With dark themes of inevitability and the cost of misdeeds, the film has more in common with The Twilight Zone than It's A Wonderful Life, though such comparisons are unavoidable. Repeat Performance would make a great double feature with Night Has a Thousand Eyes, another dark film with similar supernatural themes that questions whether destiny can be altered.

Now this "lost" movie has been rescued from obscurity thanks to a restoration campaign from the ULCA Film & Television Archive, the Packard Humanities Institute, and the Film Noir Foundation with a beautiful (and essential) Blu-ray distributed by the fine preservationists at Flicker Alley. In his introduction to the disc, noir historian Eddie Muller explains that he had first tried to secure a print of Repeat Performance years ago so he could show it at a festival and so that he himself could see it for the first time. It didn't take long for it to become apparent that the movie was in poor shape and was in dire need of saving. Thus began the years-long campaign to revive Repeat Performance for a new generation, and the result is the feature-laden disc that now sits beside me as I type this review. The new transfer is absolutely stunning and removes all the age and degradation between 1947 and now, providing a pristine window into the past. 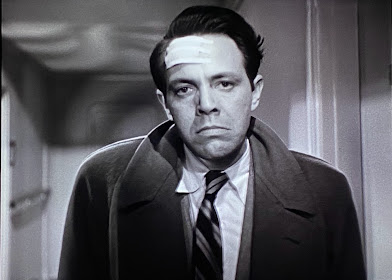 The bonus features are substantial. In addition to the Eddie Muller introduction (more on that in a moment), there's an informative profile of Joan Leslie by film historian Farran Smith Nehme that discusses everything from her early acting roles to her deep Catholicism and the challenges that it may have had on her career. Nora Fiore, aka "The Nitrate Diva," provides an informative commentary track. Eagle-Lion: A Noir-Stained Legacy is a 35-minute deep exploration of the Poverty Row by historian Alan K. Rode. Anyone who knows Mr. Rode's work knows what to expect here: an approachable but fact-filled tour through the past with fascinating anecdotes, first-hand recollections and discoveries, and scholarly detail. Frankly, Poverty Row studios haven't been given much academic attention until now--especially for genres outside of horror--and this documentary on the independent company that served up essential noir films from Anthony Mann and cinematographer John Alton is most welcome. A digital version of the film's pressbook is included on the disc as well. Rounding out the extras is a wonderful 24-page souvenir booklet that contains posters, lobby cards, and a lengthy "book to film" essay by Brian Light comparing the film to its source material, a 1942 novel by William O'Farrell. Finally, the package includes a reversible art wrap that offers the film's original poster on the flipside of Flicker Alley's new art. 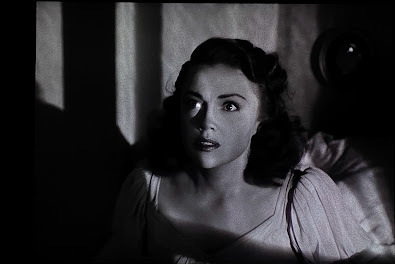 More on that introduction by Eddie Muller. Every noir fan, new or old, has likely witnessed or experienced first-hand some form of gatekeeping at some point in their cinematic journey. From my own perspective as a writer, reviewer, and YouTuber, there have been many times that I've covered a movie under the umbrella of film noir only to have someone (or multiple people) admonish me with the statement "that isn't noir." There are no hard definitions for film noir and it remains a style that's open to interpretation, but it can indeed feel like a private club for those seeking to explore the cinematic past. Using the tagline "return of the lost noir classic," Mr. Muller says that he realizes there will be those that disagree with one or more of those words. Is it a classic? Well, it has become quite obscure, so what does the word really mean? Is it noir? It certainly bears more than a few hallmarks of noir, but it also functions mostly as a melodrama. In the end, he says, it's up for the viewer to decide, to which I say "bravo!" We have enough people guarding the gates and protecting the borders; this Blu-ray gives us everything we need--the history of its actress, an essay on the literary roots of the tale, and even the story of the company that released the film--so that we can view the film with as much information as possible and draw our own conclusions. It welcomes us with open arms, as if to say "here you are, have fun!" And it is great fun.

I have tremendous gratitude for everyone involved in the restoration and new presentation of Repeat Performance. If the film wasn't a true classic before now, that's because it's been so rarely seen over the decades, but that's all changing. For fans of film noir, classic cinema, and the Golden Age of Hollywood, Flicker Alley's Blu-ray is essential. 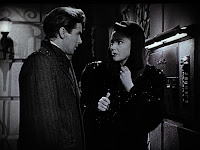