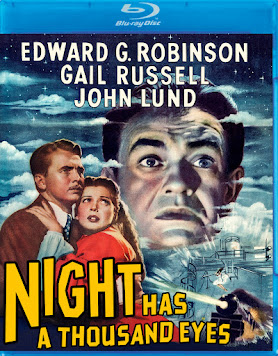 Night Has a Thousand Eyes is a fantastic 1948 supernatural film noir from Paramount that combines southern gothic atmosphere with the paranormal and the feeling of a tightening noose, which is something of a noir trademark. Edward G. Robinson stars as John Triton, aka "The Mental Wizard," a stage fortune teller who relies on parlor tricks and the aid of his associates to fool the audiences of his shows. When he starts to have real visions of the future, his newfound ability reveals tragic implications. Does he himself hold the power of life and death in his hands? And if so, can he escape this "gift" that he neither asked for nor wants?

It's difficult to talk about the film without referencing Stephen King's The Dead Zone, which seems to have been highly influenced by Night Has a Thousand Eyes. Though the basic characters are different, the story similarities are too numerous to name, and this film's origins as a novel written by Cornell Woolrich, a well-respected suspense author, seem to lend credence to its potential influence on Mr. King. Like The Dead Zone's Johnny Smith, John Triton can see glimpses and images, but full details are obscured. It's difficult for him to understand these flashes, or to read the context from his visions. If he shares information about someone's death with them, can they avoid their demise, or does his very involvement set the actions into motion that might never have occurred otherwise?

Edward G. Robinson is exceptional in this film. The plot calls for him to exhibit the toll of twenty years with his unwanted power, and we get to see the burden as it weighs upon him as he loses more and more of the people in his life. By the middle of the film, he's a shadow of his former self. The film also stars Gail Russell (a beautiful but tragic figure who died at 36 from alcoholism) as a character that Triton cares about deeply, John Lund as a skeptic whose disbelief is challenged by what he sees, and William Demarest as a police lieutenant determined to stop anyone else from dying and prove Triton is a fraud.

The real magic of Night Has a Thousand Eyes is in how it handles the third act. We're told how it's all going to end, and even given a list of visual references. Every character does their best to avoid the prediction and stop it from happening, but one by one, the dominoes fall. As with many noir films, themes of inevitability and predestination play a heavy role here, but the trick that this film has for us is in both playing to and subverting our expectations. I find it to be incredibly satisfying, deeply moving, and very powerful. The title of the film is woven into the story in the most haunting of ways. I think again of the famous quote from Edgar Ulmer's Detour: "whichever way you turn, fate sticks out a foot to trip you up." And yet, through the turn of events, Edward G. Robinson is allowed another layer to add to his performance, and the final lines of the movie echo and reverberate long after the movie has ended.

The film is directed by John Farrow, a screenwriter and director who won a best writing Oscar for Around the World in 80 Days (1956) and was nominated for his direction of 1941's Wake Island. Genre movie fans will also know him for helming Calcutta (also with Gail Russell, alongside Alan Ladd), Alias Nick Beal (Ray Milland and Audrey Totter), His Kind of Woman (Robert Mitchum and Jane Russell), and the 3D John Wayne film Hondo. Farrow was a solid Hollywood talent, and his films are worth seeking out.

The new Blu-ray from Kino Lorber offers a brand new 2K master, and even though some of the elements appear to have some wear, there's no doubt that this new Blu-ray provides the best home media presentation the film has ever recieved. The disc includes an audio commentary by film historian Imogen Sara Smith as well as trailers. For fans of film noir, Edward G. Robinson, and the paranormal, Night Has a Thousand Eyes is not to be missed.

The night has a thousand eyes and the day but one

the mind has a thousand eyes and the heart but one