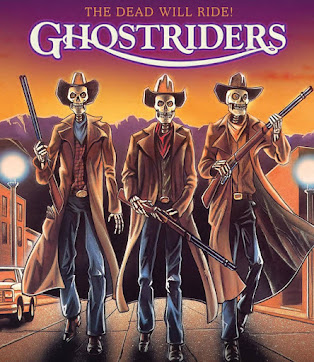 What is it about regional horror movies that we find so compelling? Maybe it's because they're made outside the traditional Hollywood scene and offer a fresh perspective on old ideas from people who are--more often than not--a lot like us. Local actors replace movie stars, new landscapes stand in for the Southern California scenery that we know so well, and there's a hunger and drive from everyone involved because these low-budget offerings represent that one shot to get noticed. If everything works out, then maybe, just maybe, the filmmakers might get to do it again.

Ghost Riders (also known as Ghostriders) is a 1987 micro-budget genre movie that is equal parts horror, action, and western; it's a real oddity among regional filmmaking, with westerns not being a profitable genre in the mid-eighties and the western/ghost story pairing being a particularly risky proposition. The film begins in the 1880s as a preacher spearheads the lynching of a ruthless outlaw and his gang of Lynyrd Skynyrd lookalikes. Before he hangs, the bearded bandit swears evil revenge on the man of the cloth. One hundred years later, the grandson of the preacher puts together clues that lead him to believe that the band of outlaws will return as ghosts to extract their vengeance. That's exactly what happens, and a small group of vigilant heroes must stand against the darkness that hell has unleashed. 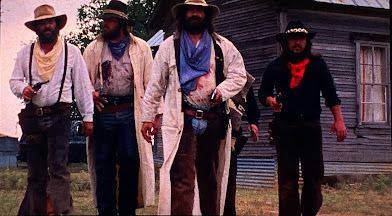 Ghost Riders was shot for $58,000 in Texas and directed by Alan Stewart, a film school graduate (Columbia College Hollywood) who had cut his teeth shooting local commercials and who makes a leap to full-length features with this film. As a director, he only made one more film after this (1989's Ghetto Blaster) before moving into a teaching position, which marks this piece of his brief filmography as all the more potent. Some of the crew (director of photography, screenwriters and producers, etc) were based in Hollywood, but many of the people associated with this film, including most of the cast, were Texas locals with little-to-no experience. Because of the rural southwestern location, Ghost Riders doesn't look like your traditional horror movie, and one has to imagine that the massive success of Tobe Hooper's The Texas Chain Saw Massacre loomed large in everyone's mind. 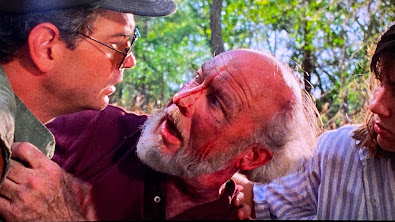 Pacing can be (and usually is) a problem with low budget movies since most of the resources are reserved for the bigger set pieces that often open and close these movies. Here again, this proves to be the case with Ghost Riders, which opens with an impressive flashback set in an old west town and ends with an all-out war against outlaw ghosts in the 1980s. Filling in running time between those high points proves to be a challenge, but the filmmakers do their best to use the first half of the movie to set the stage, build their characters, and establish the premise. As with many other regional and low-budget movies, a lot of time is spent walking around. Once the film reaches the half-way point, things really start to pick up and the conclusion is impressive, with slow-motion cinematography of a battle shot against the Texas dusk and even an explosion. 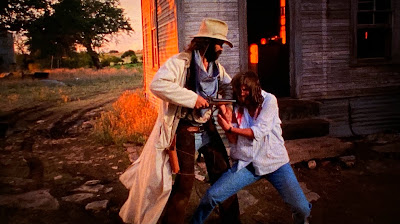 Ghost Riders is barely a horror movie, with more of an emphasis placed on action and gunplay. As it turns out, getting shot actually slows these ghosts down! Furthermore, most of the movie takes place in broad daylight, once again a limit imposed by the budget as night shoots require lights and power and offer a lot more challenge than day filming. Let's be honest: the premise is thin, the acting thinner, and the horror is virtually nonexistent. And yet, I enjoy this movie.

Why? Because there are two ways to approach micro-budget films such as this one: the first approach unfairly compares these movies to studio fare with much bigger budgets, career actors (or aspiring career actors), and proven directors backed by investors willing to risk millions of dollars. When watched alongside most of the horror films of the 1980s, Ghost Riders simply cannot compete. The other approach is to view the movie with awareness of what it is and to use the experience to learn and appreciate what it has to offer. Truly, Ghost Riders is a class in low budget filmmaking; it makes something out of almost nothing, and everyone involved made money. 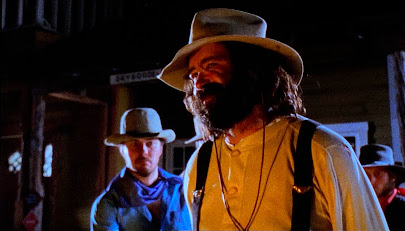 The new Blu-ray from MVD Visual is a veritable film school course in a single box thanks to extensive new special features with the director of photography, the co-writer, and producer, not to mention an archival documentary from the original creation of the film. I've already described the movie and its appeal, so now let's pop the hood and look at the engine.

Because director Alan Stewart had attended film school and learned a lot about the craft of filmmaking before he ever shot his first frame, he knew that you write a movie around things that you have access to, not what you don't. To paraphrase the director himself (who passed away in 2016), "if you have access to a spiral staircase, find a way to write that staircase into your film. If you don't have a spiral staircase, don't write it into your screenplay and then go looking for one, because you won't have the time or the money to do it." In short, lean on the resources that you have easy access to. In the case of Ghost Riders, they have the harsh, humid landscape of central Texas. They have 16 millimeter cameras because of the director's commercial work. Most importantly, they have access to a real western town, located within Texas Safari Ranch in the town of Clifton. Stewart had filmed a commercial for the attraction, which features exotic animals and lavish facilities for weddings and prestigious events. The huge western facade was the backdrop for an old west live show performed by actors for the crowds. During that commercial shoot, Stewart met these old west stunt performers and learned that they really wanted to be in a movie. The ranch even offered to let Stewart film on the location overnight for no cost whatsoever if he could provide his own power and equipment. So you've got access to western town, willing stunt actors who already have their own costumes, and 16mm cameras. What do you do? You make a horror/western/action movie. 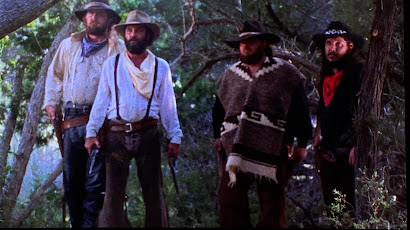 Remarkably, the filmmakers also had access to a biplane, which they incorporated into the movie as well, both with exterior aerial shots of the plane in flight as well as footage shot from within the cockpit, sending the production value through the roof. When the director of photography noticed that there were wolf spiders everywhere, he found a grasshopper and threw it into one of the webs and filmed the spider preying upon its meal. While it's a cool visual, it also serves as a metaphor for our characters, who are themselves hunted. To further keep the movie on budget and on time, three editing shifts were operating every day, meaning that the film was being cut together almost as soon as the stock left the camera. With all this diligent hard work and smart uses of resources, $58,000 looks like half-a-million or more. 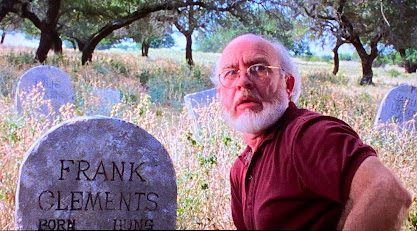 The Blu-ray for Ghost Riders is exceptional. MVD Visual has partnered with Verdugo Entertainment to bring collectors a must-have disc starting with the incredible video quality of the film itself. One of the producers mentions that the movie has been given a new 4K scan (no mention is made of this on the box itself) and it truly looks absolutely stellar. The 16mm footage has arguably never looked so good--Ghost Riders was distributed mostly to the VHS market in the 1980s, and for everyone who knows this movie in blurry 4:3 VHS quality, prepare to be blown away. The film is downright cinematic, with healthy grain and gorgeous color reproduction. 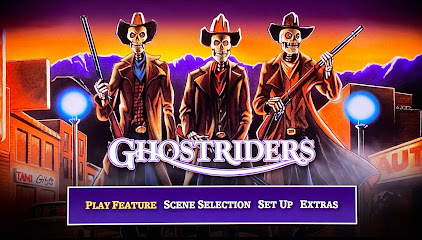 There are numerous special features, starting with a brand new commentary by director-of-photography/producer Thomas L. Calloway and writer/producer James Desmarais, moderated by Steve Latshaw. Nothing is off the table in the commentary track, from money talk to observations on the cast and crew, and even stories from the set. This candid discussion continues with a new original documentary called Bringing Out The Ghosts: The Making of Ghost Riders. There's also a new reissue trailer that hammers home the cult appeal and beautiful restoration quality:

Next up is an amazing vintage 1980s behind the scenes documentary called Low Budget Films: On the Set Ghostriders which was made for Baylor University and was taken from VHS sources. It's a total blast from the past, but is also filled with real substance and information on how low budget filmmaking works. The disc also includes movie stills and behind-the-scenes photo gallery, and the original theatrical trailer. 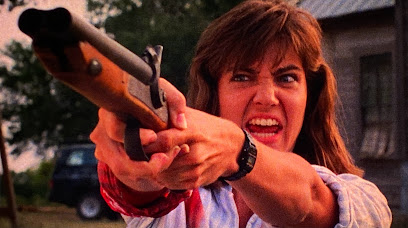 Too often, the conversation about movies (and everything else) leads to "best" or "worst" hyperbole. I see a lot of reviews for Ghost Riders that parrot this hyperbole, as if any movie could ever be perfect or should be dismissed as a total waste of time. Reality is much more complicated; this movie has obvious shortcomings that fans used to $200 million Hollywood spectacles may find insurmountable. However, taken for what it is--a $58,000 local Texas cult movie from a first time filmmaker--there's so much to enjoy, appreciate, and yes, even admire. Thanks to Verdugo Entertainment and MVD Visual, this movie looks better than ever and is accompanied by the complete story of its creation as well. Midnight Movie aficionados would do well to add this one to their shelf.