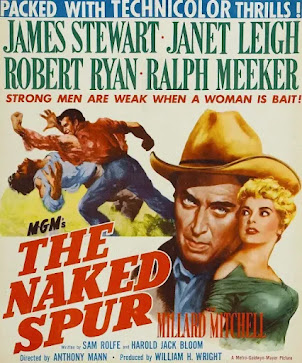 The Naked Spur is another cracking western teaming up director Anthony Mann with his frequent leading man Jimmy Stewart and serves yet another example of the storytelling economy of the classic Hollywood studio system. The film wastes nothing and everything on screen and in the dialogue in service of moving the plot forward and informing the characters, who we come to know and understand through their actions. 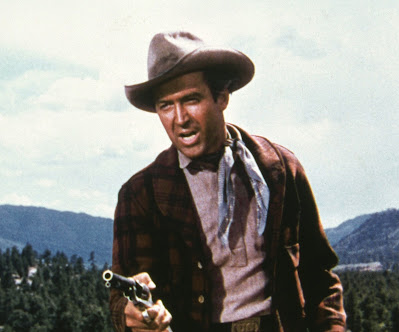 The film immediately introduces Stewart as a bounty hunter on the hunt for a murderer. He cautiously rides up on an elderly prospector (Millard Mitchell, Singin' in the Rain), thinking it may be his prey. Realizing he is not the target, Stewart is forced to explain his aggressive actions, and reluctantly agrees to pay the man to help him find his bounty. Now there are two. A few minutes later, a discharged Union soldier (Ralph Meeker, The Dirty Dozen) crosses their path and wants to know what they're doing. After an uncomfortable confrontation, Meeker follows the men, despite not being invited. Now there are three. Moments later, Stewart locates his fugitive (Robert Ryan, The Set-Up) and his companion (Janet Leigh, Psycho), who are both apprehended after a struggle. Now there are five. As the characters make their way back to civilization for Stewart to claim his reward, they are still strangers to each other and to us, the audience. Over the course of 91 minutes, The Naked Spur illuminates these complicated people and their motivations as they're forced to trust one another to survive both the elements and the pursuing Blackfoot Indians, who have reasons of their own for chasing them. 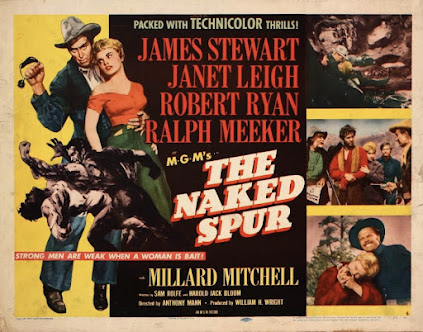 Anthony Mann would go on to some huge movies like El Cid (1961) and The Fall of the Roman Empire (1964), but it's the smaller, more character-driven movies that I admire the most. Coming off noir films like the stunning T-Men and Raw Deal, Mann brought something dirty, broken, and relatable to his stories, and his western films from the 1950s embody a lot of the post-War Noir stains that reflect a society struggling to come to terms with what it had seen and done. While books have been written about Mann, it feels like he's just starting to get his due among cinephiles, no doubt fueled by the amount of his work that has recently come to Blu-ray. It's not entirely accurate to call this MGM oater a "small" movie, since it's a Technicolor picture shot in Lone Pine, California and the scenic San Juan Mountains of Durango, Colorado on a budget of over 1 million dollars, but the intimate cast and focus on character makes it feel personal. Also, in contrast to his later work, this is indeed a tiny film (El Cid cost $7 million and The Fall of the Roman Empire a whopping $16 million). 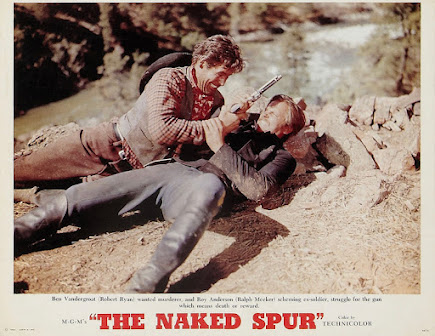 Stewart is outstanding as a broken man, driven by his need for revenge--not justice--and his goal of claiming the bounty reward represents a new start, far from the failures and pain of his past. I like Jimmy Stewart best when he's playing angry, bitter people who still end up wanting to do the right thing, and his character in The Naked Spur plays to his curmudgeonly strengths (for more in this vein, check out the largely-unsung1965 film Shenandoah from director Andrew V. McLaglen in which Stewart plays another hard and bitter man driven to action by his circumstances). In turn, Robert Ryan is the best kind of despicable as a bad guy that's fun to watch and slippery enough that we never know what he may do next. Janet Leigh is sympathetic is a young woman caught between two forces of nature and gets to be a bit more than the traditional damsel in distress here. 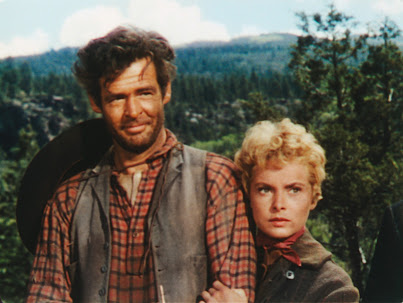 Warner Archive has released the film on Blu-ray with a top-notch transfer that captures all of its rich color and detail. The supplemental features include the 1953 theatrical short Things We Can Do Without, a comedic look at the downside of modern household conveniences from Pete Smith, as well as a Tex Avery cartoon (also from 1953), Little Johnny Jet. The theatrical trailer is also included.

Time has been kind to The Naked Spur as new audiences discover how special it really is. Screenwriters Sam Rolfe (co-creator of The Man from U.N.C.L.E.) and Harold Jack Bloom were nominated for an Oscar for their work on the picture, and it continues to find new audiences who love it for its deep character-based storytelling set against stunning vistas. In his movie guide, Leonard Maltin calls the film "one of the best westerns ever made." I'm inclined to agree.