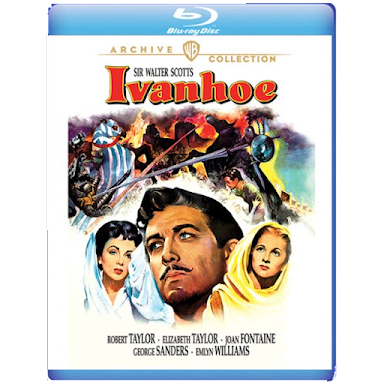 Hark, o reader, and attend the tale of the brave Ivanhoe, the crusader who challenged an imposter king and defended the Lionheart!

1952's Ivanhoe feels like a movie caught between two worlds; on one hand, it's a historical epic with lavish sets, A-list talent, and unrequited love. On the other, it's an old-school swashbuckler, filled with brutal action, sword fights, and chivalric games from the knights of the realm. After the success of Michael Curtiz's 1938 smash The Adventures of Robin Hood (still arguably the definitive interpretation of the timeless legend), Hollywood would repeatedly mine the myths of medieval England for silver-screen spectacles such as 1946's The Bandit of Sherwood Forest (one of my favorites), 1948's The Black Arrow, and a precursor to Ivanhoe, 1950's Rogues of Sherwood Forest. 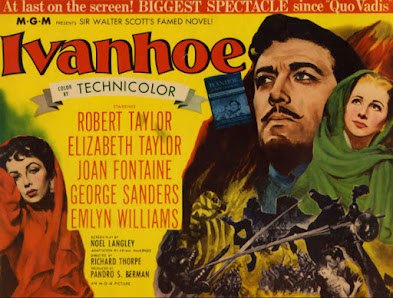 Based on the 19th century classic novel by Sir Walter Scott, Ivanhoe finds our titular hero (played by Robert Taylor, Quo Vadis) searching for King Richard the Lionheart, who has disappeared following a crusade campaign in the Middle East and is assumed dead. In his absence, the sniveling Prince John has assumed the crown and his oppression has descended across England. The first few minutes of the film reveal that Richard is indeed alive and being held for ransom, and Ivanhoe must gather a trusted group of allies to return the king to his rightful throne and end John's masquerade of power. Caught in the middle is a fair damsel named Rebecca (Cleopatra herself, Elizabeth Taylor), and an old flame (Joan Fontaine, Gunga Din). In this quest for justice and honor, there will be noble jousts, castle sieges, and even help from the legendary outlaw of Sherwood himself. 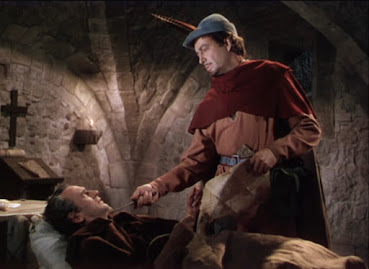 Robert Taylor is fine as Ivanhoe, if a little stiff and stoic, but he fills the tights adequately and rises to the physical challenges of the part, though he was in his early forties at the time of filming. This is one of those movies where the supporting cast overshadows the hero, and George Sanders (All About Eve) is a delight to watch as De Bois-Guilbert, essentially one of Prince John's henchmen who carries out his bidding. Some fans may know Sanders as the voice of Shere Khan the Tiger in Disney's The Jungle Book, and his trademark droll English line delivery lends him the air of aristocracy and arrogance that serves him well. The final confrontation between Ivanhoe and De Bois-Guilbert takes place on the tournament field and has some of the most brutal on-camera jousting and hand-to-hand combat committed to film up to that point. Even now, the real blows from the lances, maces, and axes pack a punch, giving the noble action a brutality that raises the realism of this chivalric fantasy. Horror fans should note that Prince John is played by Guy Rolfe, who would appear in numerous Charles Band productions in the 1980s and 1990s, including Dolls and four Puppet Master movies. This film also has another future actor from The Jungle Book in Sebastian Cabot (Family Affair, Ghost Story aka Circle of Fear), who would voice Bagheera the Panther in the Disney animated classic. 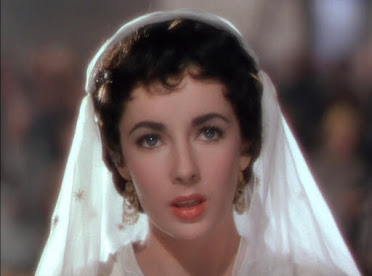 Ivanhoe was an ambitious production, filmed in Technicolor at MGM's British Studios in Hertfordshire, England and utilizing not one, not two, but FOUR actual castles in Italy. The budget soared to well over 3 million dollars, but most of that money seems to be on the screen. Audiences showed up for the film in droves, with the film grossing a whopping $10 million during it's theatrical run, setting a box office record during it's run at Radio City Music Hall and becoming the highest grossing MGM film of 1952, and one of the most profitable films in both the U.S. and the U.K. that year. So massive was its success that Ivanhoe garnered two unofficial sequels, both re-teaming star Robert Taylor with his Ivanhoe director, Richard Thorpe: 1953's Knights of the Round Table (another massive success), and 1955's The Adventures of Quentin Durward, which barely broke even and ended the Robert Taylor swashbuckler cycle. 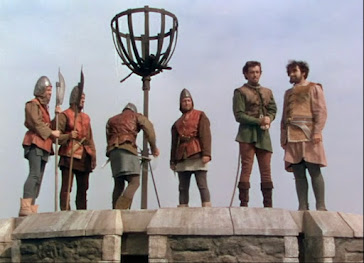 Ivanhoe arrives on Bu-ray from Warner Archive with the top-notch transfer that is the standard from the label. Supplemental features include the Oscar-winning 1952 Tom and Jerry cartoon The Two Mouseketeers, which appears to be presented in HD and looks great. The theatrical trailer is also included. 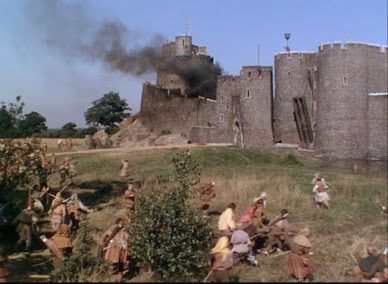 Ivanhoe represents big Hollywood production mixed with the classic romance themes of chivalry. For me, the film feels a bit long, even at only 106 minutes, but that might be because Robert Taylor seems a bit wooden and lacks the charisma of some of the other actors to pick up a sword: Errol Flynn, Burt Lancaster, Tyrone Power, Cornel Wilde, even Gene Kelly, who eventually traded his rapier for an umbrella. Still, the sets, the scenic locations, and the action are all top notch, and you couldn't ask for better bad guys than George Sanders and Guy Rolfe. No wonder this rousing adventure was nominated for three Oscars and became one of the biggest successes of 1952.