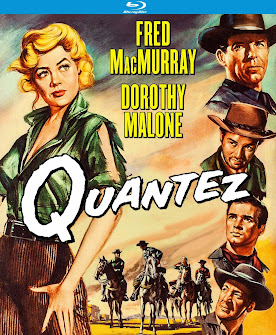 A remarkable western from an era filled with remarkable westerns, Quantez is like a fine meal that reveals itself over the course of 81 minutes. Deceptively simple in premise, the film opens with a gang of robbers fleeing across the desert and headed for Mexico. We do not see the robbery, only the aftermath as our characters seek a refuge where their exhausted horses can recover and the riders can regroup. This haven presents itself in the form of a town called Quantez, but all is not well, and the settlement is completely abandoned. What threat lies in Quantez? For that matter, what threat lies within the group themselves?
I wouldn't be surprised if Quentin Tarantino is a fan of this film, as his own Reservoir Dogs feels very similar in tone, structure, and character. Like Reservoir Dogs, Quantez is a film populated by characters with their own motivations and goals, and as the story unfolds over the course of one night, the group begins to disintegrate from within. Also like Reservoir Dogs, we don't see the robbery itself, only the greed and backstabbing that follows. Finally, just as in Tarantino's film, at least one character harbors a secret that no one else knows...not even the audience, until the time is right.
Quantez is a study in economy. A cast of just a handful of people, shot predominantly on a single set, and a premise that relies on acting and character development rather than action (though that's here too, especially in the third act), not to mention a screenplay that wastes absolutely nothing. Pay attention to conversations and details early in the film: they may seem like throwaways, but they're not. And keep an eye on the performances, too: Fred MacMurray plays the old gunslinger who is nearing the end of his ride with dignity, brooding menace, and silent authority. For those that enjoy the range of the actor (noir, westerns, even Disney comedies and sitcom dads), it's a showcase in restraint.
The 1950s are held above all other decades as the heyday of the American western because of their gray morality, striking cinematography, and complex characters. Quantez may not be one of the most recognizable names when discussing films of this genre, but perhaps it should be.
Dorothy Malone Fred MacMurray Quantez western