Robert Altman's 1973 Neo Noir film The Long Goodbye is hard to pin down. It's a detective movie that takes place 15 years after the classic film noir cycle had ended, depicting a character out of time, sleepwalking through a world that is not his own. The plot is opaque, and there are details to the story that aren't made known to the audience, even when the final credits have rolled. It's both a commentary on the Golden Age of Hollywood and a criticism of artifice. Is anything real?

Elliott Gould (2001's Ocean's Eleven) stars as Philip Marlowe, a private detective first created on the page by hardboiled author Raymond Chandler and embodied in film and television by Humphrey Bogart (The Big Sleep), Dick Powell (Murder, My Sweet), Robert Montgomery (Lady in the Lake), Robert Mitchum (Farewell My Lovely), James Garner, and Powers Booth (TV's Marlowe and Philip Marlowe: Private Eye, respectively). In the capable hands of Gould, Marlowe goes from confident tough guy to a sleepy outsider, bewildered and bemused. The character wears a suit and tie (no hat) and has a cigarette in his mouth for almost every scene of the movie. He mumbles his lines. He lives comfortably in squalor, uninterested in money or the topless women that live in the apartment across from his. He is but a passenger, a man who believes in friendship and loyalty, but little else. This is arguably Gould's greatest performance. 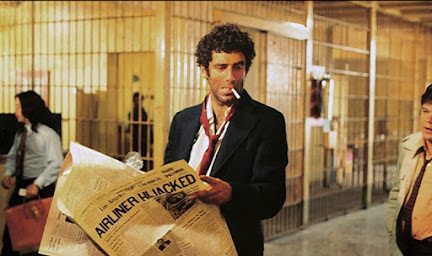 Altman and Gould, who first worked together on 1970's M*A*S*H, crafted their anti-hero to be a "Rip Van Marlowe," operating as if the character had slept for 20 years and woken up in the bizarre, pot-smoke haze world of 1973, populated by hippies, yoga nuts, and the crumbling, artificial world of a Hollywood whose best days were long gone. Fittingly, our first shot of Marlowe in the film is him waking up, and the character seems to be drowsy and lethargic for most of the film. This is not his world. His values don't belong here. Whatever happens is none of his concern. "It's okay with me."

The story is adapted from Chandler's novel by screenwriter Leigh Brackett, whose history with Marlowe dated back to 1946 when she contributed to the screenplay of The Big Sleep. Altman and Gould had no intention of creating a traditional film noir, and tweaked the script, making numerous changes that altered the character and brought him in direct conflict with the compromises of the modern world. When asked about her approval of these changes, Brackett told Gould that she was "more than okay" with them. As for the controversial ending, which is a complete reversal from the original book's finale (which I won't spoil here), Altman loved it so much that he credits that ending with bringing him on board the project, and only agreed to direct the film if he had written consent that the studio would not take the film away from him and change it.

The Long Goodbye is a befuddling film, which was an intentional decision and something that characterizes a lot of Altman's work. The players in his stories stumble, searching for answers that may or may not exist. As mentioned, this is a mystery movie (a whodunnit of a sort) in which we never find out all the particulars of the solution. In that respect, we're as in the dark as Marlowe, and Altman isn't interested in explaining everything. That's one of the things that can serve as a frustrating barrier for more traditional movie enthusiasts, since Altman is more interested in immersion in the character and in allowing the actors to discover their own truth than in spooling out the plot like breadcrumbs for viewers to easily follow. This is a noir film that takes place in the bright, blown-out sunshine of Hollywood (achieved by "flashing" the film to mimic the look of a vintage postcard) and is disinterested in meeting expectations. Altman, who came to film in his forties, always seemed to be out of step with the commercial side of cinema, and even his own commercial endeavors, like 1980's Popeye, seem at odds with traditional success.

Case in point: when the original painted promotional artwork for The Long Goodbye featured traditional images of beauty in its depictions of Gould and his co-stars, Altman and his team concluded that it was inaccurately presenting the movie as something it was not. They hired Mad Magazine artist Jack Davis to craft a poster of a different kind, with caricatured representations of the cast, complete with word bubbles coming out over their head. The movie was marketed as a light-hearted farcical comedy rather than a minimalistic Neo Noir. Odd choice, but one that is now celebrated because it's so unique. 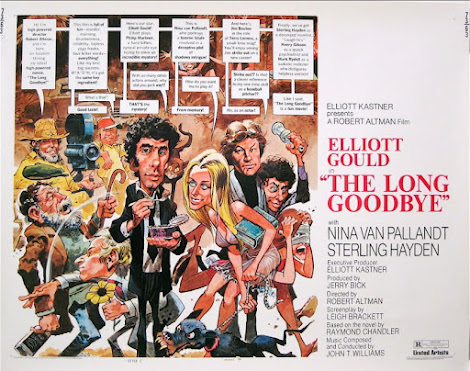 I'd be remiss not to mention the stellar supporting cast here, which owes to unconventional casting: singer and famous mistress Nina van Pallandt (The Sword and the Sorcerer), makes her feature film debut here as the wife of Sterling Hayden (The Asphalt Jungle, The Godfather), who is doing his best Ernest Hemingway impression. Mark Rydell (On Golden Pond) plays a tough local hood, Henry Gibson (Laugh In, The Burbs) is a crooked psychiatrist, and watch for an uncredited Arnold Schwarzenegger as a massive leg breaker.

Much has been said about the music for the film, which features a single song, repeated throughout in various renditions and deliveries, ranging from the radio, a piano player at a bar, and maybe my favorite, the sound of a doorbell. The title tune was written by two men, one who was already a legend, and one who would become one. Johnny Mercer had written the lyrics to the hit song "Hooray for Hollywood" (which this film uses ironically), way back in 1937 for the movie Hollywood Hotel, and his musical contributions have been featured in over 900 films. Composer John Williams was a star on the rise, with his biggest successes (Jaws, Star Wars, Superman, Raiders of the Lost Ark, Harry Potter) still ahead of him. The song is fantastic, and fits the hard-to-define pastiche/satire/drama tone of this film perfectly.

First issued on Blu-ray by Kino Lorber in 2014, a new 2021 re-release is sourced from a brand new 4K master and looks absolutely fantastic, presenting the blown out scenery with all the film grain and nuance that Altman and his cinematographer Vilmos Zsigmond intended. The Blu-ray includes a new audio commentary by Tim Lucas and a heavy compliment of special features, some of which date back to the 2002 MGM DVD release of the film. "Rip Van Marlowe," featuring Robert Altman and Elliott Gould, discusses the sleeping detective waking up in a new world. "Vilmos Zsigmond Flashes The Long Goodbye" covers the unique visual style crafted by the cinematographer. "David Thompson on Robert Altman" chronicles Altman in Hollywood and the road to The Long Goodbye. "Tom Williams on Raymond Chandler" is a look at the crime writer. "Maxim Jakubowski on Hard Boiled Fiction" discusses the unique detective fiction that serves as the foundation for this story. "American Cinematographer 1973 Article with Animation" and "Trailers from Hell with Josh Olson" round out the package, which also includes radio and television spots as well as the theatrical trailers. A reversible art wrap and limited O-card slipcase are also included. The only thing that could improve this package is if we got to see it in native 4K instead of having the 4K master scaled down for Blu-ray.

I could go on and on about this film. What does the cat at the beginning mean? Altman notes that the movie is about lies, among other things, and Elliot Gould lies to the cat so the cat leaves, but then why do we get so many scenes of dogs after the cat departs? What are we supposed to take from the ending? Has Gould awakened from his slumber, or is the final act a statement on inevitability and compromise, a final dream before we say our farewells? Answers don't come easily--or at all--in Altman's films, as they often simply leave it to us to determine what we want to take from them. In that sense, The Long Goodbye is the best kind of movie: one that rewards repeated viewings and multiple interpretations, and doesn't really seem to care one way or the other whether we like it or not. A film of its time, and yet ahead of its time. Highly recommended.