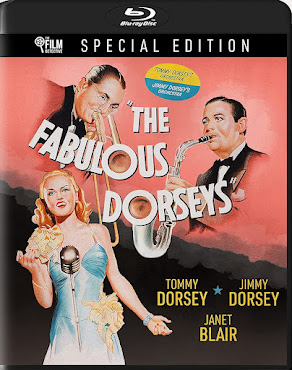 Hailing from the glory days of the "Big Band Musical," The Fabulous Dorseys recounts the meteoric rise of Tommy and Jimmy Dorsey, two brothers who soared to the heights of stardom together, then publicly split, only to achieve even higher fame individually. Modern audiences might be surprised to learn that The Dorseys sold something in the neighborhood of 110 million albums, making them household names and some of the most successful musicians not just in their era, but also of the last 100 years. Comparisons to Taylor Swift are not unfounded. EVERYONE knew The Dorseys, and their music and off-stage exploits were common knowledge.

The real story of The Dorseys is tailor-made for the movies, and only needed to be slightly fictionalized to smooth some of the rough edges. Tommy and Jimmy grew up in a small town, learned their instruments as children and quickly rebelled against the traditional constraints of "proper music," leaning into jazz and dance beats with a distinct style and rhythm that got audiences on their feet. In the mid-thirties, they had a public falling out on stage over a creative disagreement. The bad blood seems to have culminated in a fist fight on the rooftop of New York's Astor Hotel in 1942 as their feud had become common knowledge and was being reported on in the papers and tabloids of the day. The Dorseys were The original Gallagher brothers, decades before Oasis: two brothers, both talented in their own rite, who simply could not get along with each other, and everyone knew it. 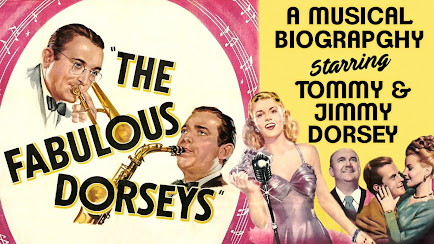 All of this makes it remarkable that Tommy and Jimmy Dorsey star as themselves in The Fabulous Dorseys, sometimes known as The Fighting Dorseys. Putting aside all differences long enough to co-star in their own biopic, both musicians get to shine as their music is featured front and center. Neither brother was an actor, and both appear a bit wooden in their line deliveries, but this film was as close as many audiences would get to The Dorseys, bringing all the close-up concert action to their local cinema screen.

As a film, The Fabulous Dorseys is a bit dry, but the music goes a long way to picking up the slack. Big Band music has power, and something happens when the orchestra finds that beat and everyone lands on the same page. It's transcendent, and the film does capture this, bringing hits like "I'm Getting Sentimental Over You" and "Tangerine" to life right in front of us. There are also lots of cameos and guest performances from other popular musicians of the time, such as Art Tatum, Charlie Barnet, Bob Eberly, and many more.

The Fabulous Dorseys was a modest picture from Charles R. Rogers Productions, an indie company that got the film distributed by United Artists. When the copyright slipped through the cracks, the film ended up in the public domain, leading to years of substandard home video editions that feature blurry, second and third generation sources. Thankfully, the fine folks at The Film Detective have given the movie a brand new 4K restoration from archival film elements. The print used for the new scan does have some scratches and damage, but it looks light years better than anything else. Decades have been taken off of this movie, bringing it once again to its former glory.

The Film Detective has also provided a healthy compliment of special features, including a commentary by author Jennifer Churchill, and a new Ballyhoo Motion Pictures documentary feature, The Fabulous Forties: Big Bands on Screen, featuring C. Courtney Joyner detailing the history of the Big Band Musical and arguing that it represents its own subgenre. Finally, an enclosed booklet features The Dorseys in Film, a ten-page essay by Don Stradley which recounts the Dorseys and their massive successes both in film and television. There's a direct connection between Tommy and Jimmy Dorsey and Frank Sinatra, Elvis Presley, and even Woody Allen.

The Fabulous Dorseys is a much-welcomed re-evaluation of a movie that has all-too-often been dismissed because of its subpar video and audio quality. Two of the biggest stars of the Big Band era (and beyond) get to once again shine as brightly as they did for audiences almost 75 years ago.