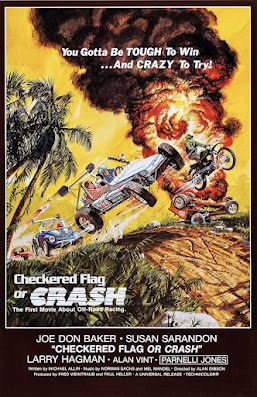 The poster AND trailer for Checkered Flag or Crash proudly announces it as "The First Movie About Off-Road Racing!" Hailing from the glory days of the seventies redneck revolution that catapulted CB and trucksploitation movies like Smokey and the Bandit, White Line Fever, High-Ballin', and The Great Smokey Roadblock onto screens and into the hearts of millions of gasoline-thirsty road dogs, Checkered Flag or Crash serves up 95 minutes of high speed thrills and a veritable demolition derby of destruction.

Cutting through the layers of exhaust fumes and mud splatter reveals a pretty thin concept, made more interesting by the cast and some of the crew behind the scenes. The premise of the film finds a down-on-his-luck promoter (played by Larry Hagman from I Dream of Jeannie and Dallas) putting together a massive race in The Philippines--The Manilla 1000: a one-thousand mile off-road competition that will see motorcycles, dune buggies, and off-road vehicles of all shapes and sizes speeding for that checkered flag. Along the way, they'll encounter arid deserts, mountains, floods, and hazards of every variety. These drivers are risking life and limb for the prize money, and not everyone will survive to cross the finish line.

In the lead is Joe Don Baker, who was enjoying a brief foray into top-bill lead actor roles thanks to the success of 1973's Walking Tall. This streak continued into Golden Needles and a spate of racing films that include Checkered Flag or Crash, but had pretty much evaporated by the time of the one-two punch of Greydon Clark's Wacko and Joysticks a few years later. Baker plays "Walkaway" Madden, a hotheaded, lead-footed driver who has narrowly missed victory and is singularly focused on his goal.

Susan Sarandon, two years after The Rocky Horror Picture Show, co-stars as C.C. Wainright, a journalist who is covering the race as a reporter and ends up riding shotgun across the treacherous terrain next to Baker. Truthfully, the two have zero chemistry together, which the movie seems to understand and doesn't force the opposites-attract angle on us. Sarandon often looks bored, but that can be said of every cast member involved here. Checkered Flag or Crash was shot on location in the stifling heat and humidity of The Philippines, and nobody seems to want to actually be there. The cast also includes Alan Vint (The Panic in Needle Park) and real racing icon Parnelli Jones as himself.

Handling the screenwriting duties is Michael Allin, who had achieved notoriety with his first screenplay, the Bruce Lee vehicle Enter the Dragon, in 1973 and the exceptional Blaxploitation film Truck Turner a year later. Handling the directorial duties is Canadian-born Alan Gibson, a television director whose biggest claim to fame among genre movie fans is his directing two seventies Hammer films, Dracula A.D. 1972 and The Satanic Rites of Dracula.

Checkered Flag or Crash never transcends its drive-in movie origins, and that's perfectly fine. With lush Filipino scenery and loads of practical car stunts, motorcycle leaps, and real destruction, it serves up exactly what it promises and nothing more. Another reason to appreciate this movie is the theme song, which recounts the plot (thin though it may be) and the title of the movie itself. Sung by Harlan Sanders--who may or may not be a real person, possibly a clever reference to the KFC magnate Col. Harland Sanders--the country tune was written by Norman Sachs and Mel Mandel and sounds just like a poor man's Waylon Jennings. I LOVE IT.

The movie has been given a new 2K restoration from what appears to be a 35mm print, meaning dirt and damage to the image pops up from time to time, as do the "cigarette burns" in the corner of the frame that signal the projectionist to change the reels. For fans of the movie, or for enthusiasts of seventies tough guy movies in general, the new Blu-ray from Code Red is an absolute revelation. No special features are included other than trailers for this film and other Code Red titles, including The Naked Ape, Almost Summer, AIP's robot dog comedy C.H.O.M.P.S., The Great Smokey Roadblock, and Story of a Woman. Checkered Flag or Crash is the equivalent of a monster truck rally: it's loud, a bit monotonous, and certainly not much in the story department, but it doesn't aspire to be anything other than what it is. Those with a soft spot for the drive-in cinema of the late seventies will find this to be 95 minutes well spent.