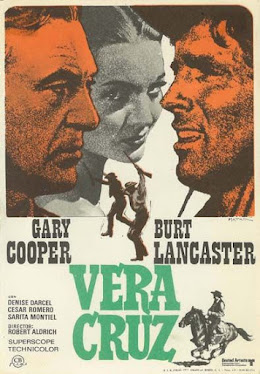 VERA CRUZ is an outstanding 1954 western directed by Robert Aldrich (THE DIRTY DOZEN) that shares many plot points and devices with Sam Peckinpah's THE WILD BUNCH, which wouldn't arrive on the scene for a full fifteen years. You want Charles Bronson playing harmonica over a decade before Leone's ONCE UPON A TIME IN THE WEST? Here it is, alongside Jack Elam, another Leone pick. You want Ernest Borgnine as part of a band of outlaws looking for trouble? Here he is. The influence of Vera Cruz upon the next generation of filmmakers cannot be underestimated.
At the core of Vera Cruz is the relationship between our two lead characters. Gary Cooper plays an honorable man who was on the wrong side of the Civil War and now drifts, looking for mercenary work. Burt Lancaster plays a scoundrel with few redeeming qualities, a literal black hat who is quick on the draw and seems to have no moral code whatsoever. The two men find their fates intertwined when they agree to accompany a countess to the Mexican town of Vera Cruz. When they discover that the stagecoach the countess rides in contains millions in gold, they scheme how to relieve those who have hired them of the treasure.
Vera Cruz is remarkable, and well worth seeking out. As previously mentioned, comparisons to The Wild Bunch are inevitable, as Peckinpah's movie seems to be drawing so heavily on plot points, character arcs, and even the end battle in a way that cannot simply be coincidence.  Vera Cruz is far more violent than your typical fifties western, with bullets in skulls, a spear in someone's throat, and an attempted rape scene that was pushing boundaries for the era.
The real draw here is the acting by Gary Cooper and Burt Lancaster. I often find Gary Cooper to be wooden and stiff. He typically delivers the kind of performance that some call "Lincoln-esque" which means that he's erect and noble, but also fairly stoic and expressionless. This is NOT the case in Vera Cruz, as he seems to really be enjoying himself. When the role calls for emotion, he's there. Grief, pain, betrayal, Cooper really conveys the deeper feelings of his character, and even seems to be having fun in the movie's lighter and more adventurous moments.
Similarly, Vera Cruz finds Burt Lancaster in rare form. He's completely untethered, chewing scenery, snarling and sneering as he delivers the fantastic dialogue from the typewriter of screenwriters Roland Kibbee and James R. Webb. Consider this line: "Ace used to say you don't take any chances you don't have to. Don't trust nobody you don't have to trust, and don't do no favors you don't have to do. Ace lived long enough to know he was right. He lived thirty seconds after I shot 'em." It's the kind of role one has to imagine every actor hopes they get to play at least once: an irredeemable man of violence that is somehow so well-written that the audience roots for them anyway.
There's so much to praise in Vera Cruz. The cinematography from Ernest Laszlo (Logan's Run, It's a Mad, Mad, Mad, Mad World) is top notch, and real Mexican locations such as the Pyramid of the Sun and historic parts of Mexico City play an important visual role in rooting us in a place beyond the typical landscapes of Hollywood westerns. This isn't Monument Valley, or even Vasquez Rocks, it's distinctly south of the border.
The 2021 Kino Lorber Blu-ray release of Vera Cruz touts a new 2K scan (though this is not mentioned on the package itself), a new audio commentary from filmmaker Alex Cox, Trailers from Hell with John Landis (who points out the similarities to The Wild Bunch and admits to scenes he copied for his own western, The Three Amigos), and a theatrical trailer.
The 1950s was the golden age for the western. The complexity of storytelling reached a pinnacle in the years following WWII as soldiers wrestled with the serious questions about what combat had turned them into. The westerns of the fifties embody peak cinematic value and thought-provoking scripts. This film is a shining example of what films of the era were capable of, depicting two men, both on the fringes, united in their quest and yet hurling toward an inevitable confrontation. Those looking for some of the best examples of mid-century westerns can add Vera Cruz to their short list.
1954 Burt Lancaster Ernest Laszlo Gary Cooper John Landis Kino Lorber Mexico review Robert Aldrich Studio Classics Vera Cruz western