Review: This is the Night (1932) - Cary Grant's Debut and The Glimpse of a Darker Hollywood 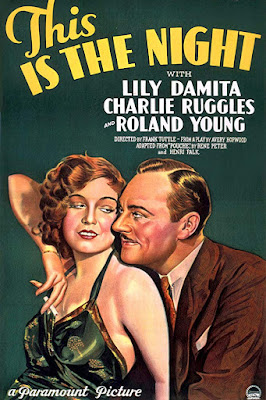 1932's This is the Night comes from the short--but wonderful--pre-code era of cinema. More specifically, it was made before the days when the Hays Code (aka the Motion Pictures Production Code, which guaranteed the decency and moral value of each and every Hollywood production) was being firmly enforced. Those that consider movies of the thirties and forties to be gentrified might be surprised at just how bold and risque some of the films from the early days of cinema actually were, and sometimes still are. 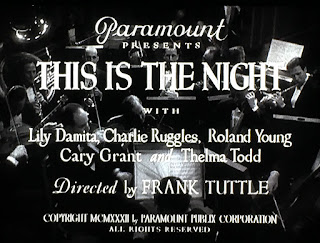 Such is the case with This is the Night, a cheeky comedy about a woman (Thelma Todd, from the Marx Brothers classics Horse Feathers and Monkey Business) who is having an affair with a well-to-do gentleman, played by Roland Young (Topper, King Solomon's Mines). They're planning a Venice getaway, but when Todd's husband, an Olympic javelin thrower (played by Cary Grant in his feature film debut!) arrives home unexpectedly from the summer games, his wife and her lover quickly concoct a cover story involving a non-existent wife for Young's character in an attempt to keep them out of hot water with the athlete. 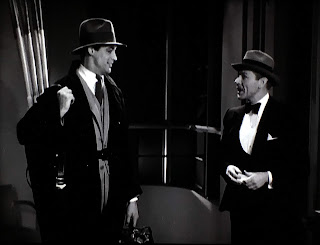 Busted in the act and with their backs against the wall, the secret lovebirds find their cover story is put to the test when Grant (who plays the whole thing with a knowing smirk) suggests they all follow through on the Venice vacation in hopes that he can meet this wife that Roland Young has spoken so highly of. Couples trip! Young seeks the help of a professional actress played by Lili Damita (more on her in a moment) to pose as his wife for the trip, which he hopes will trick his foe and allow him to continue his dalliances with the married man's wife. It's worth mentioning that this movie is a comedy, and this premise leads to one situation after another in which our sneaky adulterers are almost found out in the most amusing of ways. 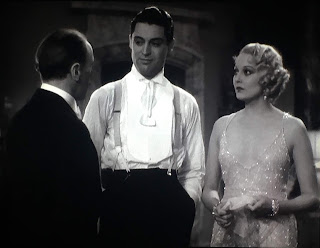 The movie itself is slight, but pleasant. There's nothing particularly classic or sweeping here (early Hollywood productions are often akin to stage plays, bound by sets and only occasionally lingering on location), but it's always a joy to visit these studio classics (this is a Paramount film) that literally built Hollywood. They're glamorous, well-acted, and I'm of the opinion that the talent that existed during the Golden Age of Hollywood puts all others to shame. These classics possess the spirit of a time gone by that we will never recapture, and these old classics allow us to visit an era that has long disappeared, if it ever really existed in the first place. It's also fun, and a bit surprising, to be reminded of how permissive the older films can be, as This is the Night features numerous shots of our lead actresses in various states of undress. In fact, the movie builds a running gag in which Thelma Todd keeps having her clothes ripped off of her. Also, consider this line, when Young discovers Cary Grant alone with Lili Damita as she's changing outfits: "Another javelin lesson, I suppose?" Oh, behave! 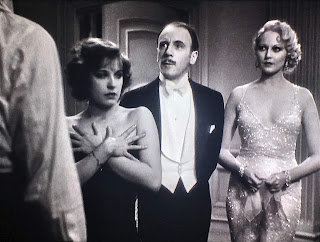 What holds much more appeal than the film itself, in my opinion, is the who, what, and why that exists BEHIND the movie. Let's start with the fact that this is Cary Grant's first movie. He's astonishingly-young in the film, still in his twenties. Since we know where he's going, it's a treat to see him here so fresh-faced and new. Then there's Thelma Todd, a real beauty with moxie, who would be found dead a few short years after this movie at the age of just 29. The death was ruled a suicide, as she was discovered in her car, parked in her garage, with carbon monoxide poisoning ruled as the official cause of death. What makes the story more interesting is the fact that she and her husband had started a successful restaurant/bar that catered to the Hollywood crowd. Local gangsters--allegedly--had been shaking her down to sell the business to them. When she refused, she turned up dead shortly thereafter. Coincidence, or cover up? That's a movie-worthy plot, but we're talking about reality. 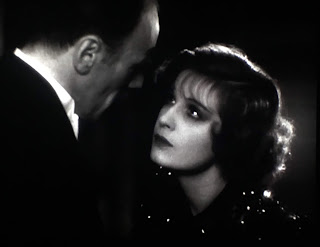 For me, the real star of the movie is Lili Damita, billed here as Lily Damita. The French-American actress had started out during the silent era in the early twenties and had become quite a name over the span of a decade. Unfortunately, by the time of This is the Night and the arrival of sound at the movies, her career was coming to a close. Still, there's something very pure, noble, and sweet about Damita. She's not glamorous in the same way that Thelma Todd is here, but there's something else...a smoky sultriness, an inherent vulnerability that might today be recognized in someone like Natalie Portman or Liv Tyler. In the twenties, Damita had reportedly (this is still disputed) been married to the famed director Michael Curtiz, the man who would helm The Adventures of Robin Hood, Angels with Dirty Faces, and a little movie called Casablanca. But it was her marriage to Errol Flynn (Robin Hood himself!) from 1935 to 1942 that has become the subject of the most gossip, especially considering Flynn's hedonism. The name of his autobiography, after all, is My Wicked, Wicked Ways. 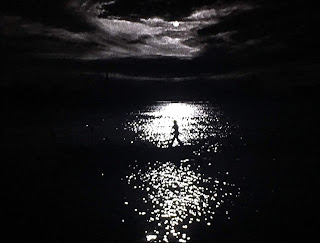 There's something deeply attractive about the classic era of Hollywood. The lives, the conspiracies, the rumors, the murders, the mysteries..there's a darkness behind the scenes that is occasionally glimpsed in the movies themselves, though covered with gloss and sheen. This is the Night offers a peek at a more free-spirited, indulgent movie star lifestyle that is both attractive and repellent at the same time. I'm not sure that these deep catalog titles from the early days of Hollywood are for everybody, but they offer me a portal to an otherworldly place inhabited by the gods, accompanied by all the soap opera drama of myth. By exploring these increasingly-obscure corners of cinema history, maybe they will offer the same to you.

This is the Night is included in the 2016 DVD set Cary Grant: The Vault Collection.