August 06, 2019
Joshua Jabcuga Has Some Cool Recs to Guide You Through the Dog Days of Summer! 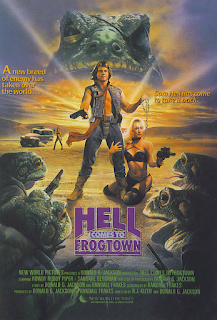 Sure, you’ve seen “Rowdy” Roddy Piper in John Carpenter’s They Live, but are you familiar with this 80s oddity? Frogtown is certainly a product of its time and yet, if you’ve had the pleasure of watching this movie (or if you’ve read the film’s synopsis), you’re likely asking yourself, what time was that exactly? When it comes to the Hot Rod, I don’t have to remind you that just when you thought you knew the answers, he changed the questions. So turn off your brain and enjoy this ultimate throwback to the days of your local Mom & Pop video store deep dive discoveries. Preorder directly from www.VinegarSyndrome.com if you need to have the slipcover edition (a “V-shaped splitcover” limited to 3,000 units). Personally, I’m fairly indifferent about slipcovers; I’m more concerned with what’s in the box than the actual packaging—however, nobody rocks slipcovers like the fine folks over at VS. The VS slipcovers are quite elegant in design, and worth going out of the way for. This edition is getting a 4K scan restoration upgrade, so the film will likely never look better, and includes a director commentary plus video interviews. 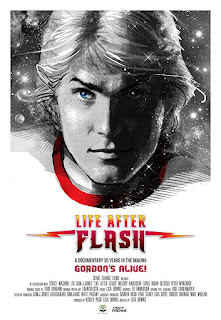 Described as “…a feature documentary that explores the life of Sam J. Jones since his iconic performance as ‘Flash Gordon’ in the 1980 classic of the same name,” this recently began streaming in the U.S. on Amazon Prime. Notable for the inclusion of many of the key players like Jones, Melody Anderson, Brian Blessed, Topol, and even Queen’s Brian May (sorry, Timothy Dalton fans, you’re out of luck here), the doc works best when it sticks to its goal of chronicling the (near) rise and fall and eventual redemption of Jones. It also works well as a supplemental “making of” to the camp classic. There are times when it felt like Life After Flash was at odds with itself, and wasn’t entirely sure which story it wanted to focus on. The behind-the-scenes anecdotes regarding Flash Gordon’s production, while insightful and critical to the context of the overarching premise, felt more like an unsteady walk down memory lane, peppered with superficial talking head sound bites gathered on the fly from various comic conventions (to beef up the film’s trailer and subsequent sales, no doubt). Life After Flash is by no means a complete misfire. While I wished the editing was a bit more cohesive and the filmmakers had dug just a little deeper, this one will likely have you digging out your copy of Flash Gordon for a re-watch.

Cemetery Dance – The Magazine of Horror and Suspense (#77) 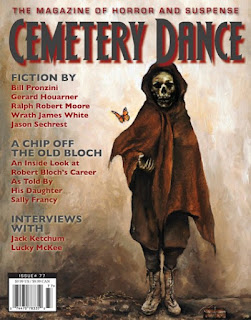 Magazines are a dying business. Newsstand mainstays like Mad recently announced it’d be shuttering the doors on the madhouse, and both Entertainment Weekly and Rolling Stone have decreased their publishing schedules. For that matter, do “newsstands” even exist anymore? Cemetery Dance is a boutique book publisher for horror genre collectors, most notable for their higher end, limited releases of Stephen King titles. They also produce their own magazine, which was at one time very influential and published with much more frequency. These days, when a new issue of Cemetery Dance mag drops, genre readers and enthusiasts count their blessings, because it means they get one more tango in the pale of the moonlight. The mag has felt like it’s been on life support for the past few years now. That’s just the reality of the market, and also an indication that Cemetery Dance (the publisher) would rather focus their concerted efforts on their book line, which is their bread and butter. Regardless, issue #77 makes up for lost time and is a worthy addition to your home magazine rack. This issue features a candid, career-spanning interview with novelist Jack Ketchum (especially poignant as it’s most likely the last interview he gave before his death). Also of note is an interview with Sally Francy, who is the daughter of pulp fiction master Robert Bloch (you may be most familiar with him as the author of the novel Psycho). In addition to the usual non fiction columns, there are short stories from the likes of Gerard Houarner and Wrath James White.

Visit www.CemeteryDance.com for more info on purchasing a copy. 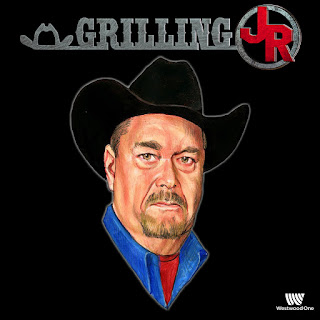 “Good Ol’ J.R.” –Jim Ross—was the voice of pro wrestling for many, whether you grew up watching NWA/WCW at 6:05 Eastern on Superstation TBS, or later during the “Attitude Era” of the 90s on Monday Night Raw. Ross had his own podcast for a few years, but a recent format change by way of new cohost Conrad Thompson has made this podcast “appointment listening” for those of us who pine for the glory days of the pro wrestling from our youth, before the Internet made everyone an “expert” and “promoters” like Vince McMahon decided to let viewers completely behind the curtain. Each episode of Grilling JR typically covers a pay-per-view event or supercard from the 80s or 90s as its focal point, with Ross providing his expert analysis and insight into the players and politics of the era. It’s much more captivating than any of the current product that WWE pumps out these days.

Available for free download on all podcast platforms such as iTunes.

Joshua Jabcuga is a freelance writer who has contributed to Kevin Smith's MoviePoopShoot site, ChuckPalahniuk.net, Cemetery Dance magazine, Scott Tipton's Comics 101, LitReactor.com, Doomed Magazine, and Blastoff Comics.com. Jabcuga has written three comic book miniseries for IDW Publishing, Scarface: The Devil in Disguise, The Mummy: The Rise and Fall of Xango's Ax, and Bubba Ho-Tep and the Cosmic Bloodsuckers. He currently writes for AllEliteWrestling.com, one of the fastest-growing promotions in the history of the squared circle. Follow him @Jabcuga on Twitter and Instagram.