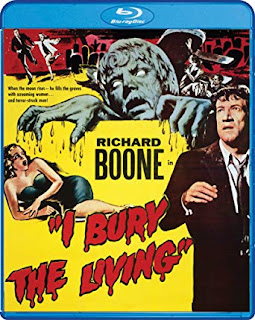 I Bury the Living is a cool little black-and-white psychological horror film from 1958. It was written by Louis Garfunkel (A Minute to Pray, a Second to Die) and directed by Albert Band (father of Charles Band), produced by Maxim Productions, and distributed by MGM.

The premise is simple, but very effective: Robert Kraft (played by Richard Boone) is appointed as the director of a cemetery. There's a huge map indicating which grave sites are reserved (marked with a white pin) and those that are filled (marked with a black pin). When a just-married couple cruise by the cemetery to tell Kraft that they'd like to buy two graves close to the groom's father's burial site, Kraft accidentally used black pins instead of white pins to mark their request. Tragedy strikes and the married couple is killed. Did Kraft cause it by using black pins instead of white? 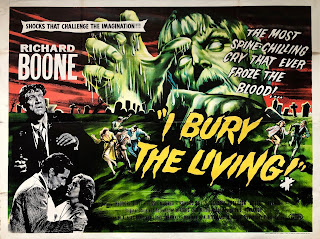 As the movie unfolds, more deaths are caused by more black pins, and Kraft wrestles with guilt as he begins to suspect that either he or the map with the pins holds the power of life and death. The title of the film is quite accurate, and the film is really fun.

I Bury the Living was shot in 1957, the same year that Boone landed the role of Paladin on the wildly-successful television western Have Gun - Will Travel. By 1958, when this movie was released, Boone was a bona fide TV star, with his show running for 225 episodes between 1957-1963. Character actor fans will also enjoy spotting Theodore Bikel (The African Queen) and Herbert Anderson, maybe most known for playing the father of rascally title character on Dennis the Menace. This was an early effort from Albert Band (it's the second movie he both produced and directed), but he would go on to be a big player in the B-movie scene all through his life, including the work he did with his son Charles with Empire Pictures and Full Moon Entertainment.

It's been said that I Bury the Living feels like an extended episode of The Twilight Zone, and that's an accurate assessment. At only 76 minutes, it's not much longer than an hour long episode of fifties television and the lean script throws very little away. The ending seems to be the thing that lets people down, including Stephen King, who wrote about the movie in his book Danse Macabre. Though it's a bit of a stretch, I actually really enjoy the ending and how it plays fair with the rules the movie has established instead of bringing in a deus ex machina twist.

I Bury the Living is available on Blu-ray courtesy of Scream! Factory. The disc has no bonus features outside of a trailer, but for the right price, it's a great addition to any horror fan's collection!