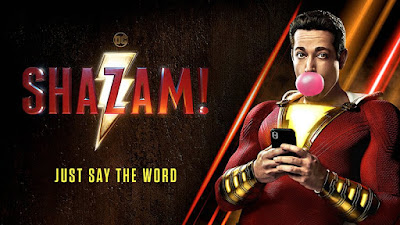 Shazam! is the latest film to adapt classic DC Comics characters (or Fawcett Comics characters, in this case) to the big screen, and it's the most fun I've had at a modern DC film to date. Maybe that's because I'm not overly steeped in the history and lore of Billy Batson, the mystical wizard, or The Rock of Eternity (which is the name of my album). Maybe it's because I've sat the last few DC films out, exhausted after the CGI spectacle of mass destruction fueled by Zack Snyder's desire to make this universe full of muck and grime, inspired more by the likes of Frank Miller and Alan Moore than by Neal Adams and Julius Schwartz.

When Shazam! works, it's because it's having fun with its central premise. Billy Batson, a troubled orphan with a heart of gold, is granted magical powers when he utters the secret word and is transformed into a hero bigger than Superman. The wonder and joy of a kid who suddenly finds he has super powers allows this movie to have a different perspective than we've seen in most of these films so far, and the plot is almost entirely driven by young people. For some, this is a barrier. For others, this is the appeal. I appreciated the different focus, and I thought the filmmakers mostly kept things from becoming too saccharine or syrupy, though the story does occasionally drift into these areas.

The child actors, chiefly newcomer Asher Angel and Jack Dylan Grazer (IT) really prop up the entire movie. Grazer, in particular, feels so authentic and real that I quickly identified him as the heart of the film. Zachary Levi (TV's Chuck) also does a good job playing both sides of the larger-than-life hero, displaying child-like qualities but also exhibiting the heroism that we expect and that hasn't always been a hallmark of these films. Mark Strong (Kingsman: The Secret Service) is required to do little more with his role as the villain than scowl and look menacing, but he does it with relish.

I couldn't help but notice that Shazam! frequently feels like two completely different movies that have been mashed together. Half of the film is the warm and moving story of an orphan seeking family, be it blood relatives or simply a group to call his own. This part of the movie is firmly PG-rated and seems aimed at families with younger children. The other half of the film is a hardcore supernatural horror film, complete with grotesque monsters that bite people's heads off talk like Cookie Monster on acid. No coincidence there, as this movie was directed by David F. Sanberg, who cut his teeth on horror films like Lights Out and Annabelle: Creation. These two disparate tones never quite blend together, with the film going from bright city streets to dark caves and murder in a matter of seconds. It's a movie constantly struggling with itself. It's also too long, probably by 30 minutes, but then again, just about every movie is too long these days.
But around half-way through the movie, I decided the good of this film far outweighed the bad for me. I have lamented (sometimes quite loudly) that there seems to be a lack of joy and true heroism in these DC movies, with morality often feeling like an inconvenience or afterthought to the filmmakers. All the heart and heroism I've been craving is here in spades, and it makes a big difference. I appreciated the naivete that ultimately drives this movie, as well as the appearance and existence of magic in the DC Universe, along with the possibilities that this introduces for the future. After all, Superman's two physical weaknesses are Kryptonite and magic. Hmmm...

I can't say Shazam! is a great movie, but it sure is a fun one. Even though it occasionally drifts into mean-spirited horror tropes (which would have been fine if not for the tonal whiplash they cause), the film often feels like a celebration, not a funeral. Shazam! isn't a home run, but it's a solid step into the direction. Mostly importantly, it's a DC Comics movie I feel enthusiastic about sharing with my own kid, and when it comes to this film universe, that's a rare--but welcome--change of pace.
Alan Moore Asher Angel comic book comic book movie David F. Sanberg DC comics DCEU Frank Miller Jack Dylan Grazer review Shazam superhero Zachary Levi