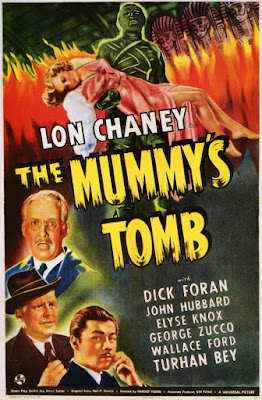 Like The Mummy's Hand, the film that preceded it, The Mummy's Tomb is the continuing story of Kharis: secret lover, night owl, maniac on the dance floor, and tool of his master, a high priest with a penchant for the tana leaves that give Kharis immortal power. Three leaves give life, nine leaves give him motivation. Ten leaves would be too many. Eleven is right out.

It almost seems like an afterthought on the part of the filmmakers, but this movie takes place THIRTY YEARS after the previous one (which would techincally place this movie in the 1970s). That's thirty years since Dick Foran's archaeologist, Dr. Banning, and Wallace Ford, his wisecracking sidekick, defeated Kharis in Cairo. In case we forgot what that actually looked like, the movie spends literally ten minutes (of a 60-minute running time) showing us footage of the previous film. What we discover is that Foran is now an elderly guy with gray hair (he's wearing semi-convincing old age makeup) and that his pistol packin' mama from the previous film, Marta (Peggy Moran) has shuffled off this mortal coil and joined the choir invisible. What no one expects is for another "High Priest of Karnak" (Turhan Bey, The Amazing Mr. X, looking very Lando) to transport a revived Kharis to America so he can take revenge on every single person that desecrated the temple thirty years ago. Let me say that again. A high priest sends The Mummy to America to kill all the people from the previous movie. Why did it take thirty years to hatch this plot? Why does Turhan Bey care about something he wasn't even around for? Why isn't Kharis a bunch of ashes? Who cares! There's a mummy loose in the city of Mapleton! Run for your lives! 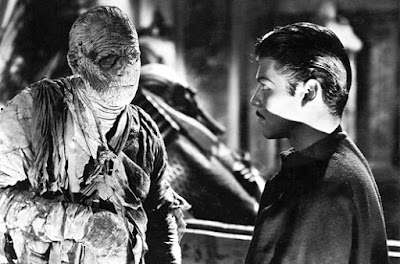 The fun, light tone that I appreciated about The Mummy's Hand is gone altogether, and I miss it. I can't help but feel like this movie takes itself a little too seriously given what it actually is. Instead, everything feels very dire, probably in an attempt to give this movie a tone that's more appropriate to the body count, which is definitely higher than in the previous entry. While Dick Foran and Wallace Ford reprise their roles, we have some new blood. John Hubbard (Duel at Diablo) plays Dick Foran's son, John Banning, and he has a love interest named Isobel, played by Elyse Knox, as seen in the movie Abbott and Costello Hit the Ice. Hey, wait a minute!!! Abbott and Costello again?! It would be nice if Elyse Knox had more to do here besides look pretty, but she really doesn't. There's a subplot that gets breezed by pretty quickly in which Bey, the High Priest, tells Isobel something about his plan to have her turned into a mummy so she can bear his immortal children. Wait, WHAT?

In the mummy suit this time is Lon Chaney Jr, The Wolf Man himself. Over the course of the 1940s, Chaney got to play quite a bit in the Universal Monster sandbox, starring as three of the big monsters (he was also Dracula...I mean Alucard....in Son of Dracula). It doesn't really matter to me that Chaney is in the suit, though. It's kind of a thankless role, as you can't see anything of the person inside and there's not much of a performance happening. I guess it's cool to know, and knowing is half the battle.

My big takeaway from this movie is that you can connect a line directly from this to the slasher horror films of the 1970s and 1980s. It's a strong connection, stronger than in any of the other Universal Monster movies so far. You've got an undead killer (a Shape, if you will) that cannot be stopped or slowed down, breaking into people's houses in the suburbs and killing them with his bare hands because of some grudge. If you want to take things even further, this movie basically plays out like the start of Friday The 13th Part II, where Jason Voorhees comes to seek revenge on the survivor of the previous movie. It's really cool to see that this was being done as far back as 1942. They had their own version of slashers in the forties! I guess they'd be called "chokers." 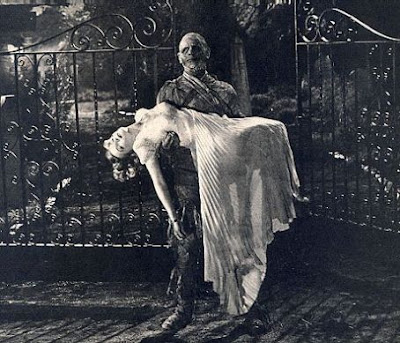 In some ways, I don't think The Mummy's Tomb is as good of a movie as The Mummy's Hand. I miss the more adventurous tone and the light-hearted stuff. Then again, this one goes more for straight horror, and those scenes work really well. It's hard to complain about anything that might not have worked, because this one is even shorter than the one that came before it. Besides, it's all personal taste, anyway. When it was released in 1942, it played on double bill with a Bela Lugosi horror movie called The Night Monster. What a night at the movies that would have been, huh? This one is still a B-film all the way, but it's going for a very different goal, and I think it succeeds. It's important for these films to stand by themselves and to be distinct (and therefore memorable), and so far they have. The first one was the romance with big production values and incredible makeup. The second one was the archaeology adventure in the desert. This third one has the monster attacking the suburbs thirty years later. The titles may be interchangeable, but the plots (so far) are not. We'll see if they can keep it up.