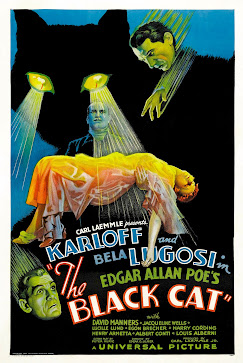 It's hard to believe that 1934's The Black Cat--with elements of satanism, incest, necrophilia, and let's not forget a character being skinned alive just off screen, which we witness by way of gruesome shadow--made it past the Hays Code. Granted, this film was released in May of that year, and it was in July that the Code Crackdown officially went into full swing, irreversibly altering the course of Hollywood during its Golden Age. But it feels like a wild, carnal ball of fire, shocking and beautiful, always alluring. Considering how much the censors hated horror, The Black Cat is a macabre miracle.

Bela Lugosi and Boris Karloff were approaching the movie from two very different paths. Lugosi was in the midst of financial troubles, while Karloff was being given a major push and billed simply as "KARLOFF." One might expect "The Magnificent" to follow the moniker. Whether it was ever admitted publicly or not, there was a sense of competition between the two horror stars, with Bela being eclipsed by Karloff, a star on the rise.  Both men had been at the foundation of Universal Horror during the talkie era, anchoring Dracula and Frankenstein respectively a few years earlier, and both men had built a following as legitimate horror stars. But this is the first movie where they appear together, and boy do the sparks fly. 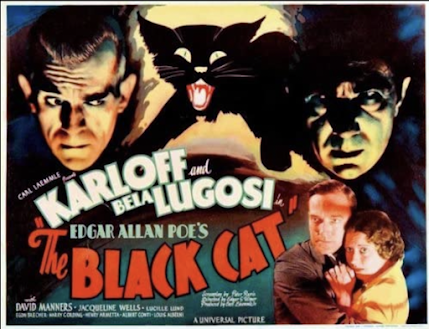 Karloff's character is Hjalmar Poelzig, a former war commander who has built an ultra-modern house upon the battleground where thousands lost their lives--a Superman villain from the Fleischer cartoons would feel right at home in these art deco digs. He dresses in black robes, studies the dark arts, and does his best Aleister Crowley impression as he wanders through a hall of dead women, perfectly preserved and incorruptible, suspended in display cases as collectible corpses. Lugosi plays Dr. Vitus Werdegast, a former prisoner of war who knows the crimes of Karloff's Poelzig and seeks revenge for not just the horrors he endured during the war and his imprisonment, but also for what Poelzig has done to his wife and child. Caught in the middle is a young newlywed couple, played by David Manners and Julie Bishop, who just happen to be in the wrong place at the wrong time. 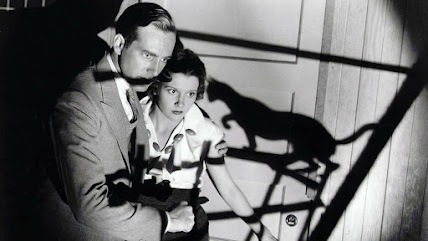 The Black Cat is one of the finest Universal Horror films, not only from the 1930s, but in the company's catalog. Inspired by the work of Edgar Allan Poe in title if little else, it presents some of the most horrific themes and elements found in any Universal horror film. Note the contrast between Karloff's luxurious, state-of-the-art mansion and the bones of destruction that it sits atop. Note the stellar use of light and shadow, the moving camera, and the expert direction from Edgar G. Ulmer, "The King of the B's" who marries German Expressionism with that oh-so-distinct Universal atmosphere to create something both chilling and magnetic. The Black Cat may also be the strongest team-up between its two stars, with both Lugosi and Karloff sharing the spotlight and delivering some of their finest work. Lugosi gets to be more of an anti-hero than a villain here, and Karloff eschews his traditional sympathy and pathos in favor of overt, remorseless evil. 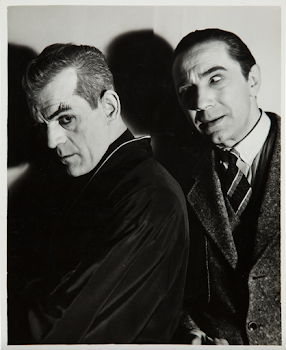 The Black Cat is included in Scream Factory's Universal Horror Collection: Volume 1 collection. Extras include two wonderful commentaries and the first of a multi-part look at the films of Bela Lugosi and Boris Karloff at Universal, as well as a one-hour feature on Edgar Allan Poe film adaptations. For those just starting to explore classic 1930s horror or for seasoned scream veterans, the film comes with the highest recommendation.