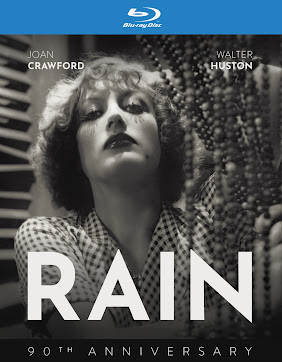 There's more to Rain than meets the eye.

Joan Crawford takes center stage, buried under so much makeup that she's barely recognizable. She plays Sadie Thompson, a prostitute who has come to the South Pacific island of Pago Pago in an attempt to turn over a new leaf, find herself, and outrun her past. While there, she receives every reaction imaginable from the people that she's boarding with: the younger men want her, the women despise her, and the older men remember younger, wilder days with a drunken twinkle in their eye. But it's the local missionary, played by Walter Huston, who will impact her most. His cold piety is at odds with his human weakness. The setting is a kettle coming to a boil and it's just about to blow.

Despite its lush Polynesian setting, Rain is a claustrophobic movie. The title comes from the torrential downpour that starts right after the opening title screen and persists until the very end of the movie. This is alleviated somewhat by a constantly-moving camera which follows our characters from room to room, outside, and back inside again in continuous, uncut tracking shots that must have inspired the likes of Miklós Jancsó and Brian De Palma. This is especially novel because most cameras were locked off during this era of film, with many movies being shot like the stage plays that inspired them.

Rain is adapted from a successful play from 1922 (adapted from a short story from 1921). This isn't the first or last film version, either: 1928's Sadie Thompson was a silent version starring Gloria Swanson and 1953's Miss Sadie Thompson stars Rita Hayworth. Both versions were better received than this 1932 film, with the common consensus at the time being that Joan Crawford didn't have the chops to play the layers that the role required. Even the film's producer and director, Lewis Milestone, damns her with faint praise, publicly stating "she has no technique: faced with the need for one, she would be at a loss. Put her into a given situation and she will react to it. That's her secret." Even Crawford herself said "I hope they burn every print of this turkey that's in existence."

While part of me understands these criticisms, nobody puts baby in a corner. Crawford's performance is certainly not subtle, but I can't think of many early 1930s performances that are. What comes through is a total lack of faith in any system, establishment, or organization. The film's biggest success is how accurately it conveys the Depression-era cynicism of a failed American dream. Sadie Thompson has seen the worst of humanity and knows that there is no happy ending. Without spoiling the film for those that haven't seen it, the narrative makes a stark and startling point about humanity, hypocrisy, and the ineffectiveness of anyone who says they have the answers. Whereas Gold Diggers of 1933 would provide escape from the Depression by promising that "We're In The Money," Rain is more honest. When someone tells Sadie that they're sorry for her, she replies "I feel sorry for the whole world, I guess." 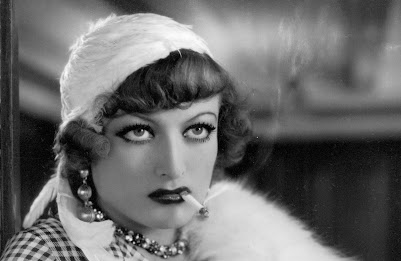 Not surprisingly, the movie has gained a lot of fans over the decades as we come to realize that it is not a bad movie at all, it was just ahead of its time. Because it slipped into the public domain in 1960 and has been easy to see, albeit through increasingly abysmal video transfers, generations have discovered Rain and found more to appreciate than those audiences in the 1930s were able to connect with.

Enter VCI, who have just released a beautiful, restored print of Rain for its 90th Anniversary. The 4K restoration was conducted by The Library of Congress in association with The Mary Pickford Foundation. The results are pleasing, with dramatically-increased clarity and depth. Film grain is evident, though not pronounced. Contrast has been boosted too, but hasn't been overdone. The source of the transfer bears some damage in the form of some occasional scratches (not surprising considering the film's age), but all in all, it's a fine presentation. Because the 4K restoration has been scaled down for Blu-ray, it's difficult to say how much better this would look in true native 4K, a privilege that only a select few early thirties films--mostly Universal monster movies like Dracula and Frankenstein--have enjoyed, as of this writing.

The new disc from VCI also includes a recut version of the film from 1938 by Atlantic, which snips 18 minutes. There are two commentary tracks--one from Mick LaSalle of the San Francisco Chronicle and another from historian Richard Barrios. A trailer and poster/photo gallery are included, as is a 1934 Betty Boop cartoon and a booklet with an essay by Marc Wanamaker.

I don't know if Rain is an overlooked classic, but I certainly think there's more to it than critics of 1932 were able to see. Crawford swings for the fences and the movie has a style and visual flair that was uncommon for its time. It's also a textbook example of Pre-Code cinema, with prostitution and a nihilistic view of authority, especially religious leaders--the very thing that would lead to the eventual Hays Code crackdown two years later. VCI has delivered a fine restoration with substantial special features that fans of the film won't want to miss.