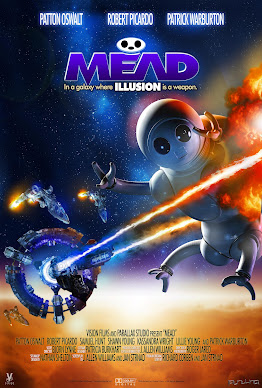 2022's MEAD doesn't look like anything else because there's nothing else quite like it. Any similarities to Pixar films or the modern Marvel zeitgeist owe more to the visual influence and style of Richard Corben and the words of Jan Strnad, the two men who first created these characters and designs back in 1972 for the underground "adults only" comic book Fever Dreams. Those comic origins shine through in the feature film, which retains the underground, independent spirit of the source material while striking a more all-ages tone that jettisons things like nudity from the original tale in favor of something more approachable.

MEAD is not just the name of the film, it's also the moniker of the mechanical wonder (voiced by Patton Oswalt) at the center of the story. The Mobile Extrasensory Autonomous Deceptor is a ship with a soul that can project illusions that are indistinguishable from reality. The ship itself was created with military applications in mind, but when the vessel and its pilot Friz (Samuel Hunt) fled their fate, they became the white whale of an intergalactic Captain Ahab, the comically-ruthless Admiral Gillette (Star Trek's Robert Picardo) as he pursues them across the galaxy. With companions both real and holographic (Lillie Young, Kassandra Wright), Friz and the ship just want to survive another day.

It's a big-budget premise, begging for millions of dollars and the best animation team that money can buy, but the movie exists largely because of the tireless dedication and hard work of one man. J. Allen Williams serves as producer, editor, animator, and director. Over a period of six years, he meticulously designed and animated the film all by himself using labor-intensive techniques. The final step was to film the actors on a completely green-screen background, which he was then able to drop into his almost-completed movie. Whereas other green-screen adventures like Sin City, The Spirit, and Sky Captain and the World of Tomorrow are Hollywood productions made by hundreds--even thousands--of contributors, MEAD was largely crafted on a computer in Missouri by just one man.

These singular origins lead to a film with a small budget (less than the cost of a car) and big ideas. Because it was made so far outside of the Hollywood system, most of the faces outside of the core cast are unfamiliar. Instead of a crew of thousands, it was animated and conceived for the screen by a single filmmaker, fueled by the love of a story he discovered in a head shop fifty years ago. Instead of a massive PR department willing to spend a fortune on promotion, it's being independently distributed and marketed. There was even a Kickstarter campaign to finance accommodations for the actors during the shoot. Picardo spent time at the director's house, cooking meals after the shooting day concluded. It's a family affair.

Nothing about MEAD is ordinary. It's probably not for everyone, but for those who can connect with it, they're in for something special. I believe the film will most likely resonate with the old school geeky audience, those that have watched countless hours of Star Trek, who have longboxes filled with comics, and who are familiar with underground publications like 2000 A.D. and Heavy Metal. But there's also an opportunity for a much wider audience to discover the film if they're willing to look past the unconventional origins--or perhaps more accurately, to embrace those origins as this movie's biggest strength.

I started this review by saying that MEAD doesn't look like anything else because there's nothing else like it. It's a high-concept, visually-ambitious all-ages tale of space-faring survivors that was made far outside of the studio system and bears the fingerprints of its creators. When so many movies today are created by corporations and executives as brand extensions and IPs to sell theme park tickets and action figures, MEAD feels refreshingly personal.

MEAD is now available on digital VOD platforms. Learn more at the Vision Films, Inc. site and at the film's official Facebook page.