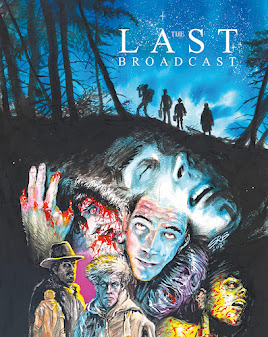 What is real and what is false? 1998's The Last Broadcast is a found footage film that asks this question and holds a microscope up to the then-nascent World Wide Web and the burgeoning internet technology that was just starting to trickle down to the average consumer. Told in a documentary, true crime style, The Last Broadcast recounts the mysterious deaths of local public access TV show hosts as they go in search of the mythical Jersey Devil in the Pine Barrens of New Jersey. Of the group that went into the woods on that fateful day, only one came back out, covered in the blood of his companions. Was it murder, or something far more sinister? The film seeks to uncover the truth of what really happened and separate fact from fiction.
The Last Broadcast is a horror film, but those expecting true terror are going to be disappointed. It's a slow burn with a focus on investigation and forensics that feels more like an episode of Dateline. The film is really about using technology to warp reality and spread misinformation. The public access series that the murder victims hosted is called Fact or Fiction, and the film continually asks us to question what we're being told. Though presented as a factual account of a real crime, the story is completely fictional, which the film finally tips in the closing credits. Attention is rewarded by the many inconsistencies that were deliberately peppered throughout the film, such as the occasional slip up of using someone's real name instead of their character's name, or events that we're told are one thing when we can clearly see that they are another. This is done to show the cracks in the lie, for those who are really watching.
None of this is by accident. The filmmakers behind this project, Lance Weiler and Stefan Avalos, are whip-smart students of film history who had seen the OJ Simpson media blitz of the mid-nineties and sought to make a film that was a commentary on how "reality" was marketed as entertainment. In inspiration, they drew upon everything from Orson Welles' F for Fake to 1967's pseudo-doc David Holzman's Diary. The film predates most of reality television, the internet as we know it today, and even the concept of catfishing. Here is a movie about fake news from 1998, two decades before the term itself slipped into the zeitgeist. And they did this all on a budget of only $900.
The movie also pioneered new ground in the technical department, having been shot on consumer-grade digital equipment and edited on a desktop during a time when a 4 GB hard drive cost $4000 and every second of completed video took ages to export. During distribution, the creators refused to convert their finished product to 35mm film and ended up sending their movie to theaters via satellite, making The Last Broadcast the first digitally shot, edited, and distributed film to play in major movie theaters. This was a year before George Lucas revolutionized digital distribution with The Phantom Menace. It's no wonder that Wired named Lance Weiler and Stefan Avalos among "the top 25 people helping to reinvent entertainment and change the face of Hollywood."
If you haven't heard of The Last Broadcast, that's because just months after its release, 1999's The Blair Witch Project became a global sensation and the poster child for found footage horror thanks to a 15-million viral dollar marketing push from Artisan. It's also worth mentioning that The Blair Witch Project is much more of a straight-forward horror story. The Last Broadcast is ultimately too smart and too meta to be commercially appealing.  To quote Stefan Avalos, it's "too intellectual."
Now many more people can discover the film thanks to a new Blu-ray release from 101 Films, a UK-based distributor that has begun releasing select films in North America alongside Great Britain. The Last Broadcast arrives in a beautiful slipcover with new artwork by comics legend Stephen R. Bisette and a booklet of revealing essays by Phillip Escott and Sarah Appleton, who trace the roots of found footage films and the role of the internet in the movies of the 1990s. On-disc special features include two commentaries from the filmmakers: one from 1999 and another from 2006. A new behind-the-scenes documentary runs thirty minutes and looks back at the production and legacy of the film. Additional vintage behind-the-scenes featurettes are included that examine the film's production, post-production, and distribution phases. The disc is rounded out with exclusive interviews, clips from the fake public access show, one of the actors performing two folk songs on his guitar, a fun post-script shot after the release of the movie explaining "what really happened," a "Gallery of Gore" containing fake autopsy images, poster and box art, and the trailer.
When viewed as a horror movie, The Last Broadcast underserves in the scares department and doesn't have enough action or violence to keep things moving along. But as a cinematic experiment, a technological breakthrough, and a meta-commentary on the ease in which misinformation can be spread through the internet, it becomes something much more. The project is packed with big ideas and questions. In the end, it's entirely up to the viewer to decide how deep they choose to pursue them.
101 Films 1998 behind the scenes Blu-ray Dateline digital found footage horror internet Lance Weiler murder mystery review SOV Stefan Avalos The Blair Witch Project The Last Broadcast