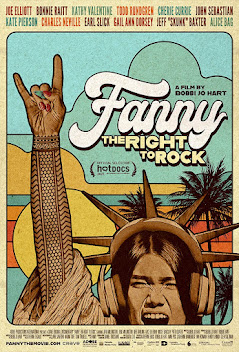 History seems to have forgotten Fanny, an all-female hard rock band that formed in the late sixties and may be remembered as the first "girl group" to play their own instruments and release a full rock and roll album. The story of these cheekily-named rock and roll pioneers has never really been told, an injustice that David Bowie (who dated a member of the band for a year) sought to rectify twenty years ago. It's taken this long for the story of Fanny to finally be told, thanks to this new documentary from writer/director Bobbi Jo Hart.
The members of the band guide us through their formative years, with sisters Jean and June Millington recalling their youth as Filipino immigrants being raised in America during a time of civil unrest, through the early growing pains of the band, and finally to a breakup at the peak of the group's power. In addition to the members of Fanny, we also hear from some of rock's biggest names: Joe Elliott from Def Leppard, Todd Rundgren, Bonnie Raitt, Kate Pierson from the B-52's, Cherie Currie from The Runaways, John Sebastian from The Lovin' Spoonful, Steely Dan's Jeff "Skunk" Baxter, and others who were there.
Half of the movie is a look back while the other half is a chronicle of a Fanny reunion project circa 2018, which would ultimately be called Fanny Walked the Earth. While it's great to see these women rocking well into their late sixties and early seventies, the narrative does feel a bit disjointed and I'm not sure what the focus is here. Is it a historic chronicle of a criminally-forgotten rock and roll band? A promotional film for their reunion album? An agenda piece about feminism, gay rights, and racism? To serve all three spreads each of the elements a bit thin. We bounce back and forth between the timelines, and I'll admit that I was far more interested in the seventies rock and roll era than in the modern reformation, which bears little resemblance to the music from 50 years ago and sounds more like pop country than hard rock. Still, there's real drama and pathos as one of the members of the band suffers a serious medical issue during the filming of the documentary, just days before the band was supposed to take the stage in triumph.
The 2022 DVD release of the film (there is no Blu-ray) from Film Movement includes 35 minutes of additional scenes that cover the pioneering influence of the band on a new generation of musicians. We also get to tour "Fanny Hill," the Hollywood home of the band during their wild early days, with drummer Brie Howard accompanied by her grown granddaughter, the child of Playboy Playmate Brandi Brandt and Motley Crue bassist Nikki Sixx. Music and rebellion runs in the family.
Fanny: The Right to Rock goes a long way to reminding a world who has forgotten the band that they were, in fact, first on the scene, though I'm sure this statement has been contested. I wish that there was more CLASSIC music from Fanny in the documentary and I wish that we'd have spent more time seeing and hearing about the wild, drug-fueled hedonism of rock's most debauched days, but maybe that's asking a bit much since these women are now mothers and grandmothers. The film is a welcome addition to the rock-doc field, but spending so much time with the band in their new, much softer incarnation is a double-edged sword: it's great to see these rock and roll survivors all these years later, but there's little sign of the warrior women who stomped the stage decades ago in a haze of fog and smoke, taking no prisoners in their assault on musical mediocrity.
Bobbi Jo Hart Brandi Brandt Brie Howard Fanny Jean Millington June Millington Nikki Sixx The Right to Rock