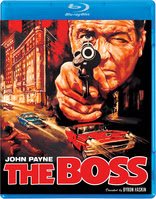 My first exposure to John Payne, like so many others, was through 1947's Miracle on 34th Street, a feel-good holiday movie that finds the actor starring opposite Maureen O'Hara in a romantic, good guy role that remains a favorite of many, reportedly including Payne himself. But in the decade that was to follow, the actor would continue his career by appearing in a bevy of crime, noir, and western pictures that were about as far as you could get form the fantastical charm of his earlier successes. With titles like Kansas City Confidential, 99 River Street, and Hell's Island, Payne's career path took him down the dark side streets of cinema.

1956's The Boss is unlike any other John Payne movie I've seen, stripping this likable actor of any charisma and affability. He plays Matt Brady, a returning war vet (that's Dubya Dubya One) who has come home from the front lines to find his brother running an empire. But Matt has a mighty temper and a taste for liquor that comes at a high cost, including a relationship with the love of his life. Before you can say "you've had enough, Matt," he's drunkenly married a plain woman that he thinks is a prostitute and inherited his brother's business, leaving him as the boss of the entire outfit. With a cold ruthlessness and hunger to own it all, Matt Brady is about to trade his soul for success. 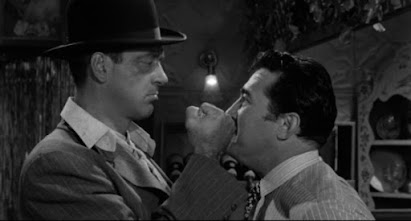 John Payne turns in a despicable performance as a narcissist with virtually no positive traits. He's arrogant, violent, unkind, and completely without mercy or remorse. When his business successes lead him into politics with the help of a corrupt lawyer, it somehow all gets even worse as his thirst for power and control becomes unquenchable. Unsurprisingly, the screenplay comes from blacklisted Hollywood writer Dalton Trumbo (Johnny Got His Gun) under the pseudonym Ben Perry. It's an angry script, but then again, Trumbo was an angry man, having been vocal about what he viewed as injustice and hypocrisy not just in Hollywood, but in the entire U.S. government during and following World War II. The most striking thing about the story is how easily it translates to today's political climate in which many U.S. citizens believe in the total corruption of virtually every political office. Trumbo was also drawing upon the real story of Tom Pendergast, an infamous Kansas City political boss, though the screenwriter wisely avoids any overt party lines, instead allowing us to separate the cautionary tale from our own political leanings. However, the story remains a scathing indictment of corruption and moral compromise, and has lost none of its weight in the intervening years. If anything, one only has to turn on the television for this film to feel more relevant today than it has been in decades. Credit also goes to director Byron Haskin, a wonderful talent who brought such classics as Disney's Treasure Island and War of the Worlds to screen, not to mention lesser--but still enjoyable--films like The Naked Jungle and Conquest of Space. 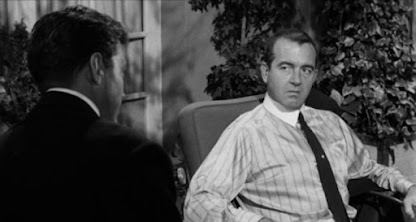 The Boss makes its Blu-ray debut in Kino Lorber's Film Noir: The Dark Side of Cinema VII with a new 2K scan that looks beautiful. All three of the films included in this box set come from the United Artists catalog by way of MGM, and all three films carry a loose through-line of political or corporate corruption. As is often the case with these Kino Lorber box sets, the definition of "film noir" is loose. While The Boss retains several hallmarks and themes that are common in noir, the film is more of a melodrama than a crime movie. Alan K. Rode delivers an excellent, thoroughly-researched commentary that mixes the scholar's impeccable academic perspective with approachable anecdotes. The Boss is one of the last films to feature John Payne in a lead role. With the rise of television, many veteran actors were finding work on the small screen, and 1957 would see the star taking up the mantle of The Restless Gun for two seasons on NBC. Considering The Boss is one of Payne's final films, it's somewhat fitting that it presents is such a reflective, thoughtful story about the consequences of our choices.