Is The Warriors an under-appreciated gem? This 1979 genre-bender from Walter Hill came along at the same time as Mad Max and outright predates the post-apocalyptic cycle of the 1980s. And yet it doesn't seem to enjoy the same cultural cache as some of its spiritual brethren. Sure, every movie geek worth his salt has uttered those immortal lines "Warriors...come out to play-ee-aay!" But the movie still feels more like a cult favorite than a widely-regarded classic. Maybe that's why we love it so much.

For those that have not yet discovered this magical mystery tour of Inner City New York by way of a nightmare near-future: Manhattan is overrun by a myriad of street gangs, each one more colorful than the last. You've got The Turnbull AC's, The Baseball Furies, The Orphans, The Lizzies, The Punks, The Electric Eliminators, The Gramercy Riffs, The Rogues, and of course, The Warriors, among many others. Each gang has their own territory that they can't venture outside of without risk of a brawl (or worse), with The Warriors occupying Coney Island to the south. When Cyrus, king of all the gangs, calls for a summit in The Bronx, everyone puts down their weapons and converges upon a park as their supreme leader tells them that they can control the entire city if they unite, since they outnumber the cops. In a turn of events that feels like a sinister echo of history, Cyrus is assassinated by the leader of The Rogues, who blames it on The Warriors during the ensuing confusion. As the mayhem turns into mob justice, The Warriors must flee the scene and get back to their home at Coney Island, but every single rival gang now stands in their way. It's going to be a long night. 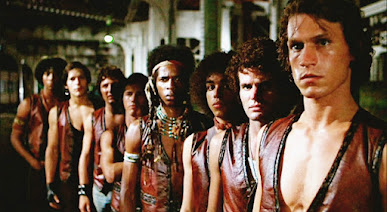 This is a great premise, but it takes talented people to turn that premise into reality. The cast is made up largely of actors who were then unknown, including Michael Beck, James Remar, Dorsey Wright, David Patrick Kelly, and future Too Close for Comfort co-star Deborah Van Valkenburgh. It may come as a surprise to some readers to learn that multiple members of the cast had come from musical theater, including at least two that had been in Hair. Tough guy James Remar had played Kenickie in the touring production of Grease. I believe this connection to theater, dance, and live performance is a key to the movie's success. The Warriors themselves are often silent, but their bodies are finely-tuned instruments that tell a story that words cannot. 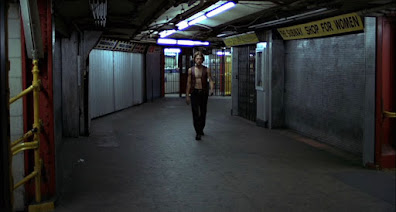 The story is based on a novel by Sol Yurick, adapted by David Shaber and Walter Hill, who changed it into something much more stylized and comic-bookish in nature, partly at the demands of Paramount, who were trying very hard to avoid controversy around the overt racial themes of the book. It's all still there, bubbling under the surface. The Warriors are in the wrong place at the wrong time in the wrong part of town. "You don't look like us, so we're going to make you regret coming here." The hatred of "the other."  Sure, The Baseball Furies may look like the love children of The Yankees and KISS, but they represent something primal. Not coincidentally, Yurick drew heavily upon the ancient tale of Anabasis by Greek writer Xenophon as his inspiration for the novel. Nothing is new, and every story is a ripple of a stone thrown countless lifetimes ago. Sidebar: unfortunately (but not surprisingly), the studio was shaken when real gangs turned up in theaters to watch the movie and inevitable fights broke out. Fearing larger backlash, Paramount not only altered the marketing of the movie, but allowed theaters who didn't want to show it to void their screening agreements. Maybe The Warriors was destined to be a cult movie from the very start. 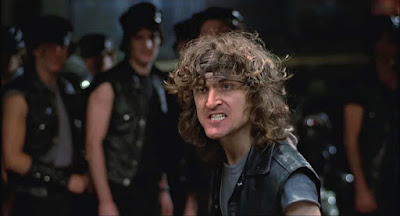 The film looks spectacular, thanks to a decent budget ($4 million) and the cinematography of Andrew Laszlo, who ushered in a new era of his career with this film, following it with high-profile work on Shogun, First Blood, and Star Trek V. Fans of The Warriors will also want to seek out 1984's Streets of Fire, which finds Walter Hill and Laszlo reteaming to tell another urban story that is largely a spiritual sequel to their 1979 achievement. The Warriors also sounds wonderful with an early synthesizer score and a great tune by Joe Walsh, whose song "In the City" was featured on the film's soundtrack and also re-recorded for The Eagles' album The Long Run. 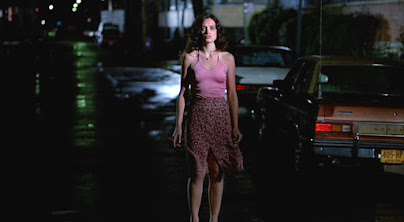 In 2005, the film was given a "director's cut" that adds a new comic-book-style prologue and heavily hammers home the Greek origins of the story. As a consequence, the original cut has been very hard to obtain on disc for the better part of 20 years. Now all that has changed with the release of a new 2-disc box set from ViaVision's Imprint Films. The first disc presents the director's preferred version of the story with a host of features that includes a new audio commentary by Chris Poggiali and Michael Gingold, an introduction to the Director's Cut by Walter Hill, and a four-part, 63-minute documentary feature, both of which have been carried over from the 2005 DVD. For me, the director's cut lacks the immediacy of the theatrical cut. The new prologue featuring comic book Spartans and a dramatic voiceover feels like it's from a completely different movie and only serves as a barrier to our getting to the actual start of the story. In his introduction, Walter Hill says that he dislikes tinkering with movies after they're made, and yet here he is, doing the same thing George Lucas has done time and time again. It's worth mentioning that outside of the tacky prologue, most of the changes to the director's cut are very small and will mostly go unnoticed. They account for just a few seconds of screen time. 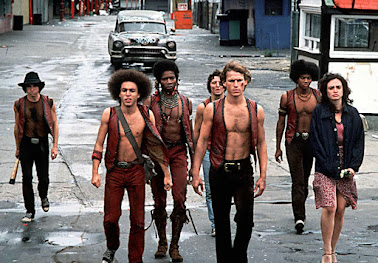 Thankfully, Disc 2 is a treasure trove for fans of the film. We get the original (and superior) theatrical cut with a new audio commentary by Walter Chaw, ten minutes of deleted scenes from the television version (presented in best available quality and sourced from video tape), brand new 10-15 minute interviews with composer Barry De Vorzon, actors David Patrick Kelly, James Remar, and Dorsey Wright, plus a 21-minute look at the Greek origins of the tale, a video essay by Chris O'Neill, a photo gallery, and trailers. The new interviews with the actors find them retelling many of the same stories from the 2005 documentary that's included on Disc 1, but it's still great to catch up with them 17 years later, with all the added perspective the intervening years have provided. 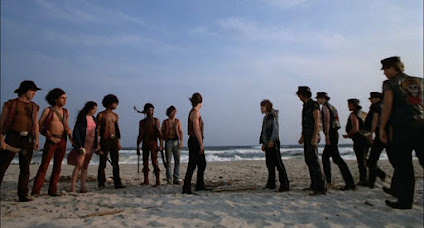 The Warriors is a wonderful film that has something for everyone. It's indefinable in terms of genre, though it wears its influences on its sleeve. Sometimes it's a western with gangs standing in for lawless gunfighters and showdowns that remind us of dusty gunfights at sundown. It's also a samurai story in which baseball bats take the place of swords and where honor is the most important quality. Characters that behave dishonorably are punished, and those who stray from the path become ronin, forever caught in a masterless limbo. Lest we get too heady, it's also a rock and roll masterpiece that takes us on a walking tour of New York City circa 1979, long before gentrification forever changed the face of America's biggest city. Perhaps the film is indeed an under-appreciated gem, but thanks to a gorgeous new box set and support from Paramount, there's never been a better time to come out and play.