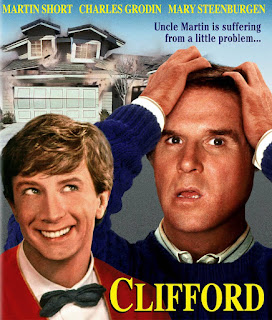 Clifford is the kind of movie that I can't believe exists. It's so strange and, frankly, so uncommercial, that the fact that it was made in the first place defies all odds and expectations. Upon further digging, it's a film that sat on a shelf for three years, endured extensive reshoots, and that the screenwriters were so embarrassed by that they used a pseudonym. Does that make it a bad movie? Not really. In fact, as I write this, I'm coming to the realization that I'm a fan. But I also have to admit that my interest in the movie mostly comes from how overtly weird it is.

This 1994 oddity stars Martin Short, who was 37 years old in 1990 when the production began and in his 40s by the time it actually hit screens. Short plays the title character, a 10-year-old boy who loves mischief and dinosaurs and who causes havoc whenever he doesn't get his way, which is most of the time. Clifford's singular goal is to go to Dinosaur World, a fictional Los Angeles theme park that is essentially the MacGuffin for the entire plot, similar to Wally World in National Lampoon's Vacation. After nearly causing a plane crash, his parents (Richard Kind plays his father) pass him off on to Clifford's uncle (Charles Grodin), who dislikes kids. The catch is that Grodin's love interest, played by the always-buoyant Mary Steenburgen, loves kids and needs to see some paternal affection from Grodin if she's going to marry him. Even better, Grodin is an architect who helped design Dinosaur World! The table is set; let the games begin. 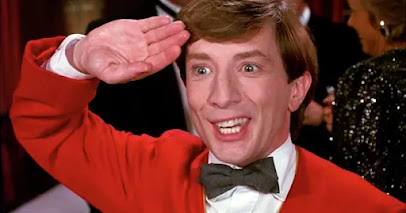 Technically, the movie is a comedy, but we must remember that this label was pretty loose in the 1980s and 1990s. Clifford isn't funny, it's mostly just bizarre. Martin Short is supposed to be a child, but he's clearly a grown man. When he does terrible things that result in property damage and possible injury, are we supposed to laugh? What about his clear sexual attraction to Mary Steenburgen? At best, we have a movie that's subverting the model typified by movies like Problem Child, but that's really why I think this movie exists: subversion. To buy into the premise, we must first buy into a grown man playing a child who isn't really a child. It's a logic that the movie never quite establishes, and can break the whole experience if the viewer can't suspend disbelief.

But around half-way in, something wonderful happens as the film stops pretending to be family fare and embraces its inner darkness, allowing the chaos to be unleashed. When the movie is allowed to be what it seems to have wanted to be all along--a pitch-black dark comedy--we finally understand what we're seeing: characters being punished for their selfishness. The final act of the film finds Grodin having a total mental break and trying to kill Clifford in Dinosaur World--realized through matte paintings and practical effects that do not disappoint. It's like something out of an early Tim Burton movie, complete with a rollercoaster dark ride and animatronic dinosaurs that malfunction and transform into instruments of certain death. Truly unreal stuff that you'll never see anywhere else and that must have been nightmare fuel for any kid at the time. 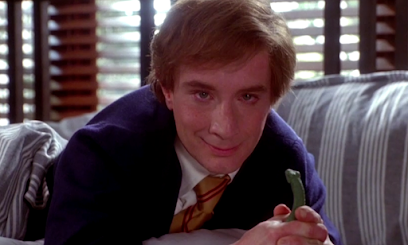 But wait, it gets even stranger. This is an Orion movie, made during a time when the studio had fallen upon dire financial circumstances. As such, it sat on a shelf for years. In 1993, three years after principal photography began, Martin Short came back to shoot new scenes in the form of a framing device which takes place in the future and features the actor in old-age makeup as a now-wise old priest giving advice to a young runaway orphan, played by soon-to-be Boy Meets World star Ben Savage. The new scenes appear to be an attempt to give the movie more heart and to perhaps soften the darkness of the core story, but they fail miserably and feel insincere. During the time that this movie sat on the shelf, Martin Short had become even more of a star, appearing in Pure Luck, Father of the Bride, and Captain Ron. Were the reshoots an attempt to capitalize on Short as a Robin-Williams-style A-list family film actor? It adds another level of ego to what already feels like a vanity project.

It's also worth mentioning that the screenplay was crafted by William Porter and Steve Kampmann, who had written the Rodney Dangerfield vehicle Back to School, followed by The Couch Trip, starring Dan Aykroyd, Walter Matthau, and Charles Grodin, and the romantic drama Stealing Home, starring Mark Harmon and Jodie Foster. SCTV alum Paul Flaherty (brother of Joe) directed this movie, which may explain why it feels a bit like a comedy sketch that's been blown up. Believe it or not, the film was lensed by cinematographer John A. Alonzo (The Magnificent Seven, Chinatown) and the score was composed by Richard Gibbs, who weds the attempted warmth and mischief together into the kind of orchestral majesty that movies no longer utilize. 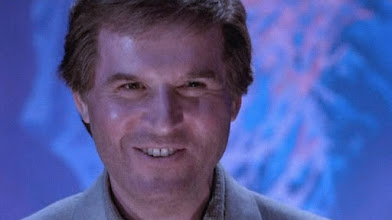 Clifford was a gamble that ultimately failed to pay off at the box office. It cost an unbelievable 19 million dollars to make, but only recovered $7 million when it was finally released in 1994. Orion filed for bankruptcy and effectively put the brakes on the careers of both writers and the director, who would not work again in such capacity until after the turn of the millennium. And yet, Clifford endures as a cult classic that's being rediscovered by audiences who are tired of CGI billion-dollar spectacles and who respond to the sheer insanity of the film. Now it's available on Blu-ray from Scorpion Releasing in a bare-bones release that features a reversible art wrap. Originally pressed in 2020, the sold-out edition is now repressed and available once again.

Revisiting Clifford is a bittersweet experience that reminds me of how the mid-nineties were the final days of unlimited possibility at the cinema. It was the last time that directors, actors, and writers could take a risk on something truly bizarre, when studios were releasing movies that didn't appear to have been shaped by a corporate cookie cutter, and when audiences would willingly follow mainstream films into strange and unfamiliar territory. Considering the lack of box office success and the poor word of mouth from audiences and critics alike at the time, it makes sense that these oddities were doomed to that big Dinosaur World in the sky, but at least we still have the fossils of that fertile, creative age.