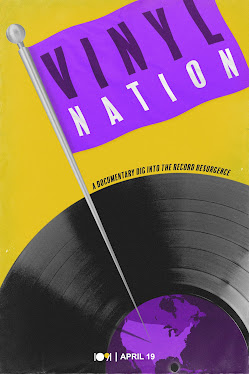 As a documentary about the resurgence and proliferation of record collectors and enthusiasts, Vinyl Nation has quite a challenge set before it. After all, the hobby means different things to different people. For some, records represent a tangible connection between the artist and the listener. For others, it's a decorative item that can also be spun and enjoyed. Still others prefer the warm, analog sound over digital.

Allow me to establish my bona fides so you know where this review is coming from. I am a massive fan of vinyl records. I own thousands of them, both vintage and new pressings, and vinyl was my first format. I am older than digital. I am even older than CDs. I enthusiastically attend record shows, I support my local record store, and I lustily seek out new discoveries and obscure oddities alike. Records make me happier than just almost everything else. Because of this, and because record collecting has become so trendy that you can't throw a 45 rpm adapter without hitting a YouTube channel about the subject, I approached Vinyl Nation with a list of things that I hoped would be covered. Frankly, most videos and films about the topic tend to be very heavy on the hipsterism and a little light on reality. Thankfully, Vinyl Nation covers every single topic that I was hoping it would, even if it doesn't quite have the time to delve as deeply into particular areas as I'd have preferred. It's hard to encapsulate all of the different perspectives and talking points on the topic, but the film does a remarkable job with the 92 minutes that it has. 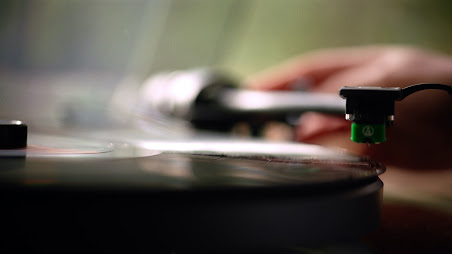 As you've probably surmised from the title, Vinyl Nation is a look at the record boom in the United States. The filmmakers travel across America to many of the holy hotbeds of music history: Austin, Memphis, San Francisco, Philadelphia, Nashville, Detroit, NYC, and more. In each of these locations, they talk to the fans, record shop owners, and the labels that manufacture and release vinyl, such as Third Man Records. Record Store Day serves as the introduction to the story, and it's a fitting start. After all, this annual event started as a way to resurrect dying music stores and has, over time, become a global holiday for music enthusiasts that marks the only way fans can find rarities and unique represses. As the camera lingers upon a long line of customers that winds down the sidewalk, fans discuss what they hope to find once they are allowed inside the shop. They're all grateful for their local record store and are eager to spend as much money as their budget will allow (or more, as many record fans know) to get those sacred slabs. 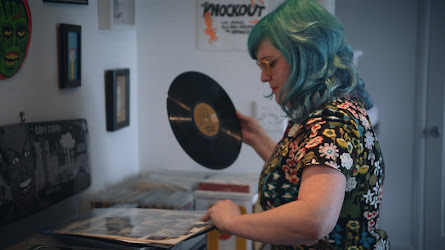 The irony, of course, is that Record Store Day has become something of an exclusive, expensive event--sort of a spending holiday for audiophiles--and that vinyl collecting now comes with some distinct class barriers. Not everyone has $30-50 to drop on a new pressing of a Beatles album or a rare reggae record, and those high prices can serve as a wall for young people eager to get into the hobby. Enter vinyl as a fashionable trend, which the doc also discusses. When Urban Outfitters, a chic youth-oriented clothing store, started selling vinyl in their stores, it was as a collectible and status symbol, not something to be listened to. But people started buying the vinyl and the inexpensive, entry-level Crosley turntables that the store offered as a colorful room accessory. As the trend grew, these new collectors started to connect with the music on those pieces of plastic. The tangibility matters: holding it, smelling it, looking at that large album artwork, placing the music on the platter and dropping the needle...it's a ritual that cannot be replaced by a Spotify stream. 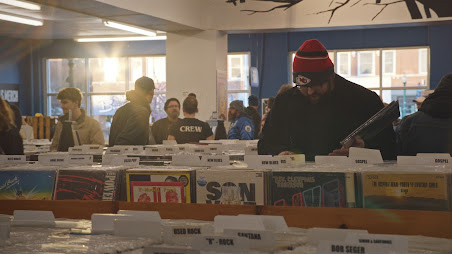 But doesn't all this sound awfully inconvenient? Yes, and the documentary covers that, too. One gentleman recounts how he had moved into his new house and couldn't get the truck as close as he would have liked, so he had to haul box after box of records in all by himself. His new vow to himself after the experience was that he would not buy a new record without getting rid of three. Others talk about the frustrating fragility of the format, which is easily scratched and warped. Bad pressings, bad customer service, elitism and gatekeeping go hand in hand with the hobby. How do young, environmentally-conscious fans of the format justify the undeniable impact on the environment? And do vinyl records really sound better? The documentary even asks the question more collectors should be thinking about: what happens to your collection when you're gone? All of these topics are given considerable thought, and the answer varies from person to person. Therein lies the strength of the documentary, which does not represent the voice of the filmmaker, but draws multiple conclusions from a wide array of listeners and collectors. 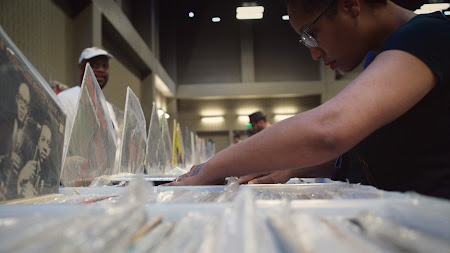 The end result is a film that does a nice job of representing what vinyl means to lots of different people, and that's a good thing. As a life-long vinyl enthusiast with a massive collection, my perspective is going to be much different from a 20-year-old who just got a Crosley and loves to make TikTok videos about their favorite album covers. But am I any more pure in my passion than they are? It's good to get other viewpoints and to see how much joy this singular pastime can bring to so many different kinds of people from all races, genders, economic groups, and parts of the country. Music is a unifier, and in a world that grows busier by the day, it's wonderful to see not only the recovery but a full-blown resurrection of a format that seemed to be long gone, daddy. 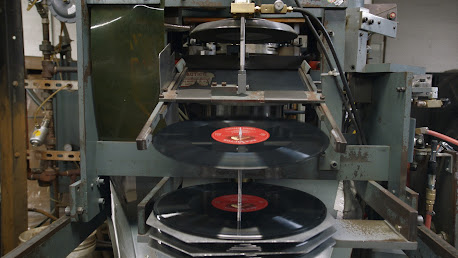 Vinyl Nation is produced and directed by Kevin Smokler and Christopher Boone. It was completed in 2020 but is just now seeing distribution on Apple TV and Prime Video. Outside of the U.S., it's available on Vimeo On Demand.