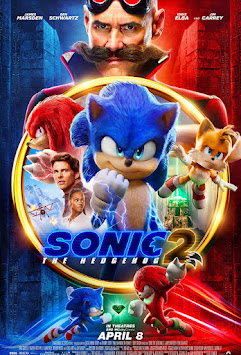 Two years ago, I had very nice things to say about the first Sonic the Hedgehog film, a movie that surprised me by being more than a soulless cash-in on a classic video game property. After all, the film had been in the headlines because of fan backlash against the strange design of Sonic himself. Paramount pleased fans by fixing the issues before the movie hit screens, showing that they cared about pleasing the gaming community and thus differentiating themselves from the pack of generic CGI kid fare. The film further impressed me with a strong story, likable characters, and its strong themes of family. Now Sonic the Hedgehog 2 debuts in theaters a mere 27 months later. It's bigger, louder, and longer, but it's not better.

Sonic 2 was made almost completely during Covid lockdown, with work beginning just as the entire world was shutting down. The production team and the visual effects artists have no doubt been working around the clock these past two years to bring this to cinemas as quickly as possible, and for the most part, there are no cracks or seams in the CGI work, the presentation, or the overall look of the film. It's a polished and well-crafted film...at least visually.

Where things feel much looser is the screenplay, which abandons the themes of family and the search for belonging that made the first one stand out as more than just a product. Instead, this movie pays quick lip service to the idea that Sonic needs friends, since he's still the only one of his kind on our planet. That changes with the arrival of Miles "Tails" Prower, a fox who uses his tail as a propellor which enables flight (voiced by Colleen O'Shaughnessey, the voice of Tails since 2014), and Knuckles the Echidna, a surly tough-guy (voiced by Idris Elba).

Jim Carrey is back as well, and is on the record as stating that this may very well be his final film. It's a shame, because Carrey has proven himself to be a gifted actor with may levels and a deep, soulful side that has won him accolades and awards. The worst of his critics will still say that he has made most of his fortune by acting like a clown on crack, with over-the-top antics standing in for a true performance. I never agreed with this; even in Carrey's wilder roles, such as Ace Ventura, Dumb and Dumber, and The Mask,  there was a balance to his characters. That feels absent here. I enjoyed his performance as Doctor Robotnik in the first Sonic movie, since it had been so long since we'd seen that aspect of his sillier comedic roles, but this takes things even further into the realm of mania and is exactly the kind of cartoon performance that his critics have used against him. If this is Carrey's swan song, it's a shame it's so soulless.

It gets worse: standing in for the sweet and gentle plot about finding a home is a cut-and-paste storyline that is overflowing with generic elements we've seen over and over again. As it turns out, there are gems that can be brought together (just like Marvel's Infinity Stones) and they will grant the wielder unlimited, god-like powers. I know the Chaos Gems are from the game series, but their depiction here feels very derivative and Thanos-like. Furthermore, this McGuffin sets our characters out upon what is essentially a fetch quest to be the first to get this object; whoever succeeds will have the power to destroy the entire world. There's even a giant light beam from the sky over the object! This is blockbuster by the numbers.

One of the things I appreciate about the first movie is the way it weaves its human characters (specifically James Marsden and Tika Sumpter) into the plot, but Sonic the Hedgehog 2 removes those human characters from the story almost immediately and sets them aside for the entire first half of the film. In fact, the first hour of this movie (which, by the way, surpasses two hours) feels like filler. Set pieces and a dance-off take the place of plot momentum and do very little to advance the story. Things pick up during the second half of the film, but many of our characters simply don't have enough to do.

I can't help but wonder how rushed the screenplay was. How do you turn around a blockbuster movie that relies heavily on high-quality CGI and visual effects in such a short amount of time? The script comes first and nothing else can be done until that's locked. Movies that don't rely so heavily on CGI can still work things out as production moves along, but this movie, with near wall-to-wall effects shots, would have had no such luxury. What if this film had been given 6 more months of story development? What if studios put quality above deadlines?

The target audience for this movie likely won't notice or care. The first Sonic the Hedgehog movie felt very much like a family film, enjoyable for all ages. Sonic 2 feels marketed to children, leaving the parents and older fans out altogether. Notably, my screening was indeed filled with pre-school age children. Don't get me wrong, this movie is fine, and the last half is so jam-packed with action and impressive battles (including a showdown with a giant robot that looks like a cross between Marvel's Juggernaut and Iron Man's Hulk Buster Armor) that viewers may very well forget how empty things had been up until that point. As a big-screen adaptation to a famous video game franchise, Sonic The Hedgehog 2 is fun enough as mindless entertainment meant to sell games and merchandise. If the first movie didn't exist, I'd accept this one for what it is. But the first movie does exist, and I can't help but lament that what made me care about these characters two years ago got lost somewhere in the rush to bring this sequel to the screen.