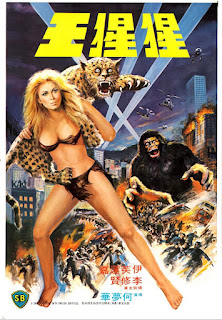 1977's The Mighty Peking Man likely wouldn't exist at all of not for the Dino DeLaurentis King Kong remake from one year earlier. In fact, as exploitation movies go, most of the movie is actually a beat-for-beat recreation of the blockbuster, but with an added "jungle girl" element that sees the sexiness of Jessica Lange in a skimpy wilderness outfit in the DeLaurentis film and cranks the dial to 11 by casting Evelyne Kraft, a buxom blonde beauty from Switzerland, as a Tarzan-like survivor deep in the jungles of India.

In the story, reports have surfaced of a giant ape creature attacking a village in the Himalayas. Some enterprising businessmen with unscrupulous motivations (this seems redundant, yes?) put together a team of explorers to go and find the big guy, but at least a few of the crew don't believe the creature even exists. Soon, one of the good guys (Danny Lee) finds himself separated and alone, face to face with the monster himself. It's then that he's rescued by Ah-wei the jungle girl (Evelyn Kraft) in a fur bikini that is so tattered that it often fails to meet it's basic function of concealment. Ah-wei is friends with the giant beast, who mostly just wants to protect her. Before you can say "music montage," the two fall in love and we get some truly bizarre stuff, including Kraft twirling a leopard around on her shoulders in slow motion. Because we can't have nice things, the behemoth is soon captured and chained, taken back to the big city, and marketed as the centerpiece of a spectacle show where people can pay to come see "The Mighty Peking Man."

The messages of unchecked greed and commercialism come across loud and clear, and may actually translate even better than they do in the 1976 King Kong film because of the complete and total innocence of Kraft's jungle girl. She is, for all intents and purposes, a child in an adult's body. She doesn't know the ways of man or his lust for money and power, so in some ways, we have twice the reason to care about our tragic transplants. There's a naïveté and sweetness to this story that comes from its Hong Kong origins that isn't as present in the DeLaurentis film or many of the other Kong-sploitation movies of the late seventies. Still, every King Kong movie is at least partially also about sex, especially the DeLaurentis version, and that's here too.

Still, at a big budget of six-million Hong Kong dollars (equivalent to $1 million USD), there are lots of thrills and chills on the screen, especially during the climax. The film was shot in India over the span of a year. Much of the destructible environments were overseen and coordinated by Sadamasa Arikawa, a Japanese special effects titan who had worked under the great Eiji Tsuburaya, the co-creator of Godzilla and the father of Ultraman. The suit of the giant ape was made from real human hair--reportedly from the contributions of 300 donors. Near the end of the film when all-out destruction begins, the movie's effects are simply breathtaking. In a climactic shot, the suit itself was set aflame while the effects artist Keizō Murase himself performed a falling scene when the stuntman refused to appear in the dangerous shot. It's all very impressive. No wonder Quentin Tarantino is such a fan; this movie is one of only two Hong Kong films that he released through his Rolling Thunder distribution company in the late 1990s.

The Mighty Peking Man doesn't seem to have made much of an impact on the box office in any market in which it was released, including the USA when it finally played theaters during 1980 under the title Goliathon. Still, it's not so easily dismissed. The unique Hong Kong elements of the story make it unique and there's simply no denying the appeal of Evelyne Kraft as a blue-eyed beauty. She plays her character so completely free of malice that you can't help but feel just as bad for her as you do for the big gorilla. Even with all the things here that don't necessarily work--a mechanical mask, the fact that the behemoth is clearly a guy in a suit standing on a miniature set, even the goofy, disarmingly-sincere music montage in which Danny Lee and Evelyne Kraft eat fruit, cavort with dangerous animals, and make lots of love--the earnestness goes a long way to making us care about the characters themselves.

The film is presented in HD as part of Arrow Video's recent Shawscope Volume One box set from Arrow and is notable for several reasons. First, it's one of the few films in the collection that actually takes place in modern day (1977) and is not a period film. Second, it's the only movie included in the set that isn't a martial arts film. Shaw Brothers certainly made quite a name for themselves with their kung fu spectacles, but they also produced other kinds of films as well. It's good to see this aspect of their cannon being represented on home media. It should be noted that the HD scan for the film is not new and was produced by Celestial Pictures (the owners of the Shaw Brothers catalog) somewhere between 2003 and 2007. Mono Mandarin and English audio tracks are included, as well as newly-translated English subtitles.

The Blu-ray itself is loaded with content. A wonderful commentary from Travis Crawford battles against the notion that this movie is campy, begging viewers to approach it with the same sincerity that the film itself displays, eschewing the irony of the MST3K approach in which the viewer watches with a distance of superiority. Preach, brother Crawford. Three interviews are included: a new 19-minute interview with the suit designer Keizō Murase, a 24-minute conversation with Ho Meng-hua from 2003 filmed by Frédéric Ambroisine, and a 7-minute interview with actor Ku Feng, also from 2003. Nearly 30 minutes of behind-the-scenes Super 8 footage is here, as well as a 90-minute SD "unrestored" version that purports to be closer to the film's original theatrical presentation. The Alternate Goliathon U.S. opening theatrical and television credits are included, as well as Hong Kong, U.S., Dutch, and German theatrical trailers.

Those coming to The Mighty Peking Man looking only for a silly good time are certain to find it, but those with a more open mind may find themselves surprised at how much genuine sweetness and innocence is actually here. In some ways, that sweetness may actually undercut the cynical origins of the movie itself, which exists only to capitalize on the success of Paramount's Kong Kong remake. One thing is for sure: there really is nothing else quite like The Mighty Peking Man.