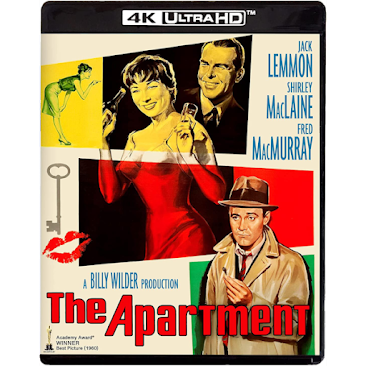 It's a rare and beautiful thing when a movie transcends genre and defies classification, succeeding so completely at the perfection that is often pursued by filmmakers, but rarely achieved. For me, Billy Wilder's The Apartment (1960) is flawless. I also realize that my unvarnished praise may well be setting the bar of expectation too high for those who haven't yet seen the movie, and reviews can be a dangerous thing; after all, the goal is to tell just enough to pique the reader's interest without changing their experience. But I can't maintain a cool, casual distance from this movie. I adore The Apartment.

Every character in the story is so human. The 1950s had ushered in a new level of nuance and honesty to filmmaking as Hollywood continued to struggle against the chains of the Production Code to tell real stories that audiences could relate to. 1960 is--in many ways--the last year of the 1950s, though the fifties dream of idealism would continue briefly until the assassination of Kennedy. This movie does feel like a final exclamation point in the letter that Hollywood had been writing all throughout the decade.

The Apartment is a story that could not have been told earlier, and it's still a little surprising that it was allowed on screens when it was. The plot concerns a good-hearted man named C.C. Baxter (Jack Lemmon) who lives alone in New York City. He works for an insurance company and makes enough money to afford a great little place in the city, but he's a pushover. When male co-workers find out about his apartment, they begin to ask to borrow his key so they can take their sexual conquests to this discreet location, far from the eyes of their wives, families, and neighbors. Lemmon can't say no, and when we first meet him, his apartment is booked up nearly every night of the week. He spends a few extra hours at work each night to pass the time until he can go home and enjoy a TV dinner in front of the television. What he really wants to do is ask the sweet elevator operator Fran Kubelik (played by Shirley MacLaine) out on a date, but he's not quite that bold and she's got some secrets of her own.

It doesn't take long for things to escalate. The company's head honcho, Mr. Sheldrake ( played by the ever-versatile Fred MacMurray), finds out about the apartment and manipulates Baxter into doing favors for him in exchange for a nicer office and more money. C.C. Baxter is working his way up the corporate ladder, one favor at a time, but these three separate lives are about to intersect and nothing will be the same again.

Billy Wilder was a master filmmaker and steers this film adeptly through comedy, tragedy, romance, and even melodrama as easily as a Formula 1 race car driver steers his machine. Wilder is one of our greatest filmmakers, having written and helmed some of the greatest films of the 20th century: Double Indemnity, Sunset Blvd., and Some Like It Hot, among others. The Tony Curtis and Jack Lemmon connection in Some Like It Hot is an important one; in his autobiography, Tony Curtis claims that his own indiscretions at an apartment high above Hollywood were the source for this story that featured his co-star Lemmon, though Wilder has credited David Lean's movie Brief Encounter with giving him the idea. Maybe Tony Curtis had a guilty conscience, or maybe this adulterous behavior was so common at the time that it was the perfect subject for a film. Maybe this film exists because nobody could ignore what was happening any longer.

For me, this movie is perfect. I wouldn't change a single shot or line of dialogue. At 125 minutes, it's just the right length to really dig into these characters, who are so heartbreakingly broken. Everyone is flawed here, but those flaws are so relatable. Jack Lemmon plays C.C. Baxter with good nature, but also profound loneliness. He's not a bad guy, even though he's helping people do bad things. Shirley MacLaine is smart enough to see that she keeps making bad decisions in her love life, but she seems powerless to break the cycle. Even Fred MacMurray, though he represents corporate selfishness, brings multiple dimensions to his character who, on paper, reads as a shark that everyone should have the good sense to steer clear of. The power of the screenplay, co-written by I.A.L. Diamond, and the gorgeous cinematography by Joseph LaShelle, makes this film both unforgettable and irresistible. It won five Academy Awards--Best Picture, Best Director, Best Screenplay, Best Art Direction, Best Editing--and continues to echo through our culture in shows like Mad Men.

Because it's such an important movie, the film has been well represented on home media. Previously, Arrow Video had used a 4K restoration for their Blu-ray release, but now Kino Lorber has issued the film on 4K UHD in its native resolution to stunning results. The black and white image is sharp, contrast is excellent, and the clarity is incredible. The grain structure is beautiful and balanced. Frankly, the film looks like it was shot recently and not over 60 years ago. One of the continuing joys for me in watching older films on the 4K format is how much age and distance the restorations remove from the image. Film is a time machine, and the details of 1960--typewriters, magazines, the covers of record albums--are crystal clear. This is, simply put, the best this movie has looked on home media, and I can't imagine it could ever look better.

The new Kino Lorber package includes the 4K disc (100 GB) of the feature film with an audio commentary by Joseph McBride, the author of the recent book Billy Wilder: Dancing on the Edge. A second commentary is presented by film historian Bruce Block. The Blu-ray disc that's included here (50 GB) presents the film in 1080p and includes those two commentaries plus a 30-minute vintage "making of" documentary and a 13-minute archival spotlight on Jack Lemmon. The trailer is also included.

I watch a lot of movies. I love film and the way that it allows creators to tell stories, and I love how different creators tell those stories in unique ways, leaving their own particular fingerprints on their work. But sometimes--not often--I watch a film that reminds me how rarely a movie achieves that magical, perfect balance of story, acting, and cinematography. For me, The Apartment is the realization of all of the potential within the medium. It's a deeply-human experience, but it's also charming and funny and ultimately very relatable. Billy Wilder makes filmmaking seem so easy and effortless, but The Apartment is the work of a master.