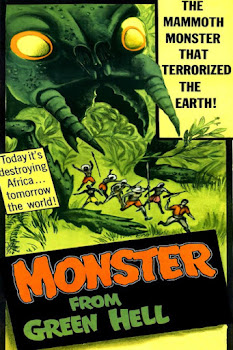 In his essay that's included with the new Blu-ray for 1957's Monster from Green Hell, Don Stradley asks "Would the hardworking souls who made B movies back in the 1950s believe we'd still be discussing their work 70 years later?" It's a reasonable question: these movies were made on the cheap and were never intended to be anything more than disposable entertainment, created for quick thrills and the hopes of making a couple of bucks so the filmmakers could do it again.

But something happened that these entrepreneurs never could have predicted: we fell in love with their movies. We didn't fall in love with them because they were slick and polished, we fell in love with them because they were rough and raw. They featured actors that didn't feel like gleaming stars of Tinsel Town, but real people. The films offer unabashed spectacle, or the dime-store equivalent thereof. We love these movies because we can see the fingerprints of the creators who made them--flaws and all--and they ask nothing more than for us to have a good time with them for 70 minutes. The people that created these movies, who Stradley accurately describes as "greats, near greats, and ingrates," inadvertently and accidentally created lasting entertainment that we still appreciate today--not because the movies are so perfect, but because they're not. 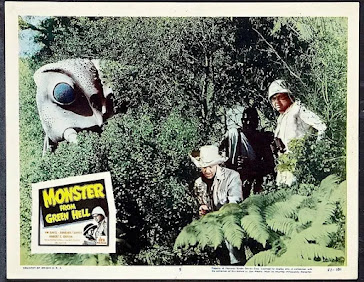 Monster from Green Hell is one part jungle movie, one part giant bug creature feature. The story in a nutshell: Two scientists, played by Jim Davis and Robert Griffin, are studying the effects of radiation and its capacity to cause mutations. When they hear about an African village being terrorized by what are essentially giant wasps, they mount an expedition through the harsh landscapes in an attempt to reach this inferno verde so they can study the creatures. Hunted by hostile natives and threatened by dehydration, this scientific quest may cost them their lives.

Like so many of its brethren, its a charming little movie that's well acted, lightning-paced, and features lots of spectacle, especially considering the low budget. The wasp creatures are achieved through a mix of practical, life-size models and a series of stop-motion animation shots that were created with cut-rate, rudimentary puppets. The action scenes are impressive and feature a cast of hundreds as angry tribesmen chase our protagonists across the savanna, which is set ablaze to slow the chase. This dramatic and extraordinary footage is actually taken from the 1939 RKO film Stanley and Livingstone. The keen producers (including Al Zimbalist--Robot Monster, anyone?) built much of their movie around this stock footage and costumed their actors to perfectly match the shots that were filmed nearly two decades prior. The result is magnificent. Location filming was not conducted in Africa; it was actually done in Bronson Caves, part of Griffith Park that fans of the 1966 Batman television series know so well as the Batcave, not to mention numerous other film and TV uses. This didn't stop our carnival-huckster promoters from issuing a completely fabricated press release for the film that cites the use of thousands of extras and the real threat from a hostile Ugandan tribe. Balderdash, all of it, but it makes for great hype.

Monster from Green Hell is the kind of movie that I love to champion. It features solid and charismatic performances from its cast, particularly Jim Davis, whose weather-worn face would become familiar to western fans and TV aficionados over the coming decades. It also features a cool creature that shouldn't work on film, given the very limited budget constraints of this production. The success of the movie is owed to a team of very talented people which includes an Academy-Award-winning production designer, stellar sound design and score, and a solid screenplay that plays to the production's strengths while minimizing its limitations. Notably, the film was directed by Kenneth Crane, who had primarily been an editor. It makes sense, given the amount of stock footage that makes up this film. 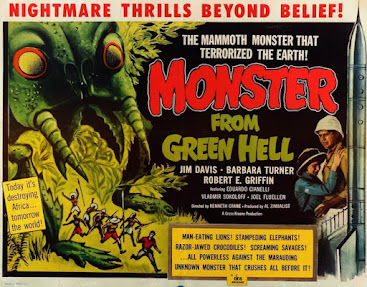 Now I get to champion not only the film, but also a gorgeous new Blu-ray from the fine folks at The Film Detective, a label and distributor that has become one of my favorites in the last year or two. Once again, we have a movie that has been reclaimed from obscurity and given a loving restoration to its filmic origins, but this new presentation features the added benefit of actually being complete: Monster from Green Hell is a black and white film, but it originally featured a color climax when it played in theaters. That finale had been lost over the decades, but now it can be seen once again, restored to its rightful place at the end of this sci-fi chiller. The movie, licensed from The Wade Williams Collection, is also available in either a 1.85:1 widescreen version or a 1.33:1 full screen presentation.

As expected from every Special Edition from The Film Detective, the Blu-ray is absolutely loaded with features. Artist/writer/film historian Stephen R. Bissette contributes a fact-laden audio commentary that is crackling with personality, information, and his affection for this genre of movie. He loves this movie and his passion is infectious. Elsewhere, C. Courtney Joyner steers us through the career of Jim Davis, taking us from his early studio work to his time in the indies at Republic, and then finally through his character parts in popular studio pictures and his last stop at the hit TV series Dallas. That feature--from Daniel Griffith and the always-excellent Ballyhoo Motion Pictures--is equally riveting and will likely have you scribbling down the names of movies you haven't yet seen, just as I do every time Mr. Joyner takes us on another movie safari. Finally, the aforementioned essay by Don Stradley, The Men Behind the Monsters, is an affectionate indispensable look at the crafty creators who brought this movie, as well as other B monster movies, to life.

These are charming times indeed when a film like Monster from Green Hell gets such a lavish restoration and special edition package, and The Film Detective has given monster kids another must-have addition to their shelves. Those who love these movies know that the stories behind the creation of the film are as interesting--sometimes more so--than the films themselves, and the special features included here do not disappoint. This is a disc I'll be returning to over and over again. Better pack some extra bug spray, it's a jungle out there.