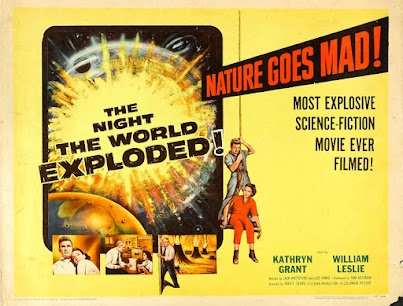 It must have been tough trying to come up with unique horror and sci-fi movie titles during the 1950s. You've got Day the World Ended, The Day the Sky Exploded, The Day the Earth Stood Still, just to name a few. For his 1957 disaster movie about combustible geological formations, legendary schlock producer Sam Katzman aptly settled on The Night The World Exploded.

In the film, Dr. David Conway (William Leslie, Buchanan Rides Alone, The Horse Soldiers) has created a machine that he believes can accurately predict earthquakes. The machine says that there's a massive seismic event coming in just 24 hours, so he sets out to investigate further. Accompanied by his colleague Laura "Hutch" Hutchinson (doe-eyed Kathryn Grant, The 7th Voyage of Sinbad), he descends into a cavern to explore the source of these readings and is shocked by his findings. Not only is the earthquake threat very real, but he's found the existence of a brand new periodic element: a form of rock that grows and then explodes when it's removed from water! His work leads him to believe that Mother Nature is sick and tired of having her natural resources stripped and has evolved to fight back. If this new element isn't studied and a plan put in place to immediately, the world faces certain destruction in one month's time! 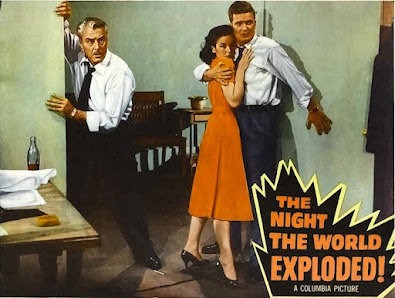 Given its fifties low-budget B-picture roots, The Night The World Exploded offers a fair share of entertainment value. There are plenty of explosions (most of which appear to come from archival military and newsreel footage) and a cool set that replicates the interior of a deep cave where we first discover the  geological anomaly. Outside of the stage work, real location filming was conducted at Carlsbad Caverns in New Mexico, ratcheting up the production value for this ultra-cheap thrill ride.  Katzman's movies always have a basic competency, and his reputation as one of the kings of exploitation was earned for a reason. This is not a teenage pic for the bobby socks set, but rather a thrill ride for adults that was fueled with paranoia of impending destruction; as with his Cold War Creatures films, mankind was a victim of its own hubris.

Katzman leaned on his workhorse director Fred F. Sears to bring this idea to the screen, and as always, Sears delivers a picture that moves briskly and packs a maximum amount of budget thrills into just 64 minutes. Shot during a two week stretch in November of 1956, the film was released by Columbia in June of 1957 on a double bill with another Katzman/Sears joint, The Giant Claw. Rather than hire an actor for the voiceover that accompanies the film, Sears himself provided the narration. A few months later, the director literally dropped dead at the age of 44, ending the fruitful--but no doubt stressful--string of B-movie wonders that Katzman and Fred F. Sears collaborated on together. (Sidebar: The Night the World Exploded may have debuted alongside The Giant Claw, but it also pairs well with another geological horror film, Universal's The Monolith Monsters, also from 1957 and co-conceived by Jack Arnold, the director of Creature from the Black Lagoon and The Incredible Shrinking Man.) 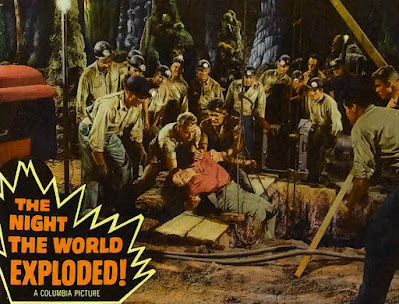 Occasionally, people lament that The Night The World Exploded is such a low-budgeted affair. What would the movie have looked like if Katzman had hundreds of thousands of dollars--or even millions--to throw at his end-of-the-world disaster flick? For me, the limited nature of the film is why I like it. One of the biggest appeals of B-movies and exploitation cinema is seeing what people can accomplish with few resources but lots of ideas. It's rare that a project like this one would get a shooting schedule for more than 7-14 days or would exceed $100,000 to spend on actors, locations, film stock, editing costs, and sometimes print and advertising too. Yet, look at what comes from those circumstances: we have hundreds of cheap movies from this glorious era of the 1950s, when profiteering producers and hungry creators realized they could draw people out of their homes and away from their television sets by marketing basic crowd-pleasing stories at bargain-basement prices. Is it any wonder that new audiences are still discovering and enjoying (even if ironically) these fifties budget programmers, well over a half-century after they were first hastily shot, edited, and sent to neighborhood theaters? We respond to the human element, and that's the one thing computer special effects and bloated budgets can't replace. 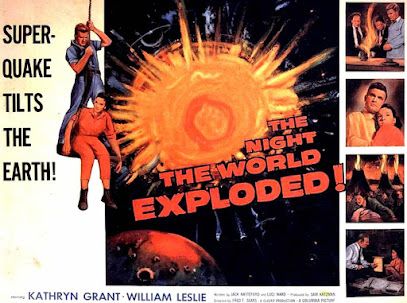 Currently, The Night the World Exploded is still awaiting the deluxe HD presentation that some of his other films have enjoyed, but a very nice print of the movie is currently available on the value-priced Vintage Sci-Fi 6-Movie Collection from Mill Creek Entertainment, which is also the only available licensed source for other Columbia rarities from the Sony vaults including The 27th Day, 12 to the Moon, and Valley of the Dragons.