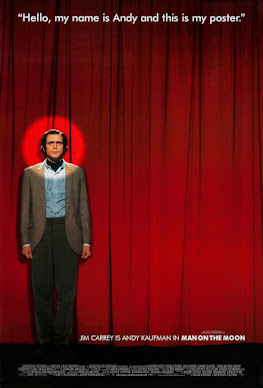 I'm not a fan of most biopics. Movie stars put on wigs and prosthetics and cosplay as some of the most famous and recognizable personalities in history while awards organizations say "ooh" and "aah." At best, they remind us of the greatness of their subjects, or serve as a gateway to the better, more genuine article; more often than not, they lack humility and miss the point. They represent the pinnacle of artifice and pomposity, and the term "standing on the shoulders of giants" is perhaps never more applicable than in the case of the biopic, where an actor pretends to be a great musician or movie star or historical figure, mimicking the thing that we love about the original subject and often being hailed as "brave" for echoing someone else's life for two or three hours. Biopics also often change history to suit their storytelling needs, thus failing to meet what should be their singular goal: to bring the reality of the past to life for new audiences. How can you do this if you've changed the truth?

No, I don't like most biopics. But I love Man on the Moon.

How can this be? After all, Man on the Moon is a biopic by very definition. Milos Forman's 1999 movie tells the story of comedian/performance artist/practical joker/iconoclast Andy Kaufman by recreating established history. Its star, Jim Carrey, disappeared completely into the controversial "method" form of acting, becoming Andy Kaufman so successfully that members of the real Kaufman family would come to him for a glimpse of their deceased relative. Andy's daughter--who had no relationship with her father--spent an hour talking to Jim Carrey as Kaufman on the set, trying to establish a relationship they never had. On set, Carrey was either Andy or Andy's darker alter ego, Tony Clifton, for the duration of the shoot. Cast and crew were exasperated and disturbed, and director Forman--no stranger to strong-willed actors as evidenced by his time on One Flew Over the Cukoo's Nest and Amadeus, found the project overwhelming and difficult because he cast Jim Carrey but got Andy and Tony. If I dislike biopics for their pretension, then what makes Man on the Moon special?

The answer is "subversion." Within the first few moments of Man on the Moon, Jim Carrey (doing Andy Kaufman, who is doing the "foreign man" character) looks at the audience and tells us that the movie isn't very good. It gets things wrong, it moves events around, and it serves its own purposes. Terrible! We're free to go, and the credits roll. The screen fades to black. Then Carrey returns, this time personifying another aspect of Andy Kaufman, the stand-up comedian persona.  He explains that he had to get rid of all the people who wouldn't understand, so he was performing a character. This is a character too, he explains! Within moments, this film has explained to us that biopics are artificial and not to be taken seriously because they aren't the truth. It's our entree to this story of a confounding man who lived a confounding life. Like layers of an onion, the film explores the question "who was Andy Kaufman?"

In form, Man on the Moon taps into the spirit of Kaufman's playful anarchy by being anarchic itself, which is also a factor in its success. It doesn't deify Andy Kaufman. It doesn't make him a martyr or a saint. In the film, as in life, he's a divisive figure who rubbed almost everyone the wrong way, including his own family members. A founding father of the "cringe" style of comedy, he would bomb on purpose just to anger his audience. After success on television via the hit sitcom Taxi, he continued to dodge expectations, napping in sleeping bags on stage and reading from classic literature. The movie avoids being any particular thing. It plays tricks on us, too. If it sometimes feels a bit traditional, those are the Hollywood trappings of a major Hollywood motion picture, but it does all it can to shake free of them. 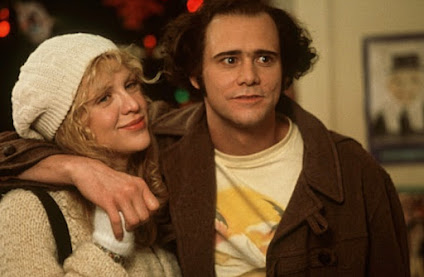 In another weird (but wonderful) subversion of truth, real people from Andy's life play other real people from his life. Producer/actor Danny DeVito, Kaufman's Taxi co-star, plays his real-life manager George Shapiro. George Shapiro himself plays someone else in the movie. Bob Zmuda, Kaufman's co-conspirator and the second person beneath the Tony Clifton makeup, plays someone else in the movie while Paul Giamatti plays him. Most of the cast of Taxi reprise their roles in an accurate recreation of the TV show's set nearly fifteen years after the show went off the air. Also appearing in recreations of real interactions are David Letterman, Richard Belzer, Jerry Lawler, and the most bizarre credit, Howdy Doody. There's also a really lovely turn from Courtney Love as Kaufman's girlfriend Lynn. In the essential Netflix documentary Jim and Andy (2017), the real Lynn Margulies states that Love captures who she was at that time. It's another example of the thin line between art and life being torn down and something weird but wonderful happening as a result.

Because the filmmakers worked closely with Bob Zmuda (who is credited as co-executive producer and was constantly on the film set), the story has the feeling of authenticity, but also the spirit of confusion and chaos that Kaufman carried with him wherever he went. Because of Zmuda's involvement and Jim Carrey's commitment to making this an authentic experience, it often feels like the antithesis of traditional self-important and self-congratulatory biographical pictures. By all accounts from everyone who was there, Andy Kaufman returned from his early grave to oversee this production. The director acknowledges it, the actors who knew Andy acknowledge it, and even Andy's family acknowledge it. Somehow, against all odds, the spirit of Kaufman lives on through Man on the Moon. It's something of a miracle that the project was greenlit in the first place; Carrey was the biggest comedy star in the world and this movie is anything but a safe bet for mainstream audiences. On the contrary, it was an ambitious and expensive (some reports have the budget at over $80 million) risk. 1999 was a great year for movies, and it was also a time when studios were still taking chances on greatness, but there's a lesson to be learned as well: the movie was a financial failure, earning just over half of its budget back. It also ended a years-long string of Jim Carrey hits at the box office, though accolades and a Golden Globe for Carrey may have eased some of the pain. As much as I champion this movie for being different, it's box office failure is one of the reasons we don't see major studios taking chances at the movies anymore. The film isn't for everyone, which is why I love it, but the lesson to the studios couldn't have been more clear: don't gamble on projects that don't have clear box office value.

Now Man on the Moon arrives on Blu-ray from Kino Lorber some 15 years into the format's existence. It's a fine presentation across the board, with a gorgeous, brand new 2K scan that was supervised by the film's cinematographer. It includes an audio commentary by the screenwriters Scott Alexander and Larry Karaszewski, moderated by film historian Howard S. Berger. The package also contains This Might Be A Story..., which is a series of audio recordings between the screenwriters and director Milos Forman made during the creation of the film. These tapes offer a fly-on-the-wall perspective on the unique challenges and approach by the filmmakers. Spotlight on Location is an EPK feature carried over from the 2000 DVD, alongside other ported special features that include deleted scenes and the music videos for two R.E.M. songs from the film, Man on the Moon and The Great Beyond. The trailer is also included. 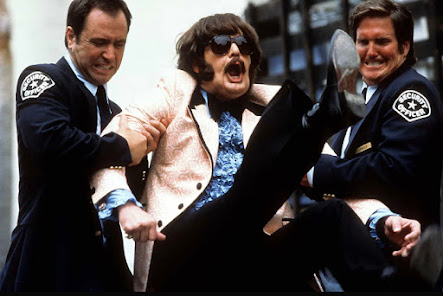 Andy, did you hear about this one? Almost forty years after you left us and over twenty years after this big Hollywood production, people are still discovering your work and being challenged by your persona. They want to know who you really were, as if anyone ever could. Can't they see how funny the idea of celebrity is? Wealth, too. People want to put you in a box and pin you down. They want to be in on the joke, they want to feel safe and superior. They want to know where the gags ended and you began, but they don't realize that there was no line, it was always you, and also it was never you. All those years on Taxi, the comedy specials, the live TV appearances, the wrestling matches, that was all a joke, don't they get it? Even the awards and the critical praise for Jim Carrey, pretending to be you...does it all make the joke even funnier? I can't help but think that wherever you are, you're laughing harder than anyone.