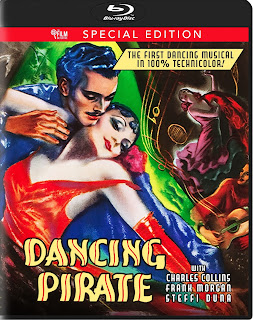 The Film Detective waves their magic wand over another fascinating piece of cinema history to bring new life to Dancing Pirate, a 1936 musical adventure shot in color and with a new star at the forefront.

This mid-thirties curiosity seeks to answer the questions that keep us up at night: what if a well-to-do 19th century dance instructor were kidnapped and put into service aboard a pirate ship? Avast, me hearties, ye need wonder no more. For 83 pleasant minutes, Dancing Pirate delivers light swashbuckling thrills and well-choreographed dancing spills in a enjoyable (if forgettable) tale that is more remembered for its technical achievements and supporting cast than for being a box office or critical success. 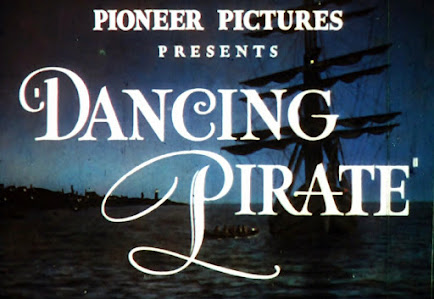 Actor, dancer, and stage-star Charles Collins makes his feature debut as the lead in this film from the aptly-titled Pioneer Pictures, an independent production house with a focus on color cinema in a time when audiences seemed indifferent to a move away from standard black and white cinematography. Collins is a likable enough lead and has a debonair look, complete with pencil-thin mustache, but he lacks on-screen presence. The film finds him being clubbed over the head as he leaves his Boston dance studio, only to awaken aboard a ship at sea with the Jolly Roger flying high. The ship travels to the coast of Spanish-occupied California where our footloose figure legs it to freedom, only to be captured by locals who plan to hang him for piracy. His one weapon is the rhythm in his feet, but with corrupt authorities and certain death encroaching from all sides, can he clear his name and live to dance another day? The film is perfectly fine, even enjoyable. The dance numbers are cute, the romance is adequate, and there's a sword fight finale that serves to further round out the entertainment, but the lack of star power and the stage-bound setting are both definite hindrances.

The supporting cast lives up to their function and props up the shortcomings of the film's lead, with a huge chunk of the heavy lifting going to Frank Morgan, a delightful actor that everyone will recognize if not by name, then by his greatest and most famous screen role: the titular Wizard of Oz. Fans of that fantasy classic will well know Morgan's unique flustered delivery as Professor Marvel, the doorman, the guard, the carriage driver, and the gate keeper of that Emerald City in the sky. He's a delight here, bringing some much-needed levity and mastery to the film as Don Emilio Perena, the local authority. Hungarian-born Steffi Duna plays his daughter and the object of our dancer's affections. Prolific character actor Luis Alberni has a notable role, and an uncredited Rita Hayworth appears as one of the film's background dancers. The movie was directed by Lloyd Corrigan, who would depart from his duties as a screenwriter and director one year later in 1937 in favor of a career in acting, which he would continue to do for another thirty years. 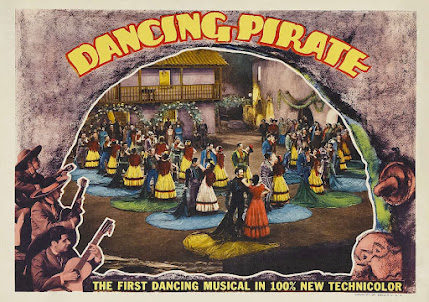 The 1936 poster for the film hails it as "The first dancing musical in 100% Technicolor!" Indeed, the new three-strip Technicolor process--an expensive, cumbersome method that used three individual pieces of film to replicate the colors blue, red, and green--makes its musical feature-length debut here, offering something audiences had literally never seen before. Predating later thirties (and more successful) movies like Gone with the Wind, the novelty of color was not always welcome at the box office. In the special features produced for this disc by Ballyhoo Motion Pictures, David Pierce recounts how both the actors and the public were dubious of movies in color during the 1920s and 1930s. Several stars, perhaps most notably Bette Davis, thought they looked better in black and white and resisted the pressures of color photography as long as possible. Similarly, color film didn't seem to be a box office draw for most paying customers, who were happy with monochrome.

Given all of these factors--lack of a powerful male lead, middling production values, disinterested public--Dancing Pirate is not well remembered...or remembered much at all. Upon its release, it didn't make a splash, and Pioneer Pictures was merged into Selznick International Pictures in 1937, with the company disappearing altogether not long after. The new Blu-ray marks the first time that many people are seeing--or even learning about--this forgotten part of cinema history. Part of this is because until very recently, the original three-strip color version of the film was completely lost and the movie only survived in incomplete prints and two-strip 16mm footage that floated around in the public domain. All that changed in 2015 when a complete 35mm nitrate print was discovered. Now, thanks to The Film Detective, we can see the movie in high definition and once again complete, just as it played on screens in 1936. The new Blu-ray is remarkable, but should be approached with reasonable expectations given the nature of this restoration from deteriorating source elements believed to be entirely lost until just a few years ago. There are dropped frames throughout, no doubt related to the age and condition of the nitrate itself, but they don't interrupt the flow of the movie. Frankly, it's remarkable that the film looks so good.

The tone of the new Blu-ray is one of discovery and assessment. Nobody is proclaiming Dancing Pirate to be a lost classic, but rather a curiosity worth studying, and The Film Detective's wonderful line of Special Edition Blu-rays always excel at film scholarship. An audio commentary is provided by Jennifer Churchill, who also contributes a written essay on the failure of Charles Collins to translate a successful stage career into big-screen fame. She remarks on the fickle nature of motion picture audiences and the system itself, ultimately casting a sympathetic light on Collins. Churchill's tone is one that I heartily agree with and appreciate; her opening statement reminds us that classic film fans live in a constant state of discovery. For each of the beloved films that are praised and beloved, there are more movies that have been totally forgotten, waiting to be discovered. Whether they are classics themselves or not is beside the point: they deserve to be seen.

The aforementioned Ballyhoo feature Glorious Pioneers: The Birth of Technicolor is an educational look at the history of early color filming techniques during the 1920s and 1930s with author/historian David Pierce. Ambushed By Mediocrity: Remembering The Dancing Pirate features a conversation with film producer/historian Michael Schlesinger, who provides something of a post-mortem on the film that never comes across as superior or judgmental. As always, Ballyhoo Motion Pictures documentaries are professional and educational, never ironic or biting, which is appreciated.

Dancing Pirate is a collector's curiosity, and I'm certainly grateful that it's been restored so that we can see it as it was meant to be viewed.  For cinephiles, another piece of the puzzle that makes up The Golden Age of Hollywood has been recovered and returned to its rightful place as The Film Detective continues to live up to its name and goal of uncovering and restoring lost cinema history.