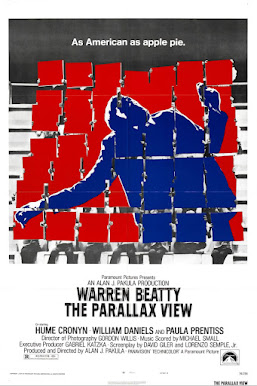 Created at the pinnacle of the political paranoia thriller trend, 1974's The Parallax View is one of many tales to confide that we are being watched, controlled, and manipulated by shadowy forces. Such paranoia has been around for ages, but it seems to have reached a fever pitch during the seventies against the backdrop of Watergate and a total erosion of faith with our leaders, coupled with a sense of dread as faceless corporations achieved more power than anyone had previously imagined.

The Parallax View stars Warren Beatty (Dick Tracy) as a reporter and a former-alcoholic who is one of the witnesses of a political assassination. Three years after the murder, six of those witnesses have turned up dead: from Beatty's cynical and disinterested perspective, the deaths are easily explained: heart attacks, accidents, nothing suspicious. But when his friend (Paula Prentiss) believes she's uncovered a conspiracy and then herself ends up dead, Beatty can't deny that his own life is in danger.

What follows is a surreal, sometimes-murky descent into the secret world of assassins, brain-washing, and isolation as Beatty goes off the grid in an attempt to infiltrate an organization known as "The Parallax Corporation," which specializes in human engineering, aka making assassins out of society's outcasts. Posing as one of these troubled outsiders, Beatty seeks to uncover a truth that may cost him everything.

The film is based on a 1970 novel of the same name, which was a fictionalized account of the events surrounding the John F. Kennedy assassination; for the movie version, Kennedy has been replaced by an entirely fabricated political figure, though keen-eyed viewers will see true-crime inspirations. The movie isn't pushing any particular agenda and is instead saying that it's the entire system that's out to get us, not one party. None of us are safe, and if you find out too much or see something you shouldn't, you'll be eliminated too.

In an era absolutely chock-a-block with similar paranoid thrillers (Marathon Man, 3 Days of the Condor, The Conversation, The China Syndrome, Capricorn One, even Soylent Green), The Parallax View needs to stand apart from the pack, which it manages to do in a couple of ways. First, Beatty gives a detached performance, never raising his voice, showing visible fear, or losing his composure. It's a very understated approach (the same laconic approach he takes in everything from Shampoo to Bugsy) and makes his casting a very interesting choice. He's an outsider from the moment we meet him, and only becomes more of one as the film progresses. He's pretty, almost feminine, but tough too, as evidenced by a brutal bar fight that he not only walks away from, but wins, though he manages to do it without raising his voice.

Mirroring this sense of calm detachment, director Alan J. Pakula strikes a tone that can best be described as fatalistic. There is very little in the way of conventional cinematic urgency in the movie. No car chases, no panicked escapes down crowded city streets or dark alleyways with enemies in hot pursuit. The score is not bombastic. Most of the action is filmed from a far distance, such as a scene where Beatty fishes in a river with a massive, gushing dam in the background, with the human element entirely dwarfed by the forces of nature itself. Again, during the climax of the film, the action takes place far from the camera, so distant that we can barely see what's going on. We are small. Insignificant. The machinations of the forces that control us are too big to see, let alone fight.

Seventies movies of this ilk are often cast to the nines, and The Parallax View is no exception, with great performances from a host of talented actors. In addition to Beatty and Paula Prentiss, the film also stars William Daniels (The Graduate, the voice of K.I.T.T. on Knight Rider, Mr. Feeny from Boy Meets World), Hume Cronyn (Cocoon) as Beatty's newspaper editor in chief, Kenneth Mars (The Producers, Young Frankenstein), and Bill McKinney (Deliverance) in a virtually-silent role that is as chilling as anything the actor ever committed to film.

Movie buffs have a couple of options for The Parallax View: The Criterion Collection released the film in early 2021, and Australia's Imprint Films released a region-free Blu-ray in December of the same year. My source for this review was the Imprint release, which is sourced from the same 4K restoration that Criterion utilized, but which contains completely unique special features that include two new audio commentaries: one from film historian Kevin Lyons, and other from film critic/podcast producer Blake Howard. A new interview with Kim Newman runs over 20 minutes and traces the roots of the paranoid thriller through the 20th century, with some interesting conclusions about why paranoid thrillers have declined in our current movie climate, despite our paranoia arguably never being higher. There's also a lengthy interview with British film historian Matthew Sweet and a video essay by Chris O'Neill.

I like The Parallax View. I appreciate the minimalist take, as this movie isn't interested in spectacle (though that's there in small quantity, such as a fight on the roof of Seattle's Space Needle) and chooses instead to go inward, focusing on Beatty's awakening to a larger conspiracy. After all, if these organizations operate from the shadows, nobody sees them coming. Death comes silently and without warning, rarely head on. All this in well under two hours, too, showing a smart use of the running time and clever editing that moves things along briskly and helps to create a dreamlike, slanted reality in which the narrative doesn't quite play by the established rules. Clearly one of the inspirations on later successes like The X-Files and even 1997's The Game, The Parallax View was not overly appreciated upon its release, but seems to find new fans as it ages and even its wildest suppositions now start to feel tame compared to the internet-based reality we find ourselves in today.