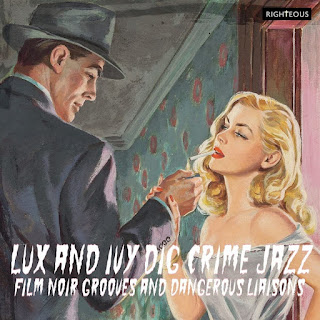 The latest entry in the "Luxy and Ivy" compilation album series from Cherry Red Records presents 21 cool, smokey tracks associated with the world of film noir--specifically, the pinnacle of the movement from the 1950s. It was during this latter era of the noir cycle that we draw so many of the stereotypes that we have about noir: the sultry saxophones, the mellow resonance of xylophones, even the bomp bomp bombast of brass, sounding an ominous alarm.

The soundtrack of noir didn't just exist on cinema screens, either, but also played out weekly on the glowing black and white televisions of millions of viewers, as programs like Johnny Staccato, Dragnet, and Peter Gunn brought the dangers of the night into the living room.

Those familiar with the connotations of the "Lux and Ivy" branding from this collection (Lux Interior and Poison Ivy were founding members of the The Cramps, a rock band with punk tendencies and a deep affection for fifties and sixties culture) will also know that this is not intended to be a convenient, nostalgic collection of jazzy noir tunes, but represents something more challenging. Every Lux and Ivy release feels as if it has been curated by "the cool kids" who have deep knowledge of retro culture, and this release is no exception.

Some of the biggest hits of the entire noir era are presented here: Henry Mancini is well represented with his theme for Touch of Evil (1958) and five cuts from the soundtrack of television's Peter Gunn (1958-1961), though--in traditional Lux and Ivy fashion--the Grammy-winning title track ("Peter Gunn" Theme) is not included. Too obvious, perhaps? Similarly, Elmer Bernstein has three tracks, comprising his work on 1959's The Man with the Golden Arm (starring Sinatra) and his work on television's Johnny Staccato, a single-season detective series that aired on television from 1959-1960.

It's the deeper cuts that will have music collectors and noir aficionados seeking out this collection, such as a 1950s Bobby Troup performance of "(Get Your Kicks On) Route 66," a song he wrote in the forties but that Nat King Cole made famous and would go on to be covered by everyone from Chuck Berry to the Rolling Stones. We have a version of "Harlem Nocturne," an anthem of noir if there ever was one, but it's not the version by The Viscounts; instead, we hear a 1959 rendition performed by Warren Barker, which I was unfamiliar with. There's a strange track from the 1957 film The Sweet Smell of Success, which seems to be an actual scene from the film with wall-to-wall dialogue from its stars. I can find no history of the track, and it seems possible that it's been taken from a YouTube clip I located online which has the exact same running time.

The most bizarre inclusion of all is a song called "Two Hour Honeymoon" by actor Paul Hampton. It's the B-side of the 1960 single "Creams" and was co-written by Burt Bacharach! It's sort of a spoken-word jazz jam in which a couple crashes their car after just being married. Our narrator has died in the crash, and he's telling his new wife (and new widow) not to forget him. This is all delivered in an affected, first-person performance that sounds like Vinny Barbarino with a head cold. Check out this strange musical melange here:

Other notable inclusions are Miles Davis' "A Quiet Gass" from the 1957 film Elevator to the Gallows, Andre Previn's "Like Blue" from The Subterraneans, Alex North's "Floozie" from 1955's The Rose Tattoo, and Frankie Ortega and Sy Oliver's "Lady in Distress" from the television series 77 Sunset Strip (1958-1964).

Lux and Ivy Dig Crime Jazz delivers precisely what it promises with lots of film noir grooves and more than a few deep cuts to appease the musicologists who don't have everything included here several times over. With liner notes written by Mojo Magazine and Kerrang! contributor Dave Henderson (who also compiled this collection), the disc becomes a tour through the dark alleys where noir and jazz met. This is not the pop-friendly commercial tour, either, but the more dangerous adventure that departs at midnight and skirts the docks and the riverside warehouses where you know you're being watched. The "Lux and Ivy" series is one of my favorite collections of music for precisely this reason: it's an invitation to a secret shindig that only a few know about and where things are guaranteed to get a little wild.