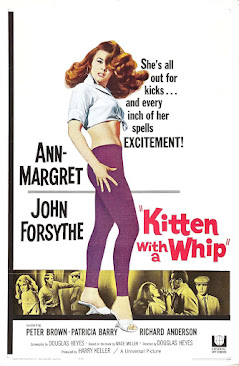 Hitting screens just months after a star-making splash in the Elvis vehicle Viva Las Vegas, 1964's Kitten with a Whip is a showcase for Ann-Margret. The Swedish-American actress had already been in State Fair and Bye Bye Birdie, establishing herself as an up-and-coming sensation for the teen set, but if her celebrity status was confirmed by her big-screen romp with Elvis, then Kitten with a Whip cemented her budding reputation as a sixties sex symbol.

In Kitten with a Whip, the actress plays Jody, an escaped reform school student who is literally on the run when we first meet her. Chased by guards, she manages to dodge her pursuers and escape to a suburban neighborhood where she ducks into a house, wanders into a child's room, and collapses into the empty bed. It's precisely then that the owner arrives: a political candidate named David (John Forsythe, TV's Bachelor Father, best remembered as the disembodied voice of Charles Townsend on Charlie's Angels..."Good morning, Angels!") who is preparing for a major campaign. His wife and daughter are away while he schemes the launch of his political career, and he's flummoxed when he discovers the attractive girl in his daughter's bed, yet reacts with kindness. Jody seems sweet as a lamb, and grateful for the help that Forsythe gives her, buying her clothes and even giving her some money to help her on her way. He doesn't want any trouble, and while he's clearly attracted to her, he never crosses any lines and wishes her a fond farewell. 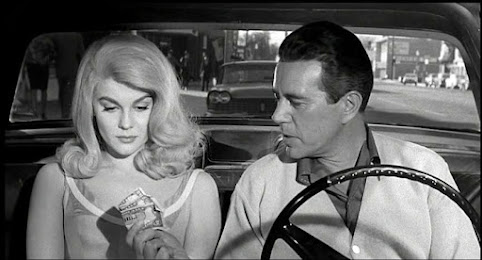 Later, at lunch with a friend played by Richard Anderson (Oscar Goldman from The Six Million Dollar Man), David sees a television broadcast announcing Jody as a person of interest that the authorities are seeking. Realizing that he's aided a fugitive, he returns home to find the young outlaw still occupying his house, and before long, the other shoe drops: the whole innocent victim gimmick was merely an act. Jody is a juvenile delinquent and she's willing to do anything and hurt anybody to get her way. She's unstable, switching between purring kitten (hence the title) and raging tiger the moment things don't go her way. She tells David that she's seventeen and if he so much as breathes a word about her to anybody, she's going to say that he abused her. David now finds his livelihood, his marriage, and his entire political career in jeopardy. 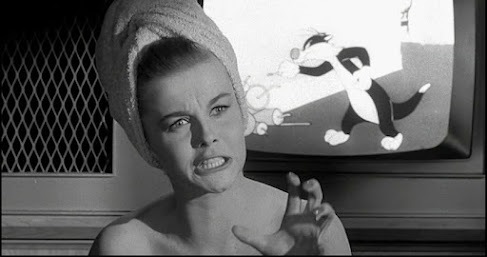 Kitten with a Whip is a fascinating movie that is uncomfortable to watch at times. The character of Jody is literally jailbait (thankfully, Ann-Margaret was actually in her twenties at the time) and the seductive Lolita aspects of the character are definitely played to full effect, as are the potential consequences for David as it becomes more and more clear that he faces complete ruination. The marketing for the movie exaggerated the outright sexiness of Ann-Margret in this film (for instance, we never see her in anything but a dress, though the posters depict her in much skimpier attire), but the actress is so good at playing the coquettish flirtations and then committing some egregious act of violence moments later. When Jody's hell-raising friends Ron (Peter Brown, Foxy Brown) and Buck (Skip Ward, The Night of the Iguana and future Hollywood producer) show up at the front door, things escalate even further. The back half of the movie moves the action to Tijuana and features a knife fight, a burlesque show, and a hot rod showdown. 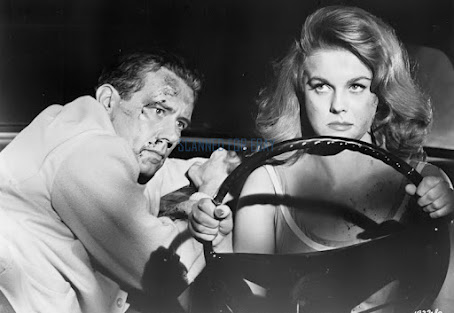 You couldn't ask for much more from a juvenile delinquent (JD) flick, and it really is a stellar example of the teensploitation sub-genre that was flooding theaters at the time. Kitten with a Whip can be seen as a bridge between the low budget "youth gone wild" films of the fifties (Hot Rod Girl, Teenage Doll) and the biker pictures of the late sixties (The Wild Angels, Chrome and Hot Leather). Since this is a Universal picture, the production is top notch and much more polished than similar movies that were also appearing at the same time from lower budget distributors.

The screenplay was written by the director, Douglas Heyes (primarily working behind the camera on television production) and a co-writing credit was given to "Whit Masterson," a screen name for authors Robert Allison Wade and H. Bill Miller, who wrote over two dozen pulpy paperbacks during the 1950s and 1960s under various names including "Wade Miller." Their novel Badge of Evil was adapted into the film Touch of Evil, widely regarded as the final entry in Hollywood's original film noir cycle. Most importantly for this review, however, they also wrote Kitten with a Whip as a novel in 1959. The novel was immediately optioned for film, and due to those hardboiled pulp and noir connections, the movie version of Kitten with a Whip does have a foot in the seedy world of lurid paperback entertainment that its creators navigated so adeptly. Consider this blurb, which was printed above the title on the original Fawcett Golde Medal paperback: "She had a child's mind in a lush woman's body and she reached for evil with both hands." 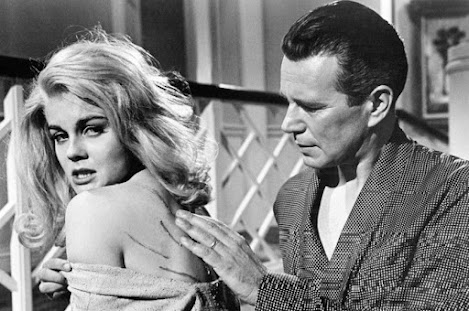 A couple of footnotes regarding the cast: the part of Jody was first offered to Nancy Kwan, who was fresh off the success of The World of Suzie Wong. Later, Brigitte Bardot would be offered the role before it ultimately went to Ann-Magret.  Also, the character's full name is "Jody Dvorak," and I wonder if this is a nod from the authors to Ann Dvorak, an actress from the Golden Age of Hollywood who was excelled at playing bad girls in 1932's Scarface and Three on a Match.

Kitten with a Whip has been misunderstood and underestimated for years. It received a lukewarm reception at the box office from the critics, who seemed to miss the entire point of a JD movie in the first place. This is an exploitation picture; sure, it's dressed up in a very respectable package, features some really wonderful actors, and was distributed by Universal, but the goals of a rebel youth movie are more primal than your typical studio fare. The ending is questionable, but then again, this is a product of a very rigid film system that was changing rapidly, yet still needed to serve a mass audience. In other words, it's a Universal picture, not a Corman film. The movie has achieved cult status over the years, especially from the hepcats who love JD films from this era, and it reached a whole new audience when Mystery Science Theater 3000 tackled it in 1994. I'm never sure if being a featured film on MST3K is a good thing or a bad thing, but the more of these movies I see in restored, complete (and snark-free) presentations, the more I lean toward the opinion that MST3K does no favors for any movie they set in their sights.  I always encourage film buffs to check out the flicks without jokes to see them as they really are, at least for a first viewing when possible. Kitten with a Whip is not a camp classic or a so-bad-it's-good groaner, it's a really solid noir-influenced nail-biter with a well established television leading man (John Forsythe) and a powerhouse performance from Ann-Margret. 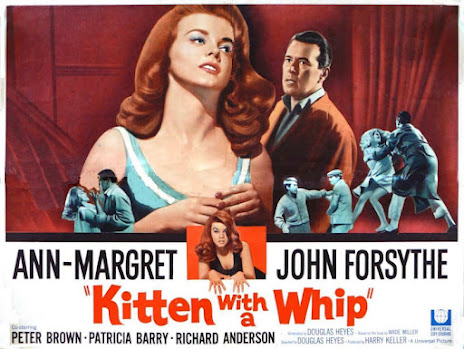 Now others can appreciate the film's merits thanks to a brand new region-free Blu-ray from Australia's Imprint Films that includes three exceptional new features. First, we have a brand new commentary from film critics Alexandra Heller-Nicholas and Josh Nelson. Next up is Faster, Pussycat! Kill! Kill! The Rise of Delinquent Girls in Film, a video essay by Kat Ellinger. Finally, we have She Reached for Evil: Dissecting Kitten With A Whip, a video essay by Andrew Nette on the pulp works of Wade Miller, the JD novel craze, and the rise of youth gone wild stories during this era. There's also a photo gallery and a limited edition slipcase with unique artwork for the first 2000 units. 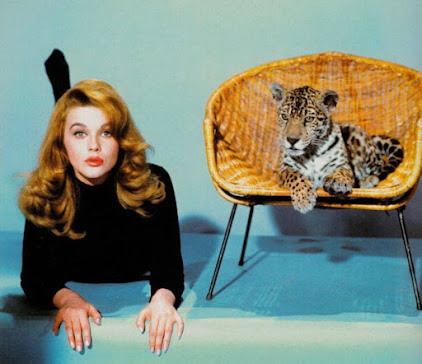 As I find myself saying more and more, whether a movie is traditionally "good" or "bad" is beside the point, and Kitten with a Whip is a perfect example of this. There are elements that work and there are elements that don't, but this simply isn't "that kind of a movie." It's a story that should be experienced, and it thrives on tension, desire, forbidden sexuality, and the same sense of looming dread that defines film noir. Ann-Margret would become one of the biggest sex symbols of the 1960s and beyond, but is in rare form here in a bold and brash movie that dared to venture into forbidden territory at a time when youth culture was clashing with the establishment. Kitten with a Whip translates that culture clash into a rousing, tense firecracker of a film that serves up youthful rebellion in a package that's polished enough to appeal to a general audience.