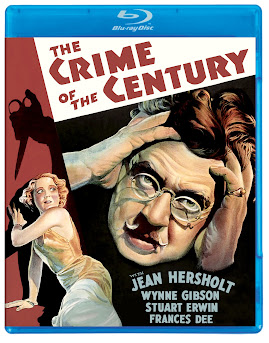 1933's The Crime of the Century requires suspension of belief. No, it's not a science fiction film with aliens from another planet, or an undersea adventure set in the hidden kingdom of a secret race of mer-people. It's not even a horror film, though it does share a few loving similarities with some of the chillers from the era. No, this film is a murder mystery that takes place primarily in a single location and features a list of suspects with their own motives and quirky character traits. Comparisons to Clue (both the movie and the board game) would not be unfounded. Yet, this movie takes place in the alternate dimension of film-land, requiring us to accept some pretty far-fetched elements that owe more to genre entertainment than Agatha Christie. Hey, it's like Knives Out!
Our main character, Dr. Emil Brandt (Jean Hersholt) is a "mentalist" and hypnotist who walks into a police station and confesses to a crime that he has not yet committed and that he doesn't want to commit. See, there's $100,000 in cash on the line, and he's not sure he can resist the temptations of the flesh. The police captain (Robert Elliott) accompanies him to his home and office where we meet the doctor's supportive and earnest daughter (Frances Dee) and his greedy and superficial wife (Wynne Gibson). More characters descend upon the house, including a brash-but-clever reporter (Stuart Erwin). The lights go out, there's a struggle, and before you know it, we've got a dead body, a missing $100K, and a growing list of suspects that includes the maid, the butler, more cops, and a suave, pencil-mustachioed gentleman. 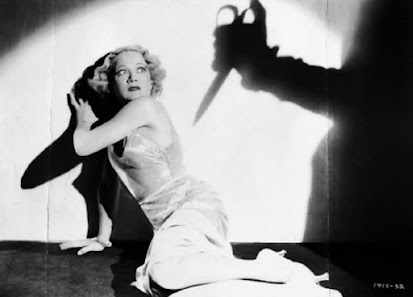 Sounds kind of familiar, doesn't it? This is the stuff of every campy murder mystery, but it's done in such a fun way that it's hard to resist. There are so many odd little character moments, like the maid arguing with the butler about how many servings of sauerkraut he ate ("Three," he says! "Four, because sauerkraut turns you into a swine" she replies!), or the way a murder victim stares wide-eyed at the ceiling after being killed. It's delightfully campy, and I think that's intentional, but hey, you never can tell. It's like an entire evening of dinner theater melodrama condensed into a tight 73 minutes. If you ever visited The Adventurer's Club at Disney's Pleasure Island, this one's for you.
Not convinced yet? Well just wait. Near the end of the movie, as our mystery builds to a peak, the film dissolves to a man on a stage who proclaims that books allow the reader to put the story down so they can think about the mystery, but movies never do. Therefore, the film offers us ONE MINUTE to think about the crime, revisit the clues, and come up with who we think the murderer is. As the clock counts down, we get intriguing music and shifty-looking shots of every suspect, followed by the clues. Then the narrative resumes, the story concludes, and all is revealed. Something that we can't take for granted is that this is what is called a "fair play" mystery, meaning that if you're paying attention, you can actually figure it out. I tried and was wrong in my guess, but keen-eyed sleuths may have better skill than I. There is no deus ex machina resolution here that introduces vital evidence that was critical to the case at the very last minute (ahem...looking at you, Perry Mason, and you too, Sherlock!), and just like in the game of Clue, the evidence does matter. Tip of the cap to the director, William Beaudine, who most monster kids will remember for helming the 1943 Poverty Row film The Ape Man, one of Bela Lugosi's "Monogram Nine." 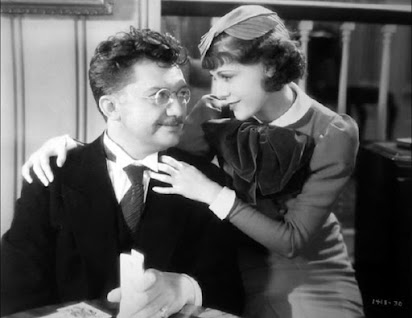 The Crime of the Century comes to us from Paramount by way of Universal as it's one of over 700+ movies that were sold to Universal in 1958 for television distribution. The film arrives on Blu-ray from Kino Lorber Studio Classics with a solid (but apparently not new) HD transfer that's very watchable and mostly clear of excessive scratches and damage. The trailer is included alongside a new audio commentary by Lee Gambin and costume historian Elissa Rose.
Your mileage will certainly vary when it comes to the entertainment value of The Crime of the Century. Technically, it's a Pre-Code movie with no controversial elements (unless you count tight silk skirts with plunging necklines as controversial), and I view it as a fun, larger-than-life--and yes, campy--whodunnit, realized in that inimitable 1930s style that I love so much. Films like this one have really flown under the radar because they're in between genres: not outright horror or paranoid mystery, nor old dark house chamber tale, at least in the cinematically-traditional sense. Also not technically a comedy, but taking this film too seriously would be the real crime.
Blu-ray Frances Dee Jean Hersholt Kino Lorber Paramount Pre-Code review Stuart Erwin The Crime of the Century Universal William Beaudine Wynne Gibson