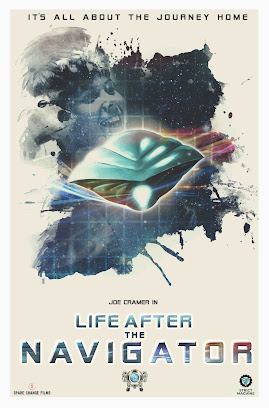 Life After The Navigator is a powerful and truly-inspiring documentary that manages to deftly weave two separate biographical narratives into one cohesive and compelling story. Simultaneously tasked with recounting the making of the cult classic film Flight of the Navigator AND depicting the rise, fall, and rebirth of former-child-star Joey Cramer, the film is brimming with real pathos, human drama, tragedy, and ultimately triumph.
This is a deeply-personal affair. Written, produced, and directed by filmmaker Lisa Downs, there's empathy in every frame. In the hands of another documentarian, the details of Cramer's career and private struggles could (and would) be easily exploited for quick drama and sensationalism. The thing that makes this film (and Downs' previous documentary, Life After Flash) stand head-and-shoulders among other pop culture retrospectives is the care that is taken to humanize people, situations, and deeds. The camera casts no judgement, and the vulnerability she is able to coax from her subjects is astonishing and disarming.
That said, the film also has a celebratory and joyful tone that matches the themes of Flight of the Navigator perfectly. Navigator-director Randal Kleiser is open and warm, and it's wonderful to catch up with his cast, his crew, and even the people behind the special effects. Why was Florida chosen for the film? How is Flight of the Navigator connected to a commercial for Tide laundry detergent? The documentary has answers.
Ultimately, one comes away from Life After The Navigator with a greater appreciation for the 1986 family film, yes, but more importantly, with a deeper connection to Joey Cramer. His personal struggle and eventual redemption feels like the sort of happy ending that Disney dreams are made of. Life After The Navigator reminds us that it's never too late to start a new chapter, and that the biggest adventure is the one that still lies ahead.
Compliance.
Flight of the Navigator Joey Cramer Life After Movies Life After the Navigator Lisa Downs