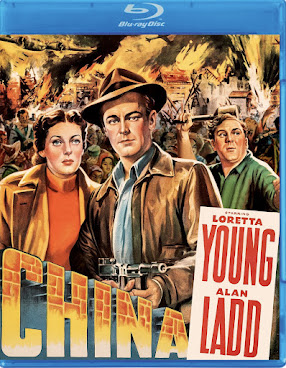 China is an outstanding 1943 adventure film from Paramount set against the backdrop of America's impending involvement in the second world war. Loretta Young (1946's The Stranger) takes the top billing as a compassionate schoolteacher working in China, determined to save as many lives as possible when Japan invades. Alan Ladd (come back, Shane) plays a tough guy profiteer who cares doesn't have time to get attached or involved. Frequent Ladd co-star William Bendix (The Glass Key, The Blue Dahlia) provides comic relief, but he's also part of the moral foundation of this film, pining for the safety of home, but recognizing the sacrifices necessary to do the right thing. Both Young and Bendix bring a spirit of dogged determination in the face of the powerful darkness that pervades this film. 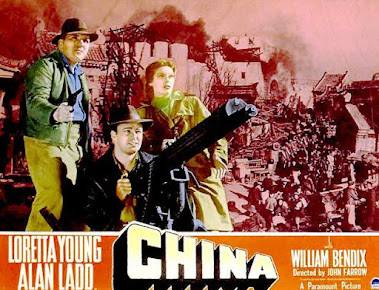 None of this is a coincidence. Director John Farrow is one of many Hollywood professionals who laid down their cameras and took up military service when the fate of the world dangled in the balance. After making well over a dozen pictures at Warner Bros. and RKO, he enlisted into the Canadian Navy in 1939 and served as a lieutenant until he was released from service in 1942 after contracting typhus fever. When he returned to directing that year, he brought his real war experience to the screen in films like Wake Island, Commandos Strike at Dawn, China, and The Hitler Gang. For more about Hollywood during the war, check out the 2014 book Five Came Back by Mark Harris, as well as the subsequent 2017 documentary series. The facts are even more compelling than fiction. 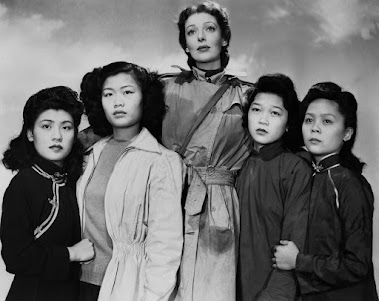 We know we're in for something special from the very first frames of the film, when we're immediately thrust into the action as William Bendix navigates a Chinese village that's in the midsts of being bombed. In one fluid shot, he wanders the devastated streets of the town as buildings burn and airplanes flying overhead. The bombs explode all around him as he staggers, bewildered, from what few places of shelter he can find. The dead are all around, and a baby cries at the corpse of a parent. It's an astonishing way to start a movie, and things never really slow down. 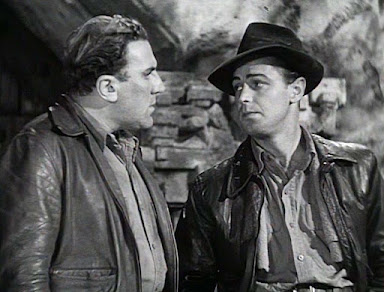 Alan Ladd goes from an uninvested cynic who refuses to get involved to a rah-rah patriot over the course of 79 minutes, but it's hard to not be on board with such a drastic turnaround when this movie pulls so few punches. Nobody--literally no one--is safe from the brutality of war in this film, which has a body count in the dozens, often depicted as graphically as possible. Also worth mentioning, Ladd was only around 30 at the time of this film. He's young and lean and in his shirtless action scenes, almost looks carved out of stone. It's hard to believe that just two decades later, he'd be gone, a victim of his own vices. During this era, when Ladd was a stalwart of the studio system at its pinnacle, he was as much a movie star as Tom Cruise; a man of action with the dogged determination and all the sheer strength necessary to conquer any foe. Watching Ladd in his 1940s heyday is a reminder of what an amazing on-screen presence he still is. 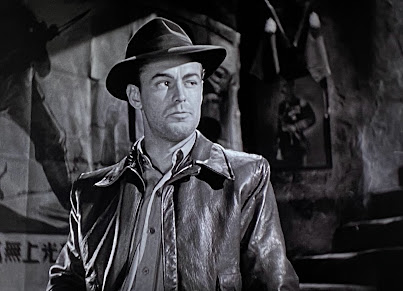 He must have made quite an impression on Steven Spielberg and George Lucas too, because he is clearly one of a handful of major influences on Indiana Jones. In this film, Ladd wears a fedora, a leather jacket, a khaki shirt and pants, has beard stubble on his face, and is called "Mr. Jones" repeatedly throughout the movie. Also add in the fact that so much of the film takes place on the desert roads in World War II transport trucks and supply vehicles, which feels almost identical to the vehicle chases of both Raiders of the Lost Ark and Indiana Jones and the Last Crusade. All this movie needs is a tank! Even the way the Indy films work the Paramount logo into their proceedings feels like an homage to China, and to other movies like it, such as 1954's The Naked Jungle, also from Paramount. Spielberg and Lucas were drawing on a very specific kind of movie tough guy, and Alan Ladd is a vital part of the template for the great American hero. 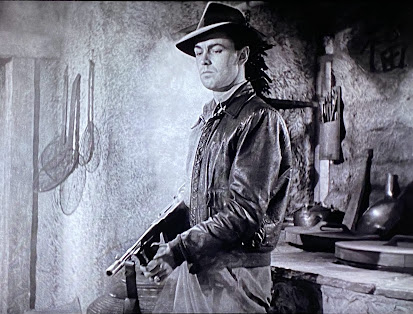 China also attempts some very ambitious special effects and mostly succeeds, even by modern standards. In one action scene, our band of heroes finds themselves on the road in their transport truck as a Japanese plane swoops in on them. They flee the vehicle and take shelter on the side of the road as a nearby freedom fighter armed with a machine gun brings the plane down, which falls into the road and explodes on impact. The scene appears to be a mixture of rear projection, model work, and composite photography, but it works like gangbusters. Again, Indy fans take note. Spielberg and Lucas didn't invent the style of those films, they were homaging it. Movies like China created it. 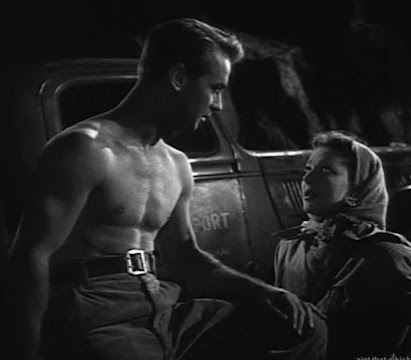 The new Blu-ray from Kino Lorber is wonderful. The transfer doesn't appear to be new, and there's some significant scratches to the print or source negative in the early scenes of the bombing that probably are baked in and come from the special effects work, but the contrast looks great and the sharpness and natural filmic look are miles better than DVD. The Blu-ray contains a new commentary by film historian Eddie Von Mueller, as well as trailers for China and a host of other films featuring members of this cast which are also on disc from Kino Lorber (Calcutta, Whispering Smith, The Stranger, etc).

China is a fantastic film. The cast works incredibly well together, anchored by Alan Ladd in full man-of-action mode. If you only know Ladd from his western work like Shane or the films he made after his lifestyle had taken a toll on his looks and physique, you owe it to yourself to watch this film to see how fit and capable he was at his peak. The action scenes alone are enough to sell this film, but there's a lot more to appreciate, from the special effects to the incredibly dark and violent tone of the film, which gets away with things the Code would never have allowed if so much of what happens in the film hadn't really been playing out in foreign battlefields. Don't miss this one.