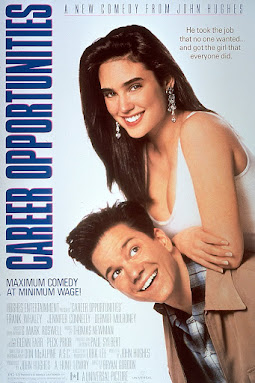 This John Hughes story about a rich girl and a geek who get locked in a Target store overnight feels like fantasy on many levels, and the movie is in service of fulfilling as many of these fantasies as possible. What would YOU do if you were placed in a similar situation? The film ticks every box: eating food from the shelves, using the department store as the world's coolest skating rink, and capitalizing on the near-endless library of music that can be found in the stereo section. Dance party!

As with most characters from the pen of John Hughes, we have archetypes that bleed outside of the boundaries. Frank Whaley is a geek and a liar, but he's also sweet, and his loneliness is apparent. Jennifer Connelly has perhaps NEVER been more loved by the camera than she is here, and her bombshell qualities are on full display, yet she's also not just one thing. She's a rich kid, yes, but she's also vulnerable, and in her own way, just as lonely as the boy she never really noticed over the past 17 years. Even the villains (Dermot and Kieran Mulroney) are drawn with more colors from the crayon box that we'd expect. Both brutal (there's been a murder) and bumbling, Hughes makes sure that we are able to enjoy the bad guys almost as much as the characters we're supposed to be cheering for.

At a spartan 83 minutes, Career Opportunities positively flies by and begs for repeat viewings. It may be lesser John Hughes, but it's occupies a worthy place in his screenplay catalog and embodies much of the whimsy, fantasy, romance, and relatability that we associate with his more famous (and praised) works. Career Opportunities is a delight from start to finish, and is not to be missed.