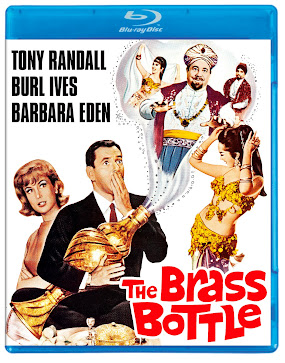 Universal's The Brass Bottle is notable for several things, but most importantly, it's a mid-sixties comedy that features a man accidentally freeing a genie from a bottle only to have a series of delightfully-wacky adventures complicate his life as a result. Oh, and it co-stars Barbara Eden one year before she herself would land the co-lead on television's I Dream of Jeannie.

If those similarities sound impossible to overlook, it's for good reason. Reportedly, The Brass Bottle was a major influence on Jeannie-creator Sidney Sheldon's 1965 genie-themed TV series. Sheldon seems to have made no secret of the film's influence on his own show, which embodies much of the film's visual aesthetic, right down to a scantily-clad female genie, dressed head to toe in layers of pink chiffon. 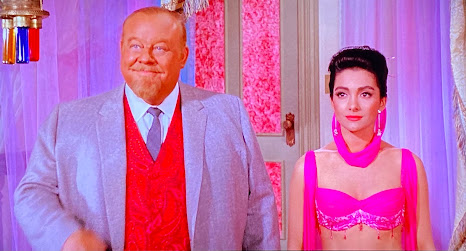 I'm getting ahead of myself, so let me go back to the beginning. The Brass Bottle is a breezy-if-forgettable magical romp in which a former-beatnik architect (Tony Randall, Will Success Spoil Rock Hunter, television's The Odd Couple) with liberal arts tendencies buys a large vase as a gift for his soon-to-be-bride, played by Barbara Eden. When nobody else is around, the bottle gets uncorked and a genie that has been trapped for centuries is once again free, but all is not as expected. Instead of some muscle man or dapper swashbuckler type, this genie is played with mischievous mirth by a rotund Burl Ives, an actor and singer most likely known to readers of this review as Sam the Snowman in the Rankin/Bass classic Rudolph the Red Nosed Reindeer. 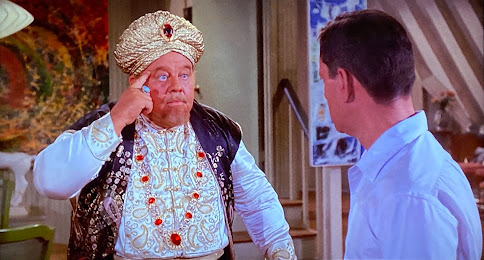 Over the course of 89 minutes, The Brass Bottle wrings every ounce of its premise into the kind of on-screen shenanigans that TV audiences would come to know and love on sitcoms like Bewitched and I Dream of Jeannie. Frequently, Tony Randall finds himself in a jam only to have his genie solve the problem in a magical way that actually makes the trouble even worse. Witness gushing fire hydrants, a man turned into a mule, and an awkward dinner with the future in-laws complete with belly dancers and harem girls. Somebody's got a lot of explaining to do! It's worth mentioning that this film has been adapted from a comedy novel written in the year 1900 by Thomas Anstey Guthrie, updated here for the swinging sixties jet set. 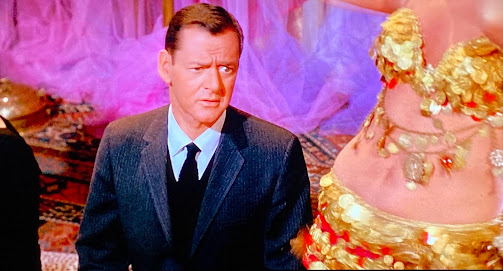 Tony Randall has a lot to play with in this film. He's a nervous guy who just wants order and structure--a precursor to the Felix Unger role he would portray on television a few years later--but his backstory of a bohemian excursion in Paris brings a wildness (if such a word applies) that's beneath his button-down business demeanor, just waiting to burst forth. Barbara Eden is lovely and reacts accordingly as the put-upon fiancee who is wondering if her future husband is losing his mind or having an affair. It's a mostly thankless role for the icon, but she's always fun to watch. The gorgeous Kamala Devi plays Tezra, a female genie in the service of Ives who, once summoned, wreaks all sort of relationship havoc for Randall, and who was CLEARLY a major influence on the look for Eden's Jeannie a year later. The  person having the most fun here is Burl Ives, who brings a twinkle and a hint of menace to the role of Fakrash Al-Amash, the genie who has no intention of ever returning to his bottle. 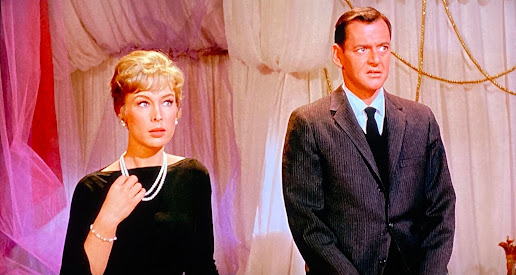 Ives has long been sort of a grandfatherly figure in pop culture, known for his folksy delivery and down-home image. This is a different side of the performer, who seems to be relishing the total power that his character embodies: servant to nobody and in total control. In her autobiography, Barbara Eden recounts being a young, inexperienced actress on the set, and how Burl Ives would stand in his dressing room doorway as she passed and call to her "come here, little girl.." It scared her, and the menace of Ives, given his size and the slightest hint of darkness, comes through in the film. Note: the new Blu-ray from Kino Lorber features an audio commentary by historian Lee Gambin, who presents a recent audio interview with Eden. In the interview, Eden recounts the "come here, little girl" story with more detail, explaining that she now thinks that he was just having fun. 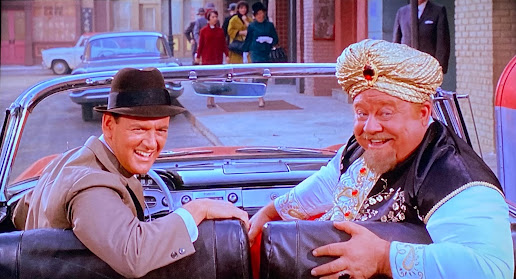 The Blu-ray of the film delivers a quality picture that does not appear to have been taken from a new master. Colors are strong and have more punch than they have in decades. (Full disclosure: the screenshots in this review are taken by phone and appear much more natural on the Blu-ray.) The only extra included is the aforementioned commentary by Lee Gambin, but the interview with Barbara Eden (who turned 90 this year!) runs nearly an hour and covers multiple aspects of her career, including working with Elvis, Larry Hagman, and Tony Randall. There's a lot of overlap with her book, but it's interesting to hear the stories in the context of an interview, which brings a little more depth and color to them than appear on the page. 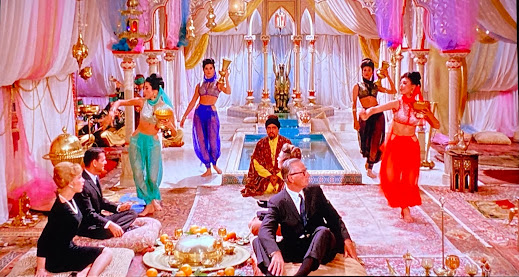 The Brass Bottle is the definition of light sixties entertainment. It's fun, but not laugh-out-loud funny, sexy but not so tawdry that families can't appreciate it together. Lee Gambin refers to it as a warm blanket in his commentary, and that's as accurate a description as any. The fact that The Brass Bottle so frequently feels like a classic sitcom is likely not a coincidence, with this particular brand of magical farce resonating throughout the culture of the time. Several of its cast members would soon find themselves as television regulars, and some, like character actor Parley Baer from The Andy Griffith Show, were trying to make the leap away from television for more regular film work. The Brass Bottle hit theaters in the summer of 1964, and in September of that same year--just a couple of months later--Bewitched made it's television debut. The appetite for campy fun of the slightly-sexy magical variety was high, and when Bewitched and I Dream of Jeannie feel like two sides of the same coin, we must remember that The Brass Bottle predates them both. The film is a genuine delight and is the kind of movie that the term "eye candy" was made for. Fans of a genie called Jeannie, mid-sixties kitsch, and retro culture won't want to miss this one.