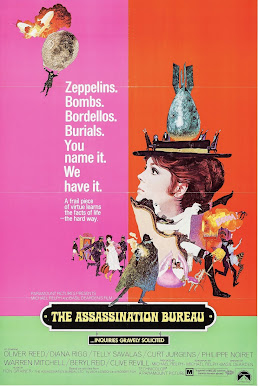 The concept of a secret league of assassins that controls society from the shadows is nothing new. It's been mined for stories in everything from DC Comics to the Assassin's Creed video game series, and rumors of such organizations can be traced back historically for hundreds--if not thousands--of years. But I can't think of any story that has as much cheeky fun with the idea as The Assassination Bureau, a distinctly-British confection hailing from the late 1960's, starring Oliver Reed, Diana Rigg, and Telly Savalas.

Based (at least loosely) upon an unfinished Jack London novel, the premise of the film concerns an international group of gentlemen assassins in the days leading up to World War I. These hoity-toity hitmen will kill anyone if the price is right: after all, everyone deserves to die. But when a spunky journalist (as if there was any other kind!) played by Rigg seeks to destroy the Assassination Bureau (Limited) by commissioning the killing of their leader (played by Reed), things get wacky. With his own league trying to kill him, Oliver Reed must strike first, but that pesky journalist keeps ending up in the thick of the action. 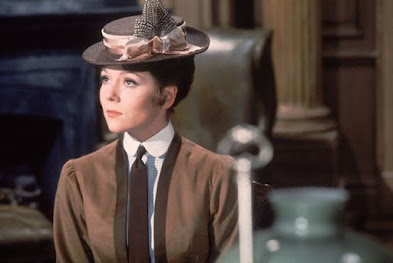 The Assassination Bureau is an odd film to discuss. As Kim Newman states in a video feature that's included on the new Imprint Blu-ray, the movie is too expensive and overstuffed to be an exploitation movie, but too trivial to be taken seriously. It's as if the filmmakers took this silly concept and threw every studio resource available at it. This is a massive film with huge scope and multiple filming locations. There are several massive set pieces, and the film's climax takes place aboard a zeppelin, complete with extensive special effects that were groundbreaking at the time. At some point, someone (anyone) should have said "no, we've gone too far," but nobody ever did, and the end result is an exercise in excess. In a smaller dose, The Assassination Bureau is enjoyable, but taken as a whole, it's a feast with too many courses. I like ice cream, but I don't want to eat four hot fudge sundaes in a row. The film is only 110 minutes long, but it feels much longer because it bounces from location to location, set piece to set piece. 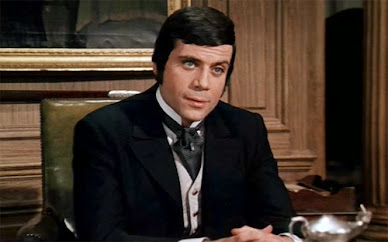 Let me accentuate the positive. Oliver Reed and Diana Rigg are magic on screen. Reed's bad boy tendencies and pub antics are no secret, and they inform our viewing of his character, who seems to be a gleeful trickster dressed up in gentleman's clothing. Reed didn't get to play outright comedy as much as it seems he would have liked (check out 1980's Dr. Heckyl and Mr. Hype to see him fully embrace outright silliness), but this movie gives him a lot to work with. The story frequently has him in some sort of a disguise, and he embraces each one of them with relish, practically winking at the camera as he pretends to be, for one example, a wrinkled and stooped old man, out-foxing his would-be killers with a twinkle in his eye.

Similarly, Diana Rigg, who became an icon as Emma Peel in TV's The Avengers, gets the chance to play both a chaste, duty-bound journalist as well as a lingerie-wearing vixen. She and Oliver Reed have good chemistry as an unlikely "opposites attract" couple, and the movie works best when it uses that chemistry to its advantage. Because of this, the climax of the film doesn't work for me as well as it could have, because the writers decided to separate the two characters for the bulk of the finale. It's yet another decision that defies logic and conventional wisdom. Telly Savalas does shine as the big baddie, literally twirling his waxed mustache and relishing the opportunity to camp it up. Truly, everyone here seems to be having fun. 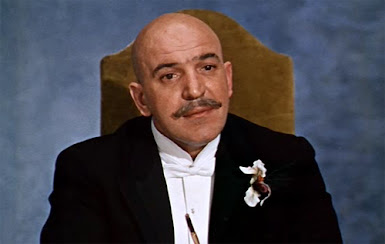 The Blu-ray from Imprint is region free and marks the worldwide debut of the movie on the format. The disc features a 2021 commentary by Kevin Lyons from The Encyclopedia of Fantastic Film and Television website, the aforementioned 2021 assessment by Kim Newman, and Diana Rigg: A Tribute, a new visual essay from Kat Ellinger on the film work of Rigg, who passed away just weeks prior to this disc's release. The film's trailer and a photo gallery are also included.

The Assassination Bureau seems like the kind of movie that was likely on television often in Britain, and I gather that it's comfort food for a certain generation. I was unfamiliar with it prior to this viewing, and found it to be a bit too much in all regards. Still, there's a lot to enjoy, including fun turns from Oliver Reed, Diana Rigg, and Telly Savalas, a bawdy and irreverent attitude that feels distinct to this era of British cinema, beautiful costumes and sets, and a fun premise that finds laughs in the darkest of places. The film's poster sums things up perfectly: "Zeppelins. Bombs. Bordellos. Burials. You name it. We have it." Well, they weren't exaggerating.