Review: The Spider Woman Strikes Back (1946) 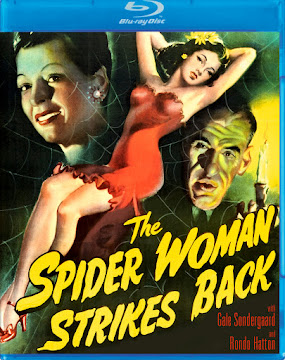 Three years after the Sherlock Holmes adventure The Spider Woman (1943), which co-starred Gale Sondergaard as the titular femme fatale alongside Basil Rathbone and Nigel Bruce, Universal released this deceptively-titled film The Spider Woman Strikes Back. This is not a sequel. Gale Sondergaard takes top billing in this picture and shares most of her scenes with Rondo Hatton, one of the more tragic figures in horror history. The presence of neither is enough to save the film from being one of the final nails in the coffin of Universal's 1940s mystery, suspense, and horror legacy. The Spider Woman Strikes Back is not a particularly well-regarded film by most, and yet I have great affection for it, despite the obvious flaws.

The plot of the film finds a young woman named Jean Kingsley (played by Brenda Joyce) arriving in a small town, having accepted a job to assist a blind woman who lives in a large house at the edge of the village. The blind woman is Zenobia Dollard (Sondergaard), a wealthy and seemingly-benevolent figure whom we are told lost her vision two years before and now resides alone but for the aid of Mario (Rondo Hatton), the disfigured caretaker of the property.

We know something is wrong almost immediately. As it turns out, the past assistants of Zenobia have left town with minimal explanation, though nobody seems to have connected their disappearances with Zenobia or what may be happening within the walls of her estate. Mario (credited as Mario the Monster Man) doesn't speak, and skulks from room to room, even sneaking into Jean's chambers in the middle of the night. All is not as it seems, and as we learn the secret of the Spider Woman, the real horror is revealed.

Part of my affection for this movie is directly related to Gale Sondergaard herself. She's beautiful, elegant, but plays so easily with the darkness. By all accounts, she didn't really want to make this movie (seems like nobody involved in the production really wanted to be there), yet she gives an appropriately nuanced and creepy performance as a blind woman with a big secret. Another huge attraction here is Rondo Hatton, who is something of a cult horror hero. His mask-like face looked like the best Jack Pierce makeup job, but was not a prosthetic. Hatton's career took off in his final years, with five films hitting theater screens between 1945 and 1946. Sadly, he would not live long enough to see most of these films himself, and had passed away before The Spider Woman Strikes Back debuted.

Despite the screen presence of Sondergaard and Rondo Hatton, the movie doesn't really work. It's directed by Arthur Lubin, who hated the material, and as a result, the film contains plot holes, missing scenes, and none of the pervasive dread that accompanies the best Universal horror films. Behind the scenes, Universal was preparing to be merged into Universal International, a transition that would go into effect later in 1946 and would see drastic changes in the company and a moratorium of exactly the kind of low-budget B-picture that The Spider Woman Strikes Back typifies.

Nevertheless, I have great affection for this movie. At a breezy 59 minutes, there's no time to be bored. I love the secret of this house on a hill, I love Sondergaard when she's allowed to be truly evil, and Rondo Hatton makes literally everything he's in better just by his presence. The Spider Woman Strikes Back falls well short of the mark critically, but for fans of genre movie history, there is MUCH to love and appreciate here.

The new Blu-ray from Kino Lorber presents an attractive transfer with good contrast, and is buoyed by a nice compliment of special features, the best of which is a new documentary from Ballyhoo Motion Pictures. Mistress of Menace and Murder: Making The Spider Woman Strikes Back features interviews with some of the best and brightest genre experts and creators, including C. Courtney Joyner, Fred Olen Ray, makeup effects legend Rick Baker, and several others. The documentary short includes personal accounts from Joyner regarding Sondergaard's own reflections of the film from late in her life, as well as discussion on Rondo Hatton and his tragic career. Though all of the featured interviewees acknowledge the shortcomings of the film, their affection for this movie (and for this era of Universal) still comes through. The disc also features a commentary by film historians Tom Weaver and David Schecter, as well as the theatrical trailer.

Universal's genre output in the forties presents a very mixed bag, ranging from tremendous successes (think The Wolf Man) to mediocrity, but there's something intangible and unique among these films that just works for me. Watching The Spider Woman Strikes Back now, 75 years after it was first made, smooths many of its rough edges, even if it doesn't fill the holes in the story itself. Sondergaard is dangerously beautiful, Hatton is hideous and sad. Universal in the 1930s and 1940s has a distinct feeling that nobody else has ever successfully recreated (including Universal themselves), and nobody else ever will. The time, the actors, the studio, the lighting, the mood, the tone...these films call us once more into a darkness that is both strange and delightful, a place that only exists between the frames of these movies from this studio, during this era.