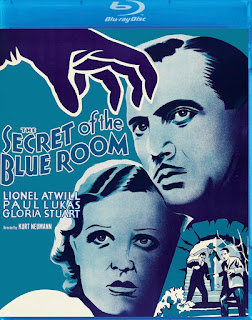 At its core, 1933's The Secret of the Blue Room is a chamber murder mystery in the rich tradition of the "old dark house" subgenre. In fact, some of the sets used in the film itself come from 1932's The Old Dark House, a stellar Universal chiller. The formula for these films rarely strays: throw a group of people with lots secrets into a house, find a reason for them to spend the night, and then let the murder begin--and with it, the suspicion as trust erodes and they begin to turn on one another. The Secret of the Blue Room successfully trades out horror for more of a mystery atmosphere. This is a film of antique tapestries, long hallways, dark shadows, and secret passages. While other movies would later do a very similar thing (many come to mind, ranging from The Cat and the Canary to Clue, and more recently, Knives Out), this film is elevated by it's pre-Code status and the elegance of the sets themselves. Films from the early thirties have a distinct feeling, and this film is made more memorable because of its trademark Universal style.

For instance, both the opening and closing credits (a good cast is worth repeating!) of The Secret of the Blue Room feature music from the ballet Swan Lake, and it's the same music that would accompany Universal's Dracula, The Mummy, and Murders in the Rue Morgue. The music instantly invites us into Universal Monster Land, though the only monsters here are human.

Gloria Stuart, who had also starred in The Old Dark House the previous year, appears here as Irene von Helldorf, the center of the movie's attentions and the object of affection for most of the houseguests who find themselves within a dark castle late at night. Stuart is perhaps most famous for her role in 1997's Titanic as the elderly Rose character ("Titanic was called the ship of dreams...and it was"), some 64 years later. Talk about longevity! Also appearing in the film are Lionel Atwill, Paul Lukas, Edward Arnold, and Onslow Stevens. Each of these men are connected to Irene in some way, and when they hear a story of three murders that occured twenty years prior in the castle's "blue room," the decide to take turns tempting fate in the deadly chamber. Things go exactly as expected, but who is behind the murders and why?

Running a scant 66 minutes, this is another breezy and engaging thriller from a studio that excelled at atmospheric delights. The climax breaks things up visually, as we get a chase in the catacombs beneath the castle, a gunfight, and even fisticuffs. This was reportedly the cheapest movie Universal produced during 1933, shot in only six days on pre-existing sets. German-born Kurt Neumann directed The Secret of the Blue Room, and would go on to helm several Tarzan films (spanning Johnny Weissmuller and Lex Barker) for RKO, She Devil for Regal, and is perhaps best remembered for directing 1958's The Fly starring Vincent Price. The Secret of the Blue Room was also one of the 52 films that Universal packaged for television in 1957 for their "Shock Theater" syndicated program, usually introduced by a local horror host character.

Kino Lorber's new Blu-ray looks absolutely fantastic, boasting nice contrast and a good grain structure, with the looming shadows feeling as ominous and dark as they must have looked on theater screens in 1933. Safe to say that The Secret of the Blue Room has likely never looked this good on a television screen. The disc includes a commentary by filmmaker/historian Michael Schlesinger and trailers.

The Secret of the Blue Room is a fun mystery with an attractive cast, an engaging pre-Code Universal aesthetic, and gorgeous sets. It leans more toward mystery than horror, but is a great example of why Universal's output during its classic era remains exceptional and is fondly remembered.