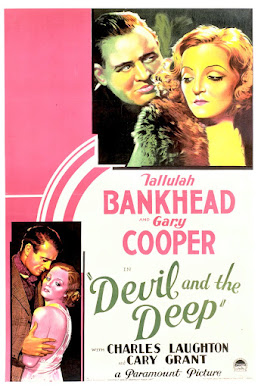 A stunning, powerful pre-code drama from Paramount that features Tallulah Bankhead, Gary Cooper, Cary Grant, and Charles Laughton in his big-screen debut!
Laughton plays a submarine commander who is married to Tallulah Bankhead. Jealousy of his wife and how she's spending her time has driven him mad...or perhaps he was mad all along and his jealousy is what drives him into a complete break with reality. When he incorrectly suspects an affair between his wife and his lieutenant, played by Cary Grant, he has Grant transferred and replaced by Gary Cooper. Ah, but Tallulah and Cooper have already met, and shared a steamy one night stand in the desert night. They didn't realize that their tryst would tie them together with tragic consequences.
The drama culminates on a submarine endeavour with a catastrophic climax, as the lives of every person on board hang in the balance, with Laughton's mad, suicidal (and homicidal) behavior leading to a final confrontation with the two people he blames for his downfall.
This film is magnificent! Laughton had been a star of the stage and transitions to the screen like a pro, making a strong negative impression as a petty, jealous and insecure man who beats women and ruins the lives of the officers beneath his command on nothing more than baseless suspicions. His unlikability is staggering, and he plays each camera close-up with smug relish. Tallulah Bankhead is as impeccable as always, bringing her unique blend of glamour, strength, and power to the role. Bankhead's public struggle with her vices (alcohol, drugs, sex, etc) always informs her performances, giving her screen appearances a nuance and a depth that would soon be lost when the Hays Code began to crack down on the immorality of cinema. Her behavior would even land her on the "Doom Book" of actors and actresses that were declared to be unsuitable for the public. Gary Cooper is a bit wooden (a criticism I often have of the actor), but Cary Grant, in his few scenes, is as charismatic as ever, even this early in his career.
We viewed this film via the 2021 Kino Lorber Studio Classics Blu-ray, which has an incredible transfer featuring delicate grain structure and beautiful contrast, though there is some age-related scratching and wear to the film, as should be expected. The disc includes a commentary by David Del Valle.
The common thinking about early cinema is that it was safe, tame, and inoffensive. Devil and the Deep exists to smash those notions, or rather, to drag them to the bottom of the sea. This is a film of lust, infidelity, jealousy, and attempted murder on a massive scale. The climax on the submarine at the bottom of the ocean floor is unnerving, and the camera lingers on one particular drowning long after modern films would cut away. Very early appearances from Cary Grant and Gary Cooper make this worth note, but the outstanding work from Tallulah Bankhead and Charles Laughton send this one straight to the "must see" list.
1932 Cary Grant Charles Laughton David Del Valle Devil and the Deep Gary Cooper Marion Gering Paramount pre code Tallulah Bankhead