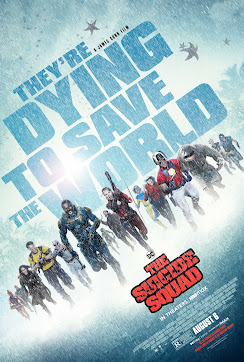 When I learned that James Gunn had been fired from Guardians of the Galaxy III by Disney back in 2018 over decade-old social media posts, it seemed inevitable that the competition would come knocking on his door. I could almost see the email: "Hey James, it's *redacted* from Warner Bros! Just saw the news about you and Disney. Listen, we'd LOVE for you to come here and do for the DC brand what you've done for Marvel. We'll give you a huge budget, and you can do whatever you want. Make us a Guardians of the Galaxy movie with DC characters!"

When the trailers for The Suicide Squad (not to be confused with 2016's Suicide Squad) surfaced in the lead up to this movie's release, it sure did look an awful lot like Guardians of the Galaxy with a fresh coat of paint and an R-rating. I hoped I was wrong.

I was not wrong.

The Suicide Squad is Marvel's Guardians of the Galaxy if Guardians of the Galaxy had no boundaries, limitations, or likeable characters. It's an angry movie (understandably, given where it came from) full of cynicism, irony, and violence in service of nothing aside from anarchy. One action scene leads into another action scene as the body count piles up in increasingly-graphic and disturbing methods of death. Did I mention the irony? Seriously, metric tons of irony. This movie carries a smirk from start to finish.

The comparisons to Guardians are unavoidable: ragtag outsiders and slackers, a wrestler-turned actor, a CGI misfit that we're supposed to grow fond of as the film unfolds, and a soundtrack of a.m. radio gold that's often played in contrast to what's happening on screen. Entire scenes and set pieces are lifted directly from the Guardians of the Galaxy movies, too. How about an escape from a heavily-guarded prison facility? Or how about an action scene in which one character (you know, the quirky one) takes out an entire army single handedly while an oldies song plays on the radio? This movie is cut from the same cloth as one of Disney's greatest triumphs, minus the likable characters, the good humor, and a story that's in service of a larger picture. 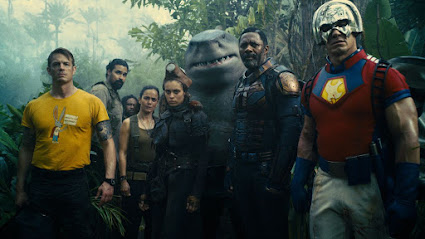 We shouldn't be surprised. James Gunn cut his directorial teeth making movies for Lloyd Kaufman's Troma Studios, the home of The Toxic Avenger and Cannibal: The Musical, and he's rooted in horror and B-movies. That's actually a very cool thing in my book, and it was fun to see him paying homage to his trash roots in some of his earlier blockbuster fare. I like trash movies. But I don't like very expensive trash movies that take up the financing dollars and cinema space of smaller creators and voices. In The Suicide Squad, Gunn indulges every B-movie whim like a kid in a candy store. But this is not a B-movie, it's a massive tentpole film with every ounce of the studio's resources behind it.

Something to remember: James Gunn does not like big studio movies. If you've ever heard an interview with him or listened to his commentaries, he makes no bones about his intentions to subvert the safe, boring expectations of the typical movie goer. In Guardians when he wrote a scene in which the main characters assembled and walked toward the screen in slow motion, Armageddon-style, he undercut the cheesiness of the moment by having one of the characters tug on their crotch. Yet in The Suicide Squad, he does the same thing again, not once, but twice. It pains me to say this, but The Suicide Squad seems incredibly patronizing.  For a director who has always been fairly honest about his disdain for populist entertainment, maybe this is his ultimate revenge against both the audience AND against Disney. 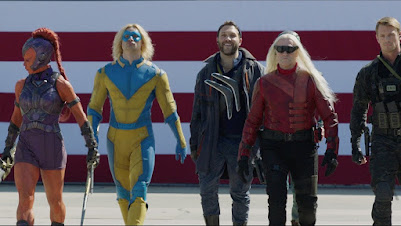 But we can't lay this solely at the feet of James Gunn. Warner Bros. is the real smoking gun here. In recent years, the studio, in desperate need of a creative compass, has chased every competitor's success, redirected their franchises mid-stream, and shown little to no understanding of the characters in their stable, some of which are over 80 years old and have a tried-and-true formula and appeal. It actually seems that Warner Bros. is embarrassed by their stable of icons, and has gone to great lengths to change them and redefine them into something that longtime comic fans no longer recognize. Fans of the Suicide Squad comic, especially the run by John Ostrander which began in 1987 (the Suicide Squad name in DC Comics goes back to 1959), will find nothing of the characters they love, or the noble missions with life on the line. But hey, there are poo poo jokes.

I'm predicting this movie will make a ton of money (I'm writing this on opening day), but in a world where the online community attacks Kevin Smith's Masters of the Universe for not serving the "true fans" and pushing an agenda, will the same backlash be leveled against The Suicide Squad, which features race swapping, gender swapping, and pulls a bait-and-switch in the first ten minutes? It would be hypocritical for them not to, right? RIGHT? Someone once told me they hated Disney's Captain Marvel because a female character beat a male character in a fight. In this movie, a female character takes out an entire army. It's actually one of the coolest scenes in the movie and features a wonderful use of Louis Prima's "Just A Gigolo," but it's possible that this movie packages its subversion in such a pleasing package that the typically-outraged audience will be silent. We'll see.

I'm already seeing rave reviews for The Suicide Squad, but I have to imagine time will not be kind to this movie. It's a cynical film for a cynical age, but there's so little story filling this two hours and twelve minutes that I can't imagine people coming back to it. We've got another extinction-level threat--kudos to Warner for drawing on DC history by using one of the first enemies of the Silver Age Justice League--and literally disposable characters hacking and shooting their way through mountains of bodies as they march toward what is ultimately a video game boss battle. But it's in service of nothing. Character development is virtually non-existent. When the movie tries to have a heartfelt moment in the finale, it's done nothing to earn it or to make us care. What does it say when my favorite character in the movie was a CGI shark? To be fair, he is voiced by Sylvester Stallone. 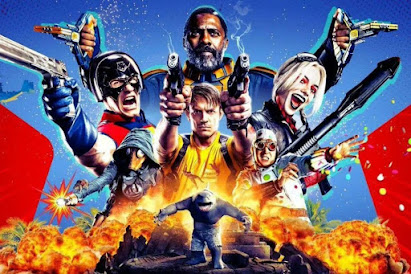 Sometimes when I review something and have a negative reaction, people say "turn off your brain and just enjoy the ride." I've never understood how they're able to accomplish this. To me, it's like saying "hold your nose and enjoy this food." How? Doesn't the enjoyment actually come from savoring the characters, watching how they grow, and experiencing a story that unfolds in ways that engage our brains?

I really wanted to like The Suicide Squad. I am a fan of multiple members of the cast, and I'm a fan of James Gunn. Unfortunately, this seems to be a director working through some serious anger issues because of his experience with Disney, and he's made a movie that has lots of action, but almost nothing else, including plot or character development. As a long-time comic book fan of the DC Universe, there's almost no sign of the characters I've enjoyed for so long, and no work is done here to build up or establish this new version of the characters, either. I honestly have no idea who this movie is for. It's not for the dedicated comic fan, because most of the characters are absent or unrecognizable. It's not for the Disney crowd who made Guardians of the Galaxy a huge success, because this movie is rated R. It's not for B movie or indie/cult fans, because it's a $185 million big studio spectacle. It's not for the fanboys, because it contains gender/race agendas they despise so much. Ultimately, I can only say who this movie was NOT made for, and that's me.

The Suicide Squad is now playing in theaters and on HBO Max.