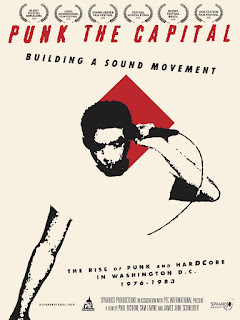 At first glance, the heart of American democracy may seem like a strange place for punk music to take root. Upon further examination, it makes perfect sense. Punk--bourne out of rebellion, inspired by injustices and the malaise of society, institutions, corporations, WHATEVER--will thrive in the places closest to the source of that frustration. What could be a better breeding ground for outspoken voices than the capital of the United States?

Punk the Capital documents the Washington, D.C. punk movement from its birth in 1976 through 1983 and chronicles all the tumult and uncertainty of that era. Through first hand-accounts of those who were there, as well as archival footage of news items, live shows, even radio interviews, we're a fly on the wall as a spark becomes a flame. We see how the resentment toward commercial radio, the corporatization of art, and the dissatisfaction of the status quo leads to the gestation of new, wild sounds that harken back to the earliest days of rock and roll. Dangerous music. Music with a message. Music that is the manifestation of rage, defiance, dissatisfaction, ambition, pride.

The film covers seven years of punk history, but it feels like a lifetime. In terms of cultural trends, seven years might as well BE a lifetime. Many different subgenres of punk are covered, often by those who lived it, from old hippies through the hardcore movement, and even the straight edge scene in which substances like alcohol and drugs were abstained from as a statement against the excesses of the era. Through it all, we're guided through this living history by music and stories from Teen Idles, Minor Threat, The Slickee Boys, Bad Brains, Black Flag's Henry Rollins, and more. It's so interesting to see how these wild teens have developed into adults that still exist on the fringes and retain their outlaw spirit, but have also grown in surprising ways. Punk never dies. It can start a business, see commercial success, become respectable in the community, and even exist within an establishment, but the punk mentality never goes away.

Punk the Capital does an outstanding job of weaving together compelling narrative--an audio/video assault on complacency--but also in letting us hear (and almost more importantly, SEE) the music, the anti-fashion, and the power (danger) when people come together with a shared mission and ideology. It's a beautiful thing.

All in all, the documentary runs about 89 minutes, but one can't help but think that the archives must be packed with hours upon hours of interview and footage. The DVD and Blu-ray of Punk the Capital contains four additional bonus films totalling 50 minutes, including a look at Scream, Dave Grohl's pre-Nirvana band.

Punk can often be an overlooked chapter of rock and roll history, but it's such a vital part of the story.  Musicologists and rebels will do well to check out Punk the Capital, which is available on disc, video on demand, and virtual screenings.

Punk the Capital on Dischord Records