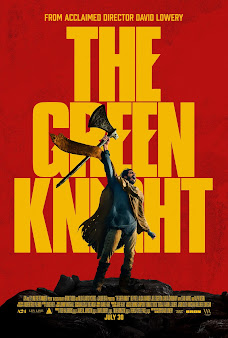 David Lowery's big screen interpretation of one of medieval literature's most famous tales is complex, ambitious, thoughtful, and provocative.

The Green Knight (2021) is the latest in a long line of screen adaptations of the 14th century story of Sir Gawain and the Green Knight, a classic tale in the romantic, chivalric tradition that recounts the tale of one of Arthur's knights and a quest for honor against the titular Green Knight, a supernatural character that seems to promise certain death. Dev Patel (Slumdog Millionaire) plays Gawain, a young man (here he is Arthur's nephew, though our weary king is never identified as the mythic monarch) who is brash, headstrong, and seeking adventure. When The Green Knight--here, literally a man who is composed of nature itself, as if he was formed from a living, moving tree--rides into the King's hall on Christmas day and issues a challenge in the guise of a game, Gawain accepts. The consequences of this challenge set Gawain forth on a quest that will push him beyond his limits and forge him in fire...if he survives. 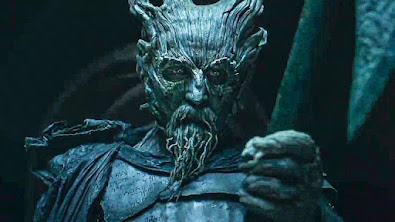 Part quest, part romance, part fable, part morality play, the story itself is full of danger and mystery with elements that horror fans will likely receive well. And yet, director David Lowery has made something that will not likely appeal to mainstream audiences used to popcorn-fueled spectacles, nor is his film likely to please fantasy film fans who flocked to theaters to visit of Middle Earth in The Lord of the Rings and The Hobbit trilogies.

The Green Knight is more complicated.

Lowery has made something that is unapologetically medieval. Gone are the sprawling symphonies from massive orchestras that stir our sense of adventure. In its place are medieval instruments, monastic chants, and the kind of vocalizations that one might expect to hear at a Catholic Mass. This is a deeply-personal journey for Gawain, and as such, the music supports this introspection. Moments of tribulation, danger, and astonishment are supplemented by digital bass drops and horror movie audio techniques to wonderful effect.

The movie also takes its time and doesn't rush. This is not an action film, it's a quest for identity, for honor. Those expecting battles and swashbuckling derring-do will likely find themselves disappointed. The audience accompanies Gawain on this quest, and we learn of his quality as the film unfolds slowly, through his deeds and how he treats others. This is the sort of movie that is best described as a "slow burn." I found myself thinking of this movie, distributed by A24, as an extension of the spirit embodied by Handmade Films, the British production and distribution company founded by ex-Beatle George Harrison and Denis O'Brien, which specialized in quirky, eccentric, unconventional films that had a strong authorial voice. 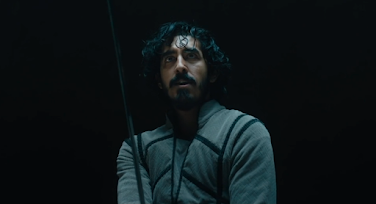 It's also a movie oozing with an unconventional style that mixes stark realism with dark magic. The kingdom itself (Camelot is never mentioned) is brown, dry, dead. Arthur is in decline, and he now struggles to lift his sword. Think John Boorman's Excalibur by way of Terry Gilliam, as Lowery clearly has a sense of humor and whimsy that at times feels delightfully at odds with the serious tone of this tale. This is also a world that is deeply rooted in the Anglo-Saxon tradition. There are Christian beliefs, but pagan ones as well. Magic is real, and nature has a voice. Much care and attention has been taken to make this movie look and feel like a glimpse into the long-distant past of the England of long, long ago, complete with the reality of the supernatural.

Performances are uniformly fantastic with Dev Patel carrying most of the movie on his capable shoulders and conveying the journey of his character--the physical and the emotional. Alicia Vikander (Tomb Raider) has multiple roles to embody (no spoilers) and brings something unique to each of them. Joel Edgerton seems to embrace his role with relish, and long-time Arthurian movie fans will note that he played Gawain in the 2004 film King Arthur, which brings a nice passing of the torch to The Green Knight.

This is a hard movie to recommend because it's absolutely not for everyone, but that's what makes me appreciate it so much. For the right audience, there's so much to admire and appreciate. Director David Lowery's fingerprints are all over it (he also wrote the screenplay), bringing this movie a sense of personality that is very uncommon for a movie with this subject matter. The Green Knight is perhaps best viewed as a study in contrasts: darkly horrific, but also whimsical. Mercilessly realistic, but also full of magic and the supernatural. Driven by a singular quest, yet in no hurry to arrive at its destination. 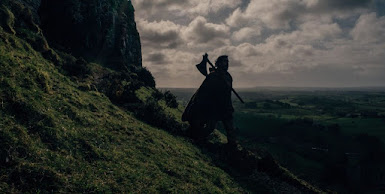 I think I love The Green Knight. I certainly can't stop thinking about it, admiring the dark, medieval elements that would have made Professor J.R.R. Tolkien smile and nod in appreciation (Tolkien himself famously adapted this tale from Middle English), but the movie is also not afraid to have a unique style and a playful tone. The tale of Sir Gawain and the challenge of the Green Knight has been told at feasting tables and around campfires for over 600 years. And that's what David Lowery's film adaptation feels like: a campfire tale told with new techniques, but retaining the same mysticism, chivalry, and excitement that it undoubtedly embodied on those cold medieval nights, hundreds of years ago.

The Green Knight is now playing in theaters.