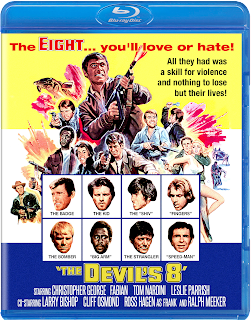 "All they had was a skill for violence and nothing to lose but their lives!"
1969's The Devil's 8 is often compared to The Dirty Dozen, which had wowed audiences two years before by combining the familiar "men on a mission" story with rich character development and gritty violence. In truth, this sort of nihilistic approach was becoming more and more popular in the Vietnam-era, and films with expendable characters from the wrong side of the tracks were big audience draws. Exploitation/genre studio American International Pictures had been riding a huge wave of success off the back of a string of bikers-gone-wild pictures such as 1968's The Savage 7, and the appeal of watching a group of anti-heroes take on insurmountable odds while dying in the process seemed like a safe box office bet.
The Devil's 8 switches up the setting from the battlefields of war to the backroads of moonshine country. The plot in brief: federal agent Faulkner (Christopher George, Grizzly, Enter the Ninja) springs a group of hardened criminals from prison. Each of them had been serving a life sentence with no chance of freedom, and each of them is adept at a certain skill. We have a mechanic, a driver, a fighter, and so on. The mission is simple: infiltrate a moonshine smuggling operation and uncover evidence to bring down the ringleader, played by Ralph Meeker, who also appeared in--you guessed it--The Dirty Dozen. Faulkner has a short amount of time to whip his team into shape and send them on a suicide mission from which they may not come back.
In terms of setting, The Devil's 8 carries the same story DNA that we'd see in everything from pulp novels (The Executioner series featuring Mack Bolan also began in 1969) to comic books (The Suicide Squad from DC Comics, adapted into two feature films), but the switch to rural backwoods does wonders to keep the action feeling fresh and fun. Instead of sniper towers and military barracks, we've got moonshine stills and rundown log cabins. Instead of Nazis and disciplined soldiers, we're given country folk in trucker hats and bar fights. AIP is leaning on all the proven exploitation traditions here, with lots of car chases, stunt driving, and the sort of outlaw spirit that movies like Smokey and the Bandit would take to even more mainstream commercial success during the 1970s.
Christopher George is no Lee Marvin, but he plays both sides of his character well. We see him as both the smooth, tuxedoed government agent and the rough-and-tumble, grubby man of action. His handsome face carries stubble and a sneer for most of the film. Former teen idol Fabian gives a nice turn as an alcoholic with a noble streak. Ross Hagen (The Hellcats, The Mini-Skirt Mob) is a former moonshine runner who serves as the linchpin to the whole operation.
Another thing that sets The Devil's 8 apart from its peers is its soundtrack. There's a jaunty country-rock twanger that runs under virtually the entire film, offering counter-balance to some of the violence on screen. Think of the music from The A-Team and how the catchy, hummable theme song plays against huge machine gun and grenade warfare and massive amounts of property damage. The catchy song from The Devil's 8 accompanies several major on-screen deaths and when the climactic showdown occurs at the end of the film, the music kicks into high gear, as if to say "don't forget to have fun!" Finally, when the film ends and the credits roll, we get the FULL payoff in the form of the FULL theme song complete with lyrics that describe the plot of the movie and each of the characters! It's absolutely magnificent.
This drive-in gem is also notable as the first feature film co-screenwriting credit for John Milius, a USC grad who would soon rise to higher prominence as one of the faces of The New Hollywood thanks to films like Jeremiah Johnson and Big Wednesday. Milius is not particularly proud of his early work, but watching The Devil's 8 serves as a reminder that everyone starts somewhere and that interesting ideas can often be found in surprising places.
Scorpion Releasing have partnered with MGM and Kino Lorber to bring The Devil's 8 to Blu-ray with a new 2K scan. The source is not in the best condition, with visible damage in certain scenes. There are also soft shots that result from opticals and editing techniques. In short, this this was never a beautiful movie. However, for drive-in fare such as this, what we're presented with is quite serviceable and probably as close as we're going to get to how the movie looked when it first played on screens over 50 years ago. The restoration team is to be commended for serving up such an accurate warts-and-all presentation, and at times the film does look really fantastic. A new 2021 interview with actor Larry Bishop (Kill Bill Vol. 2), who played Tim aka "Fingers" in the movie, is included and features some behind-the-scenes information on the shoot itself. Bishop speaks of his friend, producer/director Burt Topper, with great affection and discusses their other collaborations.
At only 98 minutes, The Devil's 8 is a breezy and fun movie filled with all the rougher, jaded elements of 1969, but filtered through multiple layers of big commercial fun. It's endlessly enjoyable to watch anti-heroes that we identify with take on moonshiners armed to the teeth in a new kind of war, one that felt much closer to home. All these years later, the action is fantastic, the music is memorable, and the performances from our flawed-but-likeable band of misfits are satisfying. Exploitation and genre movie fans take note.
Order from Kino Lorber
Order from Amazon
AIP American International Blu-ray Christopher George dirty dozen Fabian Kill Bill Kino Lorber MGM Quentin Tarantino review Scorpion Releasing Soundtrack The Devil's 8 war