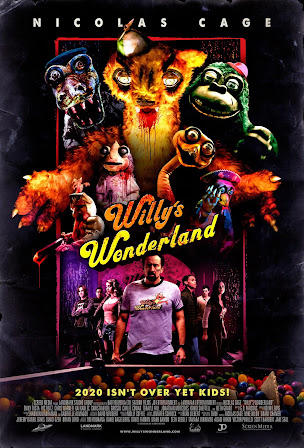 Willy's Wonderland is a fever dream of a film: strobing lights, bizarre music and imagery, and a premise that's askew from what we're expecting, at least in execution. Sure, this is a movie about a 1980's family entertainment center, complete with animatronic animals that come to life and kill, as no doubt inspired by the Five Nights at Freddy's franchise. Yep, it's also starring Nicolas Cage, an actor who has embraced surrealism and baroque performances the likes of which audiences haven't seen since Vincent Price.
Somehow, in spite of these predictable ingredients, Willy's Wonderland still manages to surprise. Part of the fun the film offers is that IT knows that WE know this story already. Killer robots in a kid's party palace? Yup, been there, done that. So the film serves up the action and thrills in a way that feels both satisfying and as original as it can be, given the tropes it wants to play with.
The biggest delight for me is, believe it or not, Nicolas Cage. I'm on record as not being a fan of Cage's BIGGER and more self-indulgent performances, and yet, his approach to Willy's Wonderland is one that we've never seen from him before. In what I hope isn't TOO much of a spoiler, the biggest twist here is that Cage doesn't utter a single line in the entire film. Without his unique line delivery and ability to twist dialogue, the actor must rely entirely on facial expressions and body language. It's a really fun and interesting experiment. In the behind-the-scenes features on the Blu-ray, Cage name-checks silent performances by Harpo Marx, Buster Keaton, Charles Bronson in Once Upon A Time in the West, and his own pet iguana as the inspiration for his approach to the role. It's a very Nic Cage kind of thing.
The movie also doesn't get overly bogged down in details or minutiae. We get all the backstory that we need about Willy's Wonderland and the evil within the building, but Cage's character is a complete and total mystery. He doesn't even have a name! Where does he come from? Why is he so good at fighting? What is the stuff he keeps pouring down his throat at regularly-scheduled intervals? These questions are never answered, and I actually love that. Like the Man with No Name in Sergio Leone's Dollars trilogy, where he comes from and where he's going are not important to this story.
Willy's Wonderland is no masterpiece, but it's a fun way to spend 90 minutes, and manages to be satisfying across multiple genres: horror, comedy, action, and even western. It's the kind of movie that a studio wouldn't dare touch in this day and age, but that feels like it carries the fingerprints of its creators in the best of ways. It's completely absurd, and in a movie landscape filled with existential superheroes who wrestle with the darkness, this goofy little five million dollar film manages to put so much spectacle and eye candy on the screen, it's hard not to like.
animatronics Chucky Cheese Five Nights at Freddy's G.O. Parsons horror Kevin Lewis Nic Cage Nicolas Cage pizza review Showbiz Willy's Wonderland