The Last Hoorah by Stephen Lackey

It’s hyperbolic, the title I mean. Theaters will reopen, but they may never be the same post pandemic. This summer they attempted a soft reopening and it was truly only for one film; TENET. Christopher Nolan pushed hard, leaning on the contract for the film, to ensure that the film only premiered in theaters, and shockingly the studio responsible for the film, Warner Brothers stood by him. The question is why? Why did this film over all films “require” theatrical viewing? I won’t be spoiling TENET here, but I will attempt to answer the question, and share my own experience seeing the film in an IMAX theater.
To get quickly to one point, I am thankful I had the opportunity to see TENET in the IMAX. Getting back to the hyperbole (I hope it’s hyperbole anyway), if this is the last film I will see in a cinema, it’s like having the best gourmet meal of all time for the one’s last meal. Is it because the film is that good? No. TENET is ambitious, and fantastic, and cerebral, but it’s also flawed in places mostly due to its immense ambition. Flaws from ambition are common in Nolan films and that’s okay because the good always outweighs the flaws, and TENET continues the trend. The thing that TENET does is that is so special, and will matter historically, is just how much of a love letter the film is to the cinematic experience.
Many modern movie watchers who revel in the convenience of streaming or even old school physical media collectors have forgotten what the cinematic experience truly is. Being a filmmaker I cherish the experience just as a painter appreciates seeing a painting hung with love and presented in the best possible way rather than leaning against a wall beside a sofa behind an end table. I am a huge fan of John Carpenter. It was a simple scene in a Carpenter film, a toss away scene for most folks, that educated me on the difference in watching a film at home versus at the theater.

I have watched and loved Halloween my whole life, seeing it for the first time as a child on cable and again and again on home video. When I finally saw a film print, projected in a theater, with some people in the audience who had never seen the film before, I truly began to honor the experience of seeing movies in the right setting, just like going to a museum for art. In the movie, there is a scene where Laurie and her friends are walking along a sidewalk chatting. It eventually leads to a scare, but the scare isn’t the thing: it’s the stroll along the sidewalk. That scene utilizes the first modern version of the Steadicam allowing the cinematographer to pan and walk smoothly without losing the characters. In the theater, the scene eats the entire screen engulfing the audience in this neighborhood and making the characters feel small and vulnerable, making the scare work for me like it had never worked at home. That moment of realization was pivotal for me, and answered the question of why filmmakers that make movies for theaters really want them seen there. The hive mind experience just added an additional layer to the experience, being in the room with people reacting at scares, humor, and emotional beats. There’s just nothing like it.
Now to TENET. As I mentioned, Nolan had lofty intentions for the film. Outside of the story Nolan set out to make a real, old school Hollywood cinematic experience. Sure, all of his films are beautiful, but TENET steps further away from the tropes of digital post production and TV style creation than any previous film he has done. A huge chunk of TENET is shot with IMAX large format cameras meant to up every inch of the massive building sized screens in those theaters offering an incredible level of immersion that had more impact than the best 3-D could ever do. For TENET, it didn’t just kick into IMAX format for big action, it worked for emotional beats allowing you to truly see the feelings being imparted by a character sometimes through deep close-ups that filled your periphery. Nolan also chose to shoot with miniatures and stuntmen--rather than CGI backgrounds and practical FX with CGI created characters--allowing him to get in close and really fill the screen with the events as they unfold. TENET utilizes less CGI than a typical romantic comedy. TENET has more in common, when it comes to filmmaking, with Lawrence of Arabia than a typical Marvel/Disney movie. 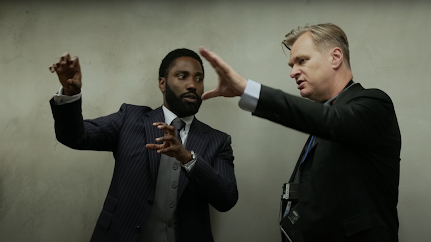 I believe every film, regardless of how it’s made, is crafted with love. Even the film that’s simply made as a quick cash grab has a crew that loves the fact that they are working on a movie and loves what they do. Nolan, though, set out to tell a big story, and to craft a love letter to the cinematic experience. Unfortunately for Christopher Nolan and Warner Brothers, global circumstances made going to the movies an even harder sell just as the love letter was ready to be shared. I’m hoping down the line once this pandemic is under control that TENET is re-released in theaters, and in IMAX in particular, so it can be experienced the way he intended, because it will feel like a much different story in the theater versus at home, even on a 65-inch TV. Once things are back to normal, go see it if it is playing near you. Go see Halloween in your local arthouse theater,  and I believe you’ll see how much more important and impactful that little sidewalk stroll is compared to watching it at home.
****
Stephen Lackey is an award-winning documentary filmmaker that focuses on quirky character stories. He has documented comic book creatives and fanatical fans, dinner theater dramas, and haunted attraction horrors. Stephen has written for Cinescape, Comics2Film, TV Verdict, DVD Verdict, Geeks of Doom and a variety of other outlets. Stephen is always working on the next documentary film and seeking out the newest and hottest hot sauces.
Christopher Nolan director filmmaker Stephen Lackey